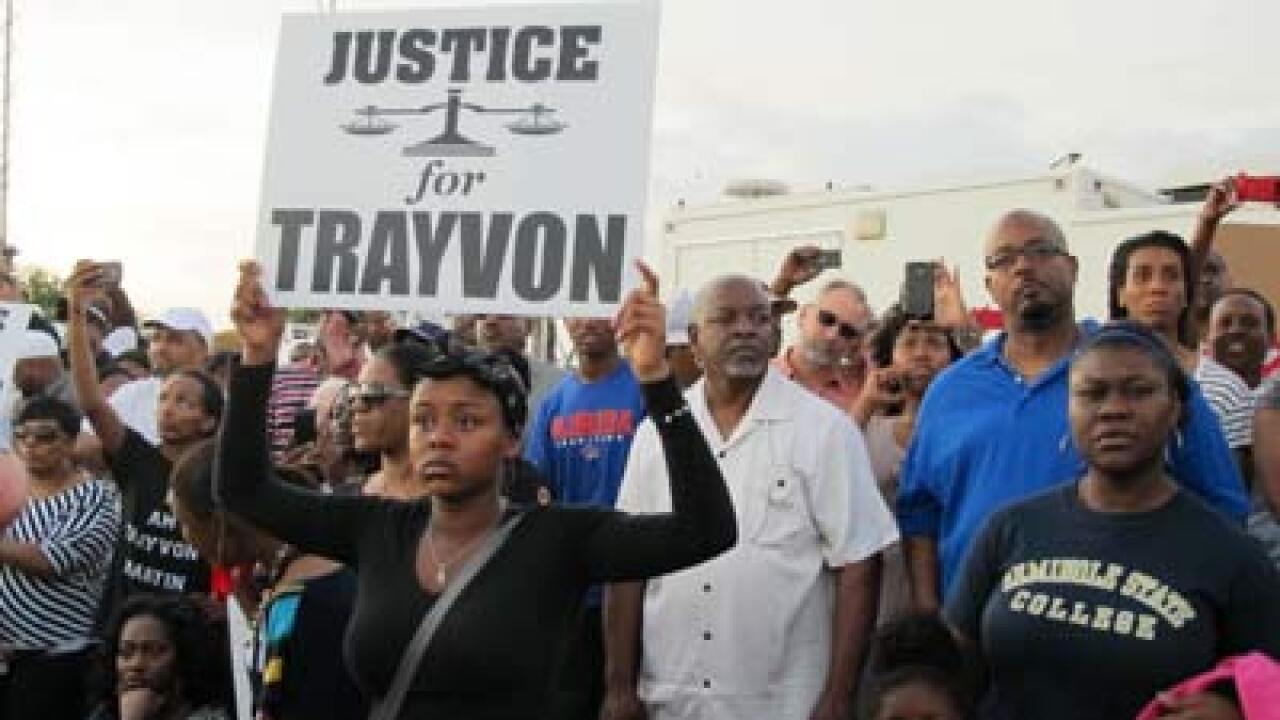 SANFORD, Florida (CNN) — Sanford Police Chief Bill Lee announced Thursday he is stepping down “temporarily” as head of the department, which has been criticized for its handling of the fatal shooting last month of 17-year-old Trayvon Martin by a neighborhood watch volunteer.

“I am aware that my role as a leader of this agency has become a distraction from the investigation,” he told reporters. “It is apparent that my involvement in this matter is overshadowing the process. Therefore, I have come to the decision that I must temporarily remove myself from the position.”

He added, “I do this in the hopes of restoring some semblance of calm to the city, which has been in turmoil for several weeks.”

The gesture did not mollify Martin’s parents. “I feel that we need an arrest,” his mother, Sybrina Fulton, told supporters at a rally in Sanford, referring to George Zimmerman, the watch leader who has told police he shot Martin in self defense.

“The temporary step-down of Bill Lee is nothing,” Tracy Martin, Trayvon’s father, told the rally. “We want an arrest, we want a conviction, and we want a sentence for the murder of our son.”

The Rev. Al Sharpton was more strident: “We did not come here for a temporary leave of absence,” he said. “We came for permanent justice — arrest Zimmerman now!”

Lee’s decision came a day after the city commission voted 3-2 in favor of a nonbinding measure of no confidence.

City Manager Norton Bonaparte said Thursday that he would like an independent review of police action in the wake of the shooting.

Also Thursday, Gov. Rick Scott announced that he was appointing Angela B. Corey of the 4th Judicial Circuit as state attorney in the investigation, replacing Norman Wolfinger.

Lee’s decision came as Justice Department officials met Thursday with the parents of Martin, who was unarmed when he was shot and killed in an Orlando suburb.

“During the course of this meeting, we listened carefully to the concerns of the family and their representatives,” the Justice Department said in a statement. “Earlier this week, the Department of Justice announced the opening of a parallel investigation into the death of Trayvon Martin. That matter remains open at this time.”

Assistant Attorney General for the Civil Rights Division Thomas Perez told reporters in a conference call that the investigation is being carried out in coordination with the U.S. Attorney’s Office in the Middle District of Florida.

“We’re in the fact-gathering stage and we’re working collaboratively with the state’s attorney’s office and the local authorities to figure out what happened,” he said. “We don’t know what the facts are yet. We’re gathering the facts and as we gather the facts we will then determine whether or not the facts support a prosecution under the civil rights laws that we enforce.”

The case has riveted the nation. Martin’s family asserts that race was a factor in the black teenager’s death.

Martin was shot February 26 while walking to the house of his father’s fiancee after a trip to a convenience store.

Zimmerman has not been arrested. A police report describes him as white; his family says he is Hispanic and that he has wrongly been described as a racist.

The uproar over Martin’s death has reverberated nationwide with demands for Zimmerman’s arrest and scrutiny of police actions.

More than 1.3 million people have signed a petition on Change.org urging prosecution for Zimmerman. Thursday morning, the petition was getting 1,000 signatures per minute, said Noland Chambliss, communications manager for Change.org.

CNN has made numerous attempts to contact Zimmerman but has been unsuccessful.

Sharpton was planned to lead a rally Thursday night at a church in Sanford, a racially mixed city of about 50,000 people just north of Orlando.

On Thursday night, Sharpton called for action by authorities. “We want to see Zimmerman in court with handcuffs behind his back charged with the death of this young man Trayvan Martin,” he told thousands of demonstrators who had gathered in Sanford’s Fort Mellon Park.

“We are here tonight to fight for all our children,” said NAACP’s Jealous. “This isn’t an issue about black and white, this is an issue about right and wrong.”

Zimmerman, who was patrolling the neighborhood, saw Martin walking in his gated community. He called 911 and reported what he described as a suspicious person. Moments later, several neighbors called the emergency number to report a commotion outside.

The 911 tapes of neighbors’ calls to emergency dispatchers picked up cries for help followed by the sound of a gunshot.

“The time that we heard the whining and then the gunshot, we did not hear any wrestling, no punching, no fighting, nothing to make it sound like there was a fight,” said Mary Cutcher, one of the callers.

Another caller, Selma Mora Lamilla, said she did not hear any altercation, but the teen cried and “whimpered” before the shooting.

Martin’s girlfriend was on the phone with him during the incident and can help prove he was killed “in cold blood,” said Benjamin Crump, the Martin family’s attorney.

The girl connects the dots and “completely blows Zimmerman’s absurd self-defense claim out of the water,” Crump said.

Shortly before he was shot, the teen told his girlfriend that someone was following him and he was trying to get away, according to the lawyer. The girl, who did not want to be identified, said that during the call, she heard Martin ask why the person was following him.

She got the impression there was an altercation in which his cell phone earpiece fell out after he was pushed, and the connection went dead, Crump said. She did not hear gunfire, he said.

In his application for the course, Zimmerman wrote: “I hold law enforcement officers in the highest regard and I hope to one day become one.”

Zimmerman’s father, Robert, told a Florida newspaper that the 28-year-old had moved from the area after receiving death threats.

He was a student at Seminole State College, but the college said Thursday that it had “taken the unusual but necessary step this week to withdraw” Zimmerman from enrollment. It cited the high-profile nature of the controversy and said the decision was based on concern for the safety of Zimmerman and the students on campus.

Zimmerman’s family has denied that race played a role, saying he has many minority relatives and friends.

“The portrayal of George Zimmerman in the media, as well as the series of events that led to the tragic shooting, are false and extremely misleading,” his father wrote in a letter published in the Orlando Sentinel. “Unfortunately, some individuals and organizations have used this tragedy to further their own causes and agendas.”

“George is a Spanish-speaking minority with many black family members and friends,” Robert Zimmerman wrote. “He would be the last to discriminate for any reason whatsoever.”

Heated debate has erupted over whether Zimmerman used a racial slur during the 911 call, a recording of which was released this week.

“We didn’t hear it. However, I am not sure what was said,” Sgt. David Morgenstern of the Sanford Police Department said.

“I have listened to the tapes, and I have not heard them use a racial slur,” concurred City Manager Bonaparte.

A top CNN audio engineer enhanced the sound of the 911 call, and several members of CNN’s editorial staff repeatedly reviewed the tape but could reach no consensus on whether Zimmerman used a racial slur.

Whether Zimmerman used such language before shooting Martin is key, according to CNN Senior Legal Analyst Jeffrey Toobin.

“It’s extremely, extremely significant because the federal government is not allowed to prosecute just your ordinary, everyday murder,” he said. “Two people fighting on the street is not a federal crime. However, if one person shoots another based on racial hostility, racial animus, that does become a federal crime.”

Toobin said that if “very shortly before” the shooting, “Zimmerman used this racial epithet to refer to the person he openly shot, that very much puts it within the FBI’s and the Justice Department’s ambit of a case that they could prosecute.”

Police say they have not charged Zimmerman because they have no evidence to contradict his story that he shot in self-defense.

Florida’s deadly force law, also called “stand your ground,” allows people to meet “force with force” if they believe there is danger of serious harm to themselves or someone else.

The shooting has renewed a debate over a controversial state law and sparked calls for a review. Gov. Scott announced Thursday he will do just that.

“After listening to many concerned citizens in recent days, I will call for a Task Force on Citizen Safety and Protection to investigate how to make sure a tragedy such as this does not occur in the future, while at the same time, protecting the fundamental rights of all of our citizens — especially the right to feel protected and safe in our state,” Scott said in a statement.

The task force will be led by Lt. Gov. Jennifer Carroll. The Rev. R. B. Holmes, Jr., pastor of the Bethel Missionary Baptist Church in Tallahassee, will serve as vice-chair.