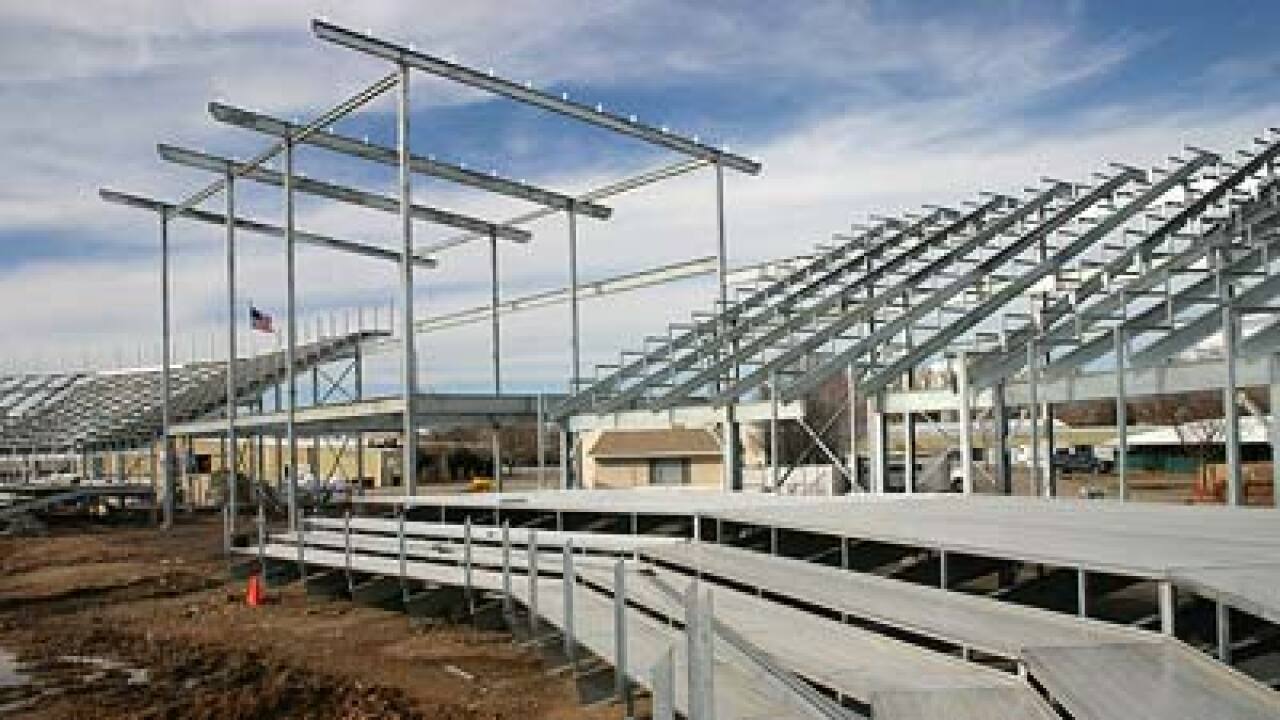 The following is a press release from Utah County.

Spanish Fork – The metal framework of the new rodeo arena under construction at the Spanish Fork Fairgrounds is complete, and crews are now beginning the installation of seating and other aspects of the $5 million facility.

A joint project funded by Spanish Fork City, Utah County and an anonymous donor, the arena is shaping up to be unlike any other in the country, said Lewis Painter, a sales representative with Great Western Park and Playground, the firm constructing the arena. The new facility replaces the old rodeo arena located at the Spanish Fork Fairgrounds, 475 S. Main.

“In the world of rodeo, this is going to be first class all the way,” Painter said. “There’s not going to be another facility that offers a spectator experience like the Spanish Fork Rodeo.”

A rendering of how the rodeo arena will look when complete.

Most rodeo arenas are built in stages, with one section at a time completed, Painter said; building one as a complete package is unusual. The Spanish Fork arena has been designed with audience flow throughout the facility as a top priority. Also, a design element placing seating above the main concourse – and therefore above those walking around the arena – means no seating areas will have an obstructed view.

“I just don’t think there’s a bad seat in the house,” said Steven Money, special events coordinator for Spanish Fork City and chairman of Spanish Fork’s Fiesta Days Rodeo for the past 28 years.

Mild winter weather has aided construction efforts, with the project currently about three weeks ahead of schedule. Completion of the stadium is expected in late April or early May, while landscaping and other finishing touches will take longer to complete.

Spanish Fork City and Utah County each contributed approximately $1 million to the project and an anonymous donor contributed $3 million. The new arena will serve as home to the annual Spanish Fork Fiesta Days Rodeo as well as a venue for events held during the Utah County Fair, which is conducted each summer at the Spanish Fork Fairgrounds.

Utah County Commissioner Larry Ellertson said the county is pleased that such a high quality venue will soon be available to local residents. “We believe this new arena will become an incredible asset to the Utah County Fair,” he said.

The performance area of the new arena is the same size as the old arena, but seating capacity has been increased from 6,370 to 8,400. This is significant considering that the last 21 performances of the Fiesta Days Rodeo have sold out, Money said.

Box seating – which provides chairs, rather than bleachers, that can be purchased as a group – has also seen a tremendous increase, from 32 boxes to 112. The boxes fill the first four rows around nearly the entire stadium, placing these audience members right next to the action. Money said demand for boxes has been high in the past, with some people spending years on a waiting list to obtain one.

Other improvements audiences will enjoy in the new stadium include:

“This is a new design and it’s just going to be incredible,” Money said.