Officials say the fire sparked at a home near 3341 West Florlita Ave. (4030 South) in West Valley City at around 2:45 p.m. and spread to a second home. Fire officials say high winds contributed to the spread of the fire from the first home to the carport of the second home.

The American Red Cross Utah Region says at least 6 adults and 6 children have been displaced by the fire. No one was injured.

"Both families were home. The folks who lived on the west side noticed the fire and notified their neighbor next door that the fire was working and everyone got out safely," said West Valley City Fire Marshall Bob Fitzgerald.

Fire crews were able to put the fire out quickly once they arrived. The cause of the fire is still under investigation, but crews say it may have been a ruptured gas line. 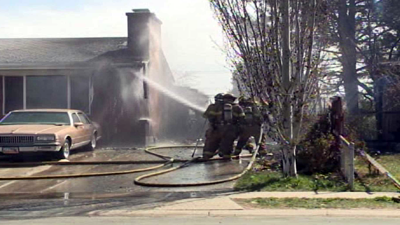