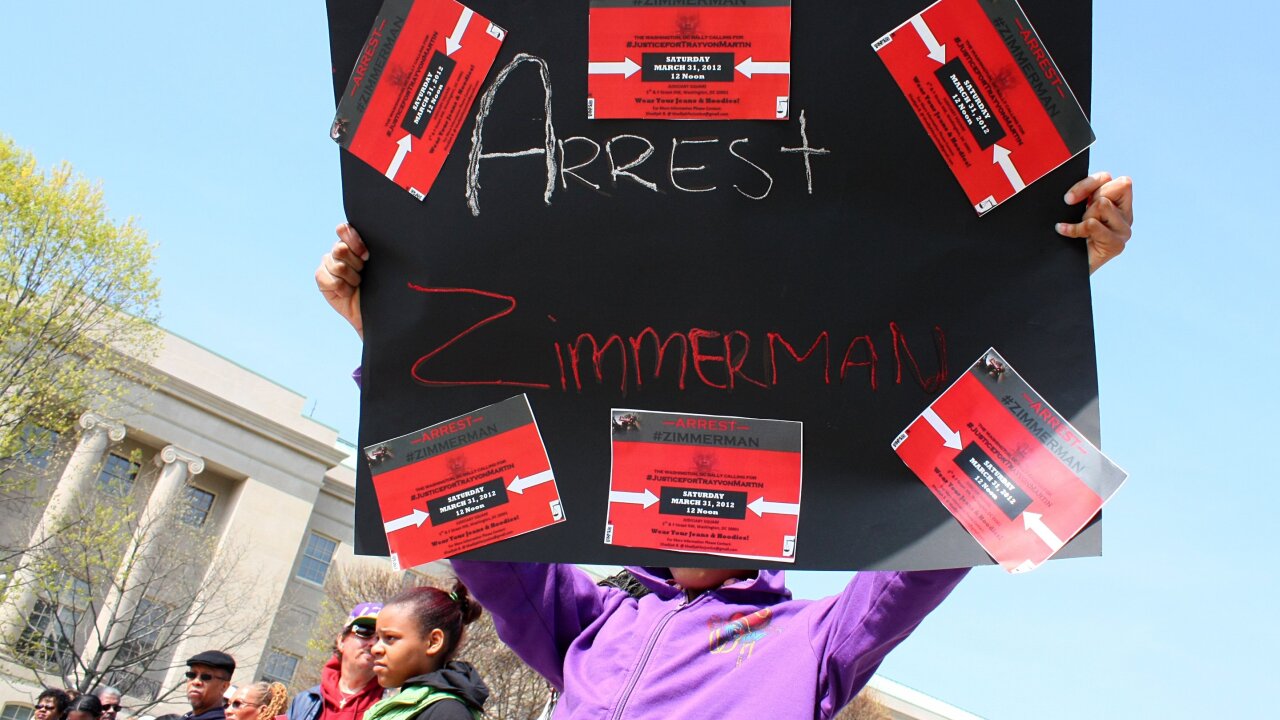 Demonstrators hold a “Justice for Trayvon Martin” rally in Washington, D.C.’s Judiciary Square on Saturday, March 31, 2012. In addition to showing support for Trayvon Martin’s family, the organizer says the rally will highlight the importance of getting out the vote so to bring change to the Stand Your Ground laws.

(CNN) — Two experts who analyzed a 911 call made during the confrontation that ended in Florida teenager Trayvon Martin’s death said they believe the screams heard in the background are not those of shooter George Zimmerman.

Zimmerman, 28, has claimed self-defense in shooting Martin on February 26. He said the 17-year-old accosted him after he called police to report Martin as a suspicious person walking around his neighborhood.

But the analysis poses some questions, legal analysts say, including whether it would be ruled admissible in court if charges are filed and the case goes to trial.

Audio experts Tom Owen and Ed Primeau analyzed the recordings for the Orlando Sentinel, and both said they believed it was not Zimmerman screaming.

“There’s a huge chance that this is not Zimmerman’s voice,” said Primeau, a longtime audio engineer who is listed as an expert in recorded evidence by the American College of Forensic Examiners International. “As a matter of fact, after 28 years of doing this, I would put my reputation on the line and say this is not George Zimmerman screaming.”

But is the analysis definitive enough for use in court? David Faigman, a professor of law at the University of California-Hastings and an expert on the admissibility of scientific evidence, said courts and the overall scientific community have mixed opinions about the reliability of such “voiceprint” analysis.

And CNN and HLN legal analysts Beth Karas and Sunny Hostin raised questions about what the public should consider regarding the conclusions reached.

Hostin says there are several questions and variables that must be considered, including the fact that the tests did not analyze similar speech. That is, the analysis was based on screams heard from a distance in a 911 call, compared with a direct phone conversation Zimmerman had with a 911 operator.

“Ideally, you want (Zimmerman or Martin’s) voice saying the same exact thing, screaming ‘help,’ in order to analyze it,” she said.

Would these tests even be admissible in court and considered evidence?

“It really depends on the individual judge,” Hostin said. “In Florida, they are going to conduct a Frye test, the legal test, which asks if the science is generally accepted in the community.”

Karas questioned whether the test stood up to the voice comparison standards of the American Board of Recorded Evidence, of which Owen is chairman emeritus.

The standards indicate that when analyzing speech, there should be a minimum of at least 10 words to be compared with each other in order to say you can have a “possible elimination” conclusion. But in this case, the cries for help don’t have nearly that number of words.

Owen said the published American Board of Recorded Evidence standards only partially apply to the kind of test he conducted.

“These standards apply to the older aural-spectrographic analysis and software,” Owen said. “This only partially applies to the biometric software.”

Both Karas and Hostin urged caution when it came to coming to a sure conclusion on the findings made by Primeau and Owen.

“I do think we need to take a step back, as with most of the facts in this case, and look at it the way the court would,” Hostin said. “And that is by asking if the circumstances of how, and if, the test was done, OK, and wait to determine whether it’s reliable.”