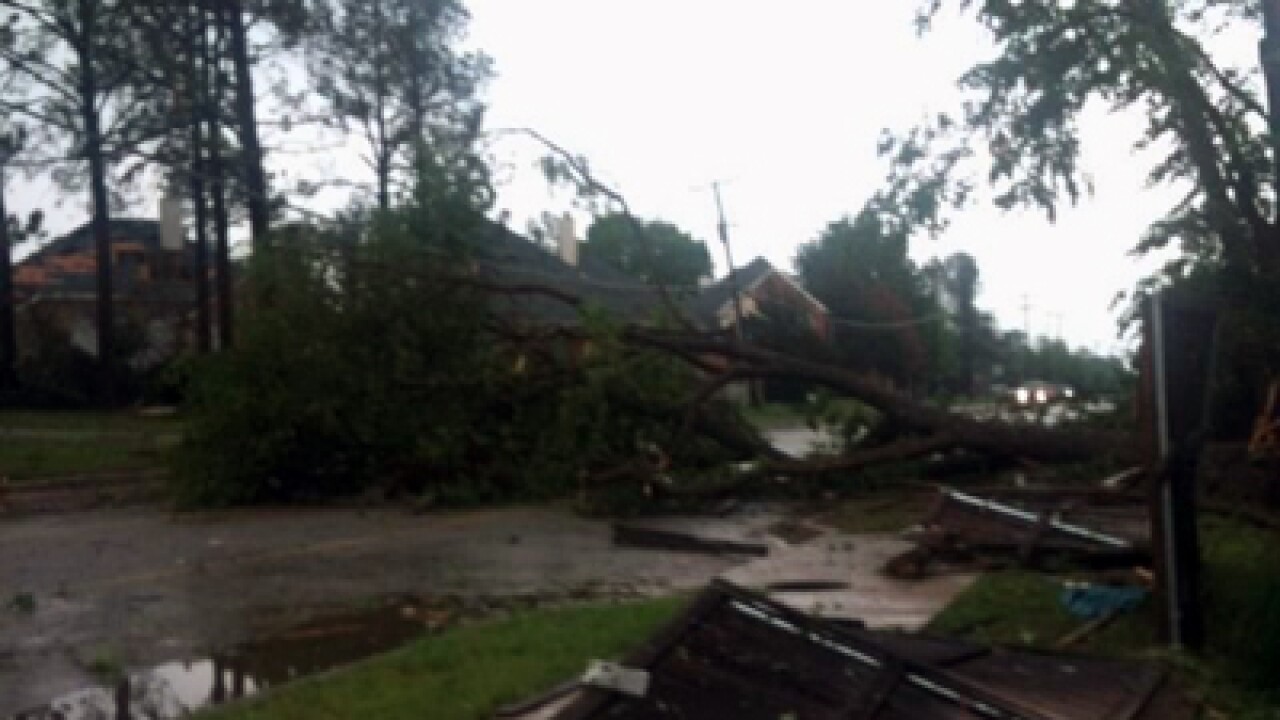 (CNN) --Tornadoes ripped through the Dallas-Fort Worth area Tuesday, tossing tractor-trailers like toys and causing widespread damage to homes and other structures.

One tornado was spotted on the ground five miles east of downtown Dallas, the National Weather Service said. All flights at Dallas-Fort Worth International Airport were grounded and passengers and airport employees were moved into shelters as the storm system spawned multiple funnel clouds. Flights at Dallas Love Field airport were also grounded.

Southwest Airlines has canceled more than 40 flights at Dallas Love Field in Texas in the aftermath of tornadoes in the area Tuesday afternoon.

"We are still in a temporary ground stop at Love Field," airline spokesman Paul Flaningan said. "So far we've canceled 21 arrivals and 25 departures."

American Airlines canceled all flights through Tuesday evening at Dallas-Fort Worth International Airport because of weather and damage in the area. American said in a statement that 68 aircraft on the ground will have to be inspected for hail damage.

"There may be storms behind the storms, making damage in places that already have damage and that now is happening for Arlington, Texas," said CNN meteorologist Chad Myers.

Severe damage was reported there and the mayor of the city signed a disaster declaration to help cope with the destruction.

"It's extensive damage," said Tiara Richard, a spokeswoman for Arlington police. No major injuries have been reported so far, but impacted areas were still being searched for people who may be trapped, she said.

A large water main broke and several people were injured, she said, though she could not immediately confirm how many. The city's police chief, meanwhile, said there have been no reports of deaths or injuries thus far. A community center was opened to residents displaced by the storm.

Dallas County Sheriff Lupe Valdez told CNN that the area was hit by "a series of tornadoes" that inflicted heavy damage on some of the southern suburbs, including Lancaster.

"Our officers are going to several locations right now," Valdez said. There were no immediate reports of serious injuries, but she urged people to remain sheltered as another line of storms neared. And she said deputies were en route to some of the hardest-hit areas to prevent looting, amid reports "that some of that has already started."

"We have our hands full. There are already a lot of situations where we have to go out and help," she said.

Video from CNN affiliate WFAA broadcast striking footage of the scene, showing tractor trailers being lifted and tossed through the air like matchsticks. Ominous clouds filled the skies, making it as dark as night. The network showed roofs of homes ripped off and trailers turned on their sides.

The most dramatic images came from a freight truck depot on the south side of Dallas, where one twister flung semi-trailers high in the air and hundreds of feet from their parking spots.

The lot was owned by Wisconsin-based Schneider National Trucking Company. Company spokeswoman Janet Bonkowski told CNN that there were no injuries at the facility and no damage to the building, "but significant damage to the equipment that was in our yard."

About 65 people work at the site, and about 300 truckers pass in and out every day, she said.

A tornado watch remained in effect for much of north-central Texas through Tuesday night.

The weather service urged people in the area to move to a bathroom, closet or hallway on the lowest floor of their buildings and take cover.