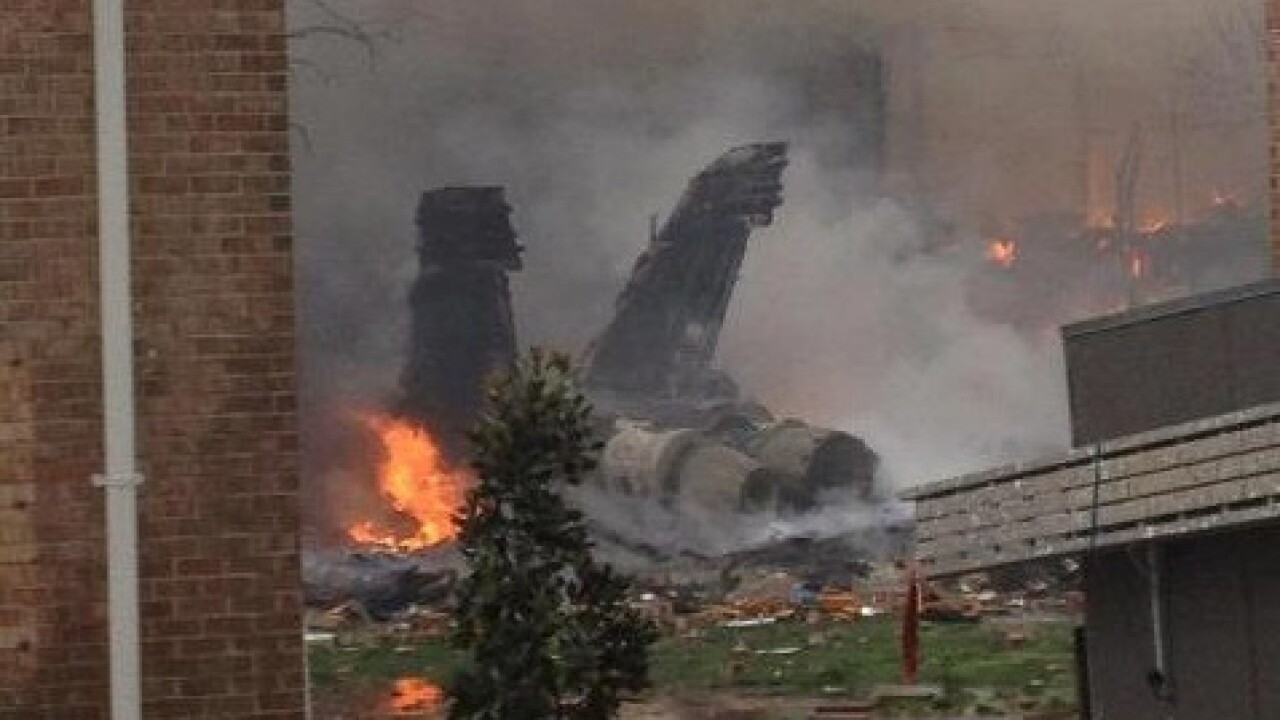 (CNN) -- A Navy fighter jet experienced a "catastrophic mechanical malfunction" during takeoff Friday over the military community of Virginia Beach, Virginia, and rained a stench of jet fuel shortly before crashing into apartment buildings, according to residents and Navy officials.

The jet carried a student pilot in the front seat and an experienced instructor behind him, and the dumping of jet fuel was "one of the indications that there was a mechanical malfunction," Navy Capt. Mark Weisgerber told reporters.

The malfunction is being investigated, he said.

The two pilots, a Virginia Beach police officer, an EMS volunteer and three other people were treated at Sentara Virginia Beach General Hospital. One of the pilots was admitted, while the other six patients were released, the hospital's website said.

Both pilots, who live in Virginia Beach, are "doing well and they suffered minor injuries," Weisgerber said.

As of Friday night, three people from one of five apartment buildings heavily damaged in the crash were unaccounted for, down from 30, Virginia Beach Fire Department Battalion Chief Tim Riley said.

No one has been reported missing to authorities, but rescue crews are using a checklist of all occupants in the five buildings in an effort to account for all residents, Riley said.

Rescue crews did an initial search of the five buildings, and as of Friday night, completed 95% of a secondary search, Riley said.

"If there is anybody there, chances of survivability would be low," Riley told reporters, referring to any survivors in the five buildings.

No deaths were reported as of Friday night, Riley said.

The crash and explosion ruptured the easy mood of spring break and the unfolding Easter and Passover holidays, and the two-seater F/A-18 jet landed eerily upright in flames in a courtyard surrounded by the five apartment buildings that were suddenly set afire, according to residents and authorities.

The two crew members ejected safely, the Navy said. Resident Pat Kavanaugh told CNN affiliate WTKR that he and others found one of them still strapped to his seat with cuts to his face. Kavanaugh said he was on his couch when he heard a loud boom and was startled to see a parachute hanging from the building.

In shock, the pilot apologized for his jet crashing into the apartment complex, and residents pulled him safely away from the fiery crash zone, said Kavanaugh, a retired rescue worker.

One ejection seat shell ripped through an oak tree and crashed into a condo fence, and the other seat shell landed next door, suggesting that the two Navy pilots ejected at a low altitude, another resident, Keith Gutkowski, told CNN.

Once the five apartment buildings were doused with water and the courtyard was coated with a snowy foam, rescue crews began a grim, detailed search through the charred hulks to look for any residents injured or killed, Riley said.

Eyewitnesses and residents described their community -- so accustomed to military planes taking off near their homes -- suddenly taking a surreal turn for the worse when the jet fell out of the sky and spewed its fuel, a possible maneuver to minimize the inevitable fire upon crashing.

Virginia Beach EMS Division Chief Bruce Nedelka said the carnage could have been much worse, had the plane's pilot not dumped fuel shortly before crashing.

"The pilot in the jet did an absolutely tremendous job," he said. "If that had not been done, the impact and the subsequent fire damage with all that extra fuel would have been intense. What he did was wonderful."

Witness Amy Miller, a resident who was getting ready to work at a nearby cleaners, told CNN she saw the cockpit ejection and flames under the right wing as the jet descended. The aircraft appeared tilted toward the right as it went down, she said.

As the crash site belched black smoke, residents ran toward the apartments but then ran away when subsequent explosions frightened them, eyewitnesses said.

"We're used to low-flying jets around here," said George Pilkington, who saw the jet fly over his truck.

"Because it was releasing so much fuel, I knew something was wrong," he added. "It sounded like the engine was straining or stressing.

"I don't know if there was a better or worse place to hit because there are so many apartments around the area," he told CNN. "If it was a half-mile to the west, it could have been a creek or marsh."

Pilkington said the plane was flying low, with its nose up and tail down.

"That it didn't cause more damage to the apartment buildings was a blessing," he said.

The jet was from a training squadron at Naval Air Station Oceana, the Navy and Federal Aviation Administration said.

Resident Gutkowski said the plane crash site was 75 yards from his home, and his wife saw the plane "almost fall out of the sky."

"What they're saying about ejecting very late is definitely true," Gutkowski said about reports that the pilots apparently ejected at a low altitude.

"Both ejection seats are right here, and the parachute is right by the crash site," Gutkowski told CNN.

Another witness, Zack Zapatero, said the plane crashed into a building occupied by senior citizens. He took photos of the scene.

"There's these large fireballs coming up," Zapatero said. "I was told there was a bunch of senior citizens that live in that building, which worries me a lot.

"Buildings were starting to collapse," he said of the wreckage scene.

"Through the smoke, you could see the end of the plane sitting in the courtyard," Zapatero said.

Colby Smith told CNN affiliate WVEX that he was in his bathroom when he felt his "whole house shaking." Then he looked out his bedroom window and "saw nothing but red, just red and orange flashing. And just a crackling noise. I was like, 'What is that?' " he said.

Smith said he ran outside, saw a friend and eventually spotted a pilot who was "laying there" and bleeding. He said he and several others then picked up the pilot and carried him to safety. It wasn't immediately clear Friday whether the pilot was the same one that Kavanaugh assisted.