Obama dishes it out at annual dinner 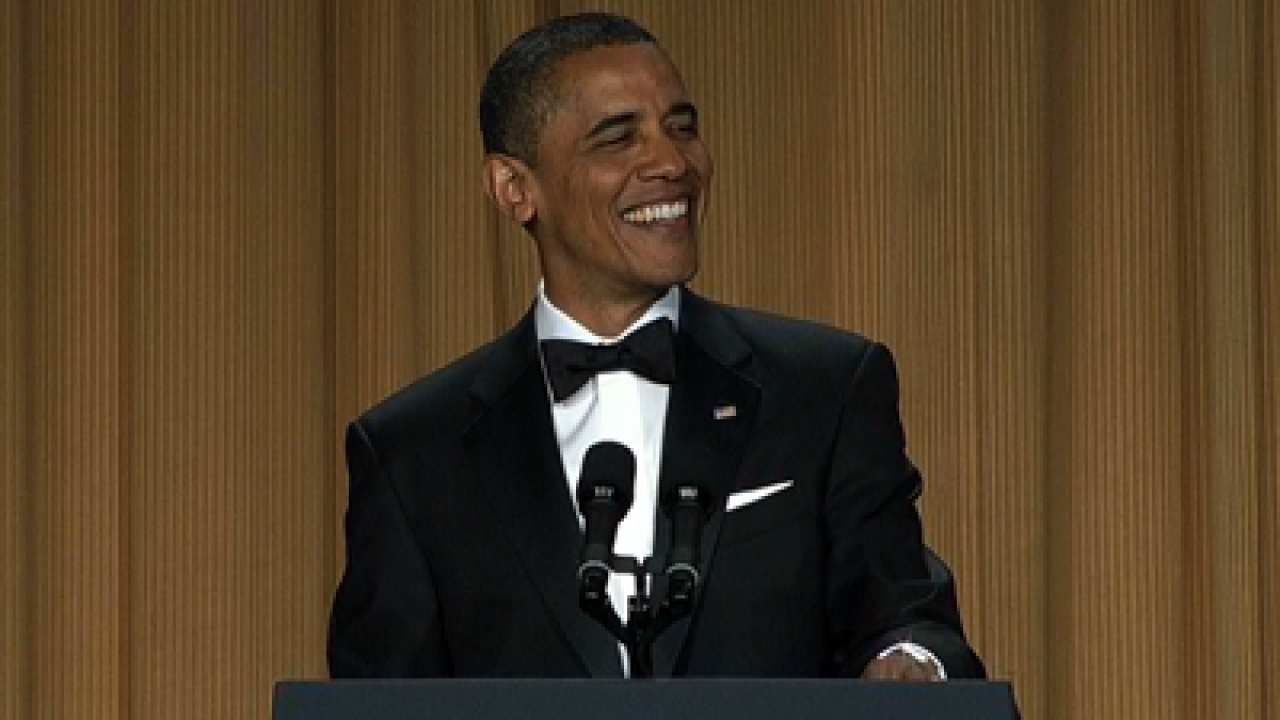 WASHINGTON (CNN) — President Barack Obama made light of the serious — a Secret Service scandal and lavish spending at a government conference — and the inconsequential — the graying of his hair — at the annual White House Correspondents’ Association Dinner on Saturday night.

And he even made time for business tycoon Donald Trump, whom Obama kidded at last year’s dinner about pushing the president to release his long-form birth certificate.

“We gather during a historic anniversary. This weekend last year, we finally delivered justice to one of the world’s most notorious individuals,” Obama said to a packed ballroom at the Washington Hilton.

A photo of Trump was shown, rather than that of slain al Qaeda leader Osama bin Laden.

Obama then went back even further in time.

“Four years ago, I was in a brutal primary battle with Hillary Clinton,” Obama said. “Four years later, she won’t stop drunk texting me from Cartagena,” a reference to the city where Secret Service agents allegedly consorted with prostitutes.

He then pointed out photos of his hair four years ago, and in 2012, showing it had grayed considerably.

“Four years from now I will look like this,” he said to laughs as a photo of actor Morgan Freeman was shown to the audience of more than 2,500.

Journalists and news organizations were well-represented at the affair and they brought famous faces in tow.

The president, speaking before comedian Jimmy Kimmel, made light of a General Services Adminstration conference in Las Vegas that cost more than $800,000.

“Look at this party. We have men in tuxes, women in gowns, fine wine, first-class entertainment. I was relieved to hear it was not a GSA conference,” Obama quipped.

He even chided Kimmel, star of ABC’s “Jimmy Kimmel Live!”

“Jimmy got his start on the ‘Man Show.’ In Washington, that is what we call a congressional hearing on contraception.”

Kimmel, who took the stage following the president’s monologue, hit back.

“Remember when the country rallied around you in the hopes of a better tomorrow?” Kimmel asked. “That was hilarious.”

Nobody in the room was safe from Kimmel’s barbs, which he fired at politicians, journalists, celebrities and corporate executives in attendance.

The dinner was Obama’s fourth as president. It has been a ritual in Washington since 1920, when it was first held to boost communication between the press and the president, according to the association’s website. It was open only to men until 1962, when President John F. Kennedy said he would not attend unless women were invited.

Speaking of women, first ladies have been known to get in their own digs.

In 2005, Laura Bush said friends went out one night to see male strippers after Bush, “Mr. Excitement,” was typically fast asleep at 9 p.m.

First lady Hillary Clinton was featured in a video clip shown at the 2000 dinner. Seated in a limousine, she told the camera, “I wish I could be here more, but I really think Bill has everything under control.”

The president ran out to the White House driveway, yelling after the departing car, shouting, “Wait! Wait! You forgot your lunch!”

While the dinner is notorious for its bawdy humor, the president took a moment to remember the sacrifices of journalists Anthony Shadid and Marie Colvin, who both died while covering the conflict in Syria.