Protest in Ogden in support of accused police shooter 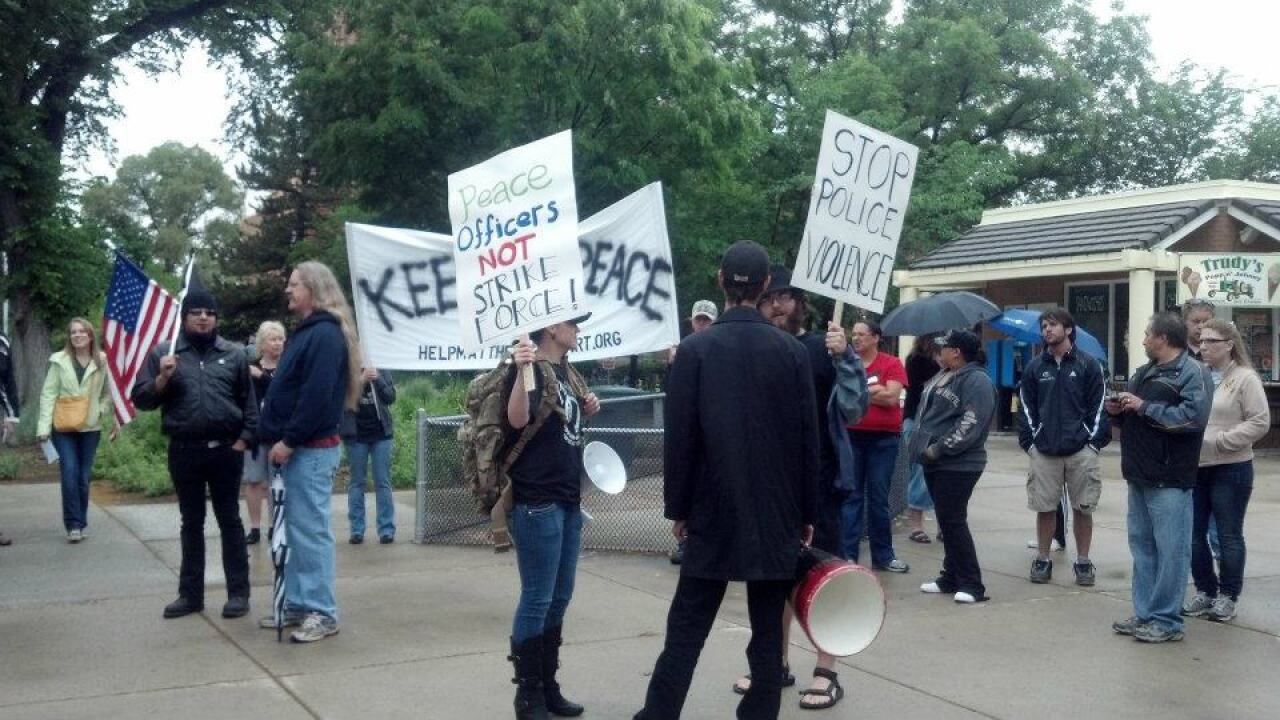 OGDEN -- About 30 people marched through the downtown area in support of accused cop-killer Matthew David Stewart, who's charged in connection with the killing of a police officer and wounding five others.

"No justice! No peace! No violent police!" the group chanted as they made their way down Washington Boulevard to the Weber County Attorney's Office.

The group decried what they claim are "violent tactics" by police in the war on drugs.

Stewart is accused of killing Agent Jared Francom and wounding five other officers as they served a drug-related search warrant at his home earlier this year. Stewart's family has claimed he believed he was being robbed, not that police were in his home.

"The only thing that we really want to do is to get people to understand that there are two sides to every story and regardless of what the public has been told, my (brother-in-law) is a kind person and would not have meant for this to happen," Erna Stewart told FOX 13.

Stewart and his supporters have gotten vocal about the case in recent weeks, criticizing police tactics and the overall "war on drugs." Some demonstrators carried signs supporting the legalization of marijuana, what Stewart is accused of growing -- and what brought officers to his home in the first place.

"There's got to be some change in the tactics that they are allowed to use and are proud to use," demonstrator Preston Blake said.

Some demonstrators wore T-shirts emblazoned with "POW/MIA" (Stewart served in the Army. A representative of the POW/MIA Awareness Organization of Utah insisted they did not support the rally.)

Ogden police kept a close watch on the demonstrators. Kevin Burrell, the father of wounded officer Kasey Burrell, confronted the protesters and defended the police.

"The bottom line is, the police did their job! That's all there is to it and they suffered for it," he told the crowd. "They're having these rallies for a cold-blooded killer as far as I'm concerned."

Stewart remains in the Weber County Jail. He faces a preliminary hearing in July, where a judge will decide if there is enough evidence to make him stand trial on charges of aggravated murder and attempted murder. He faces the death penalty, if convicted.

A recent check of court records showed that some of the wounded officers have been subpoenaed to testify.

Recently, the Roy Police Department cleared Agent Jason VanderWarf of any wrongdoing in the shooting. In a report released under public records requests, it provided new details about the events.

"After hearing gunshots, Agent VanderWarf rushed upstairs in time to see Agent Grogen come stumbling out from a hallway with a gunshot wound to his face, spitting out blood," the report said. "Moments later he watched Agent Burrell drop to the floor from a gunshot wound."

After watching Jared Francom get shot, the report said VanderWarf was shot in the hip and fell down the stairs.

"Lying in a heap at the bottom of the stairs, he could still hear gunfire coming from upstairs," the report said. "After assessing that he was bloody but ambulatory, he ran back up the stairs only to see Agents Francom and Burrell stacked on top of one another on the floor by the back door in a futile attempt to escape. Seeing these two Agents in obvious distress he bent down to help them only to receive more gunfire in his direction."

The report said Weber County Sheriff's Sgt. Nate Hutchinson was then shot, and returned fire. VanderWarf and Agent Derek Draper then started to get the injured officers outside the home, the report said, adding that Stewart continued to shoot at them from the front door.

You can read the report here.

See photos of the rally here.