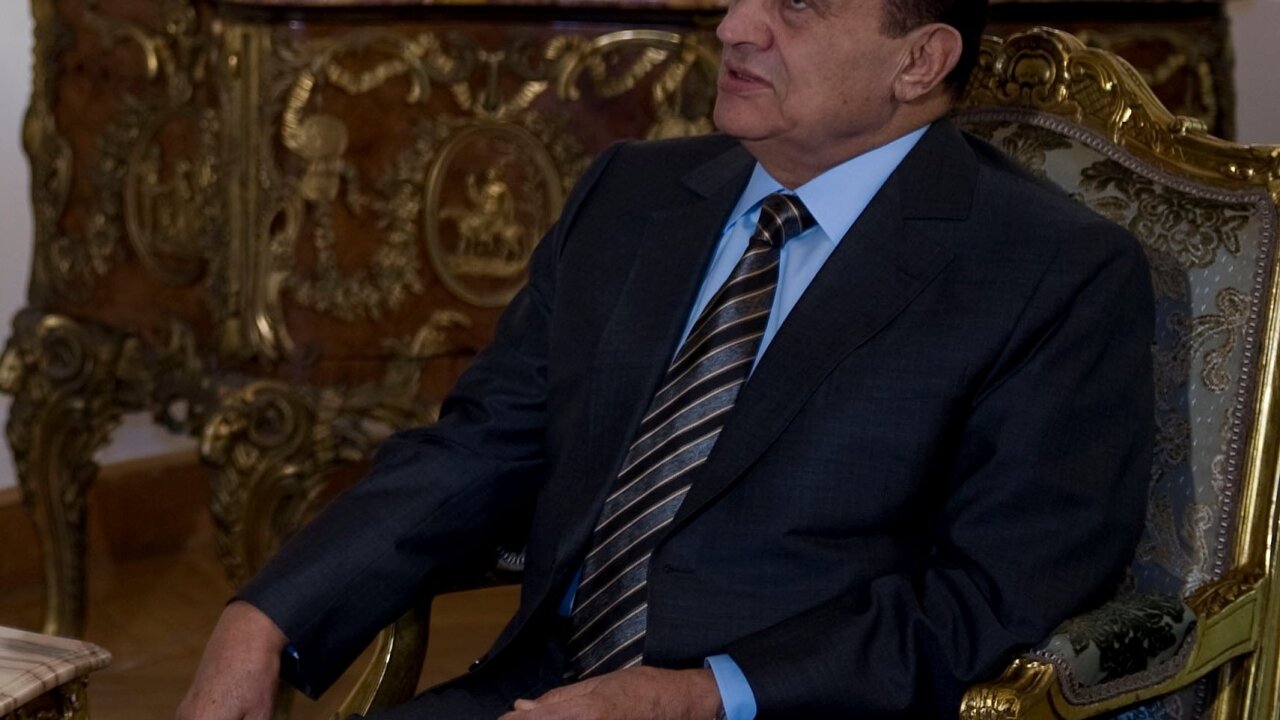 Secretary of Defense Robert M. Gates (not pictured) sits down with Egyptian President Hosni Mubarak in Cairo, Egypt, April 18, 2007. The focus of Gates’ trip was to meet with Egyptian leaders to discuss Iraq and Egypt’s roles in the Middle East.

Mubarak and former Interior Minister Habib El Adly were sentenced to life in prison for their crimes. Mubarak was immediately transferred to a prison in southern Cairo to serve his sentence, and a prosecutor said the former president, who attended court on a gurney, would be transferred to the prison hospital.

Protesters in the square, the center of last year’s protests, waved Egyptian flags as they demanded justice for those killed and injured during last year’s demonstrations. At least 61 people were injured Saturday in protests throughout Egypt, following the verdict, state TV reported.

“How is (Mubarak) imprisoned for life … but his main aides are set free?” asked AbdulMawgoud Dardery, a member of the Freedom and Justice Party, which is part of the Muslim Brotherhood, Egypt’s largest and oldest opposition group.

“That is a big insult to Egyptian will,” Dardery told CNN.

The Islamist group Muslim Brotherhood is fielding one of two candidates in this month’s presidential runoff. Mohamed Morsi is facing secularist Ahmed Shafiq, a former official in Mubarak’s regime.

Given the anger and perceived injustice at the verdict in the 10-month trial, Dardery said, the outcome will hurt Shafiq and anyone associated with the former regime.

“All of Egypt are now rallying behind Dr. Morsi,” Dardery told CNN. “We call him the candidate of the revolution because he promised the Egyptians to bring justice to those who killed their sons and daughters.”

Speaking to reporters, Morsi later echoed the belief that he is the revolution’s candidate and promised to bring those responsible for the deaths to justice.

“In the near future, if I am chosen, I will directly initiate a criminal investigation to identify evidence against those who killed revolutionists, those who caused corruption and those who robbed the nation,” he said. “I repeat, I am with the revolution and I will continue to be, even after I become president.”

About 840 people died and more than 6,000 others were injured in last year’s 18-day uprising, according to Amnesty International.

“I’m asking the help of the people who gather in Tahrir Square to get justice for my son,” pleaded one woman on the street in Cairo. “I need justice for my son. My son did not commit any crime. How come the sons of Mubarak are set free?”

The Cairo courtroom erupted in chaos Saturday after the judge convicted Mubarak, 84, and acquitted six of his aides for the killings. Mubarak was cleared of a corruption charge and two of his sons were also set free.

It appeared the entire gallery of men dressed in suits began shouting and stood on their chairs chanting that the decision wasn’t harsh enough. Fists flew and at least one man suffered a bleeding gash to his chin.

“We want honesty!” they shouted. “Revolution till victory!”

The Muslim Brotherhood called for protests in Tahrir Square and vowed to retry the acquitted aids if Morsi is elected. Shafiq’s side did not immediately comment on the outcome.

The former president’s lawyer, Fareed El Deeb, said there were many holes in the judge’s decision and that he was already preparing to appeal the Mubarak verdict.

Protesters at one point burned Shafiq campaign posters in the square. And thousands marched through downtown Cairo, calling for a law to bar Shafiq from running and carrying posters reading “Shafiq = Mubarak.”

The echoing cheers outside the police academy where the trial was held turned to angry shouts as people first heard Mubarak’s sentence, then heard that all of Mubarak’s senior advisers and his two sons were acquitted.

The sentence delivered by Judge Ahmed Refaat was the final chapter of Mubarak’s iron rule of Egypt that ended in February 2011. He said it offered people relief after living “in 30 years of dark without any hope.”

“The verdicts are insults to the Egyptian people and the judicial system. It’s a festival of innocent verdicts to El Adly’s aides who killed and tortured free citizens for years,” said Rami Shath, a member of the Egyptian Revolution Alliance.

Human Rights Watch said the verdict sends a message to Egypt’s future leaders that they are not above the law, though it said the acquittals give “a green light to future police abuse.”

Amnesty International described the verdict as “a significant step towards combating long-standing impunity in Egypt,” but it, too, said the ruling leaves many waiting for full justice.

Arab leaders: Where are they now?

David Scheffer, an American lawyer and diplomat who served as the first U.S. ambassador-at-large for war crimes issues, said the trial was significant for the Arab world even if it could have been run better.

“While I want to emphasize the problems with the trial itself, it’s also important to recognize that the Egyptian judicial system has held a leader accountable for very serious crimes that occurred during the uprising in Egypt,” Scheffer told CNN.

“In the very heart of the Arab world, where this has not occurred before in a civilian court, a leader has actually been brought to justice, a leader who has been persent in the courtroom has brought to some level of justice by a domestic court for gross human rights abuses.”

The White House had no comment on Mubarak’s sentencing, while a U.S. State Department official, not authorized to speak on the record, described it as “a decision made by the Egyptian judiciary according to the Egyptian legal process” and referred further questions to the Egyptian government.

The trial has been a spectacle few Egyptians thought they would see, with Mubarak on the gurney and locked in a defendant’s cage.

The verdict follows Friday’s expiration of a notorious emergency law that was in effect since shortly after Mubarak came to power in October 1981 and gave police sweeping powers.