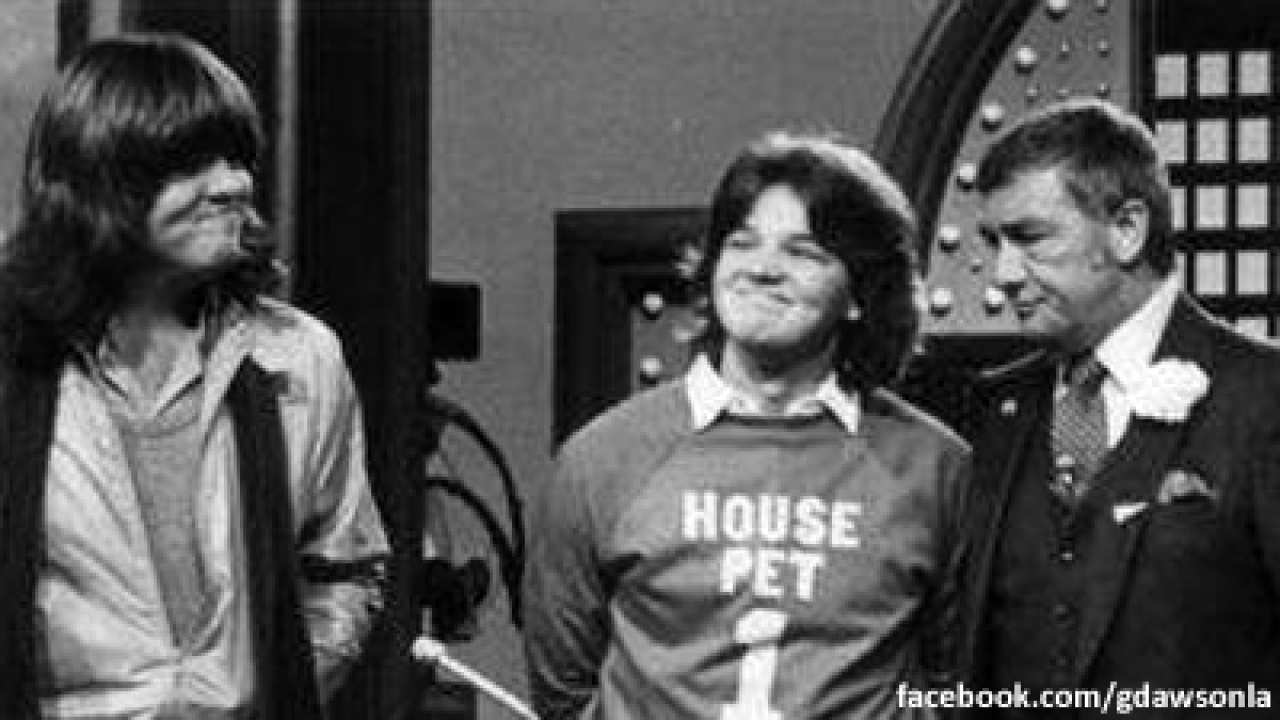 LOS ANGELES (CNN) — Richard Dawson, the longtime host of “Family Feud” known for planting kisses on female contestants, has died, his son said in a statement Sunday. He was 79.

“It is with a very heavy heart that I inform you that my father passed away this evening from complications due to esophageal cancer,” Gary Dawson said in a post on his Facebook page. “He was surrounded by his family. He was an amazing talent, a loving husband, a great dad, and a doting grandfather. He will be missed but always remembered.”

Dawson told the Archive of American Television in a 2010 interview that his trademark move started early on in the show’s run, when he saw a woman shaking as she struggled to come up with the name of a green vegetable.

“I said, ‘I’m gonna do something that my mom would do to me whenever I had a problem of any kind. … And I kissed her on the cheek, and I said, ‘That’s for luck.’ And she said, ‘Asparagus.’ … They went on to win,” he said.

Always wearing a flower on his lapel, Dawson was also known for his witty banter with the contestants. He said in the Archive of American Television interview that he always tried to be fair and encourage the players. Following an answer, Dawson would yell, “Survey says …” as the contestants and television audience waited to see whether their answer appeared on the board.

“The thing that I loved about ‘Feud,’ we froze a moment in time for these families that had never occurred before,” he said, adding the show would furnish families with videotapes of the show. “That’s magic,” he said.

Dawson was born November 20, 1932, in Gosport, Hampshire, England, as Colin Lionel Emm. When he was 14, he joined the Merchant Marines for three years before starting his career as a stand-up comedian in London — changing his name along the way.

In the early 1960s, he appeared on television shows including “Steve Allen” and “The Dick Van Dyke Show,” but it was his performance as a military prisoner in the film “King Rat” that led to his role as Cpl. Peter Newkirk, a cockney prisoner of war, on the CBS sitcom “Hogan’s Heroes,” his son said. It was that role that introduced Dawson to American audiences.

The show ran “six years … a year longer than Hitler,” Dawson once said, according to his son.

Dawson became a regular on the game shows “Match Game” and “Match Game PM,” and was hired to host his first game show, “Masquerade Party,” his son said. In 1976, however, he was hired as the host of “Family Feud.”

“At the height of its success, ‘Feud’ was both the number-one daytime show and the number-one syndicated television show, becoming one of the most popular game shows ever,” another post on Gary Dawson’s Facebook page said. The game show aired 11 times a week and also aired 20 primetime specials featuring celebrities. Its success made Dawson television’s highest-paid game show host, his son said.

Dawson said in the interview it was very important to him “that I could kiss and touch all people. To say kiss, it sounds crazy, but they’re all people and that’s how I saw them, whether I liked them or didn’t like them.”

He said he never thought twice about a contestant’s race. “When I first came here, Petula Clark was on a show with Nat King Cole and he kissed her on the cheek, and 81 stations in the South canceled him. I kissed black women daily and nightly (on “Family Feud”) for 11 years and the world didn’t come to an end, did it?”

Dawson and his first wife, British actress Diana Dors, had divorced in the late 1960s, according to his son. In the Archive of American Television interview, Dawson discussed meeting his second wife, Gretchen Johnson, when she was a contestant on “Family Feud.”

“I knew there was just something about this young lady and myself,” he said. He asked her afterward if he could call her, he said.

At one point, when Johnny Carson was considering retiring as host of “The Tonight Show,” Dawson was considered as a replacement, and hosted the show for a week, Gary Dawson said. Carson ultimately decided not to retire.

Later, Dawson appeared in the film “The Running Man” with Arnold Schwarzenegger.

“He was loved by millions of Americans as a television icon, but loved even more as a husband, a father and grandfather by his family,” Gary Dawson said. In the Archive of American Television interview, Dawson recalled Schwarzenegger as a nice person, but said he was an “awful governor.”

Dawson is survived by his two sons with Dors, Mark and Gary, along with his wife Gretchen, their daughter Shannon and four grandchildren, Gary Dawson said.

Asked in the 2010 interview what he thought of game shows today, Dawson said, “I don’t find any soul in those shows. I’m not being noble.”

He poked fun at himself, saying, “What a grouch. He’s turned into a grouch.”

On how he would like to be remembered, Dawson said, “Alive and well.” He then added, “… that I did care. Probably not as much as I should. It’s easy to duck out of things, but lots of things touch me and I try to help some people … that I was kind, and I was a nice person. You wouldn’t want to move if you sat next to me on the bus. Or maybe you would.”