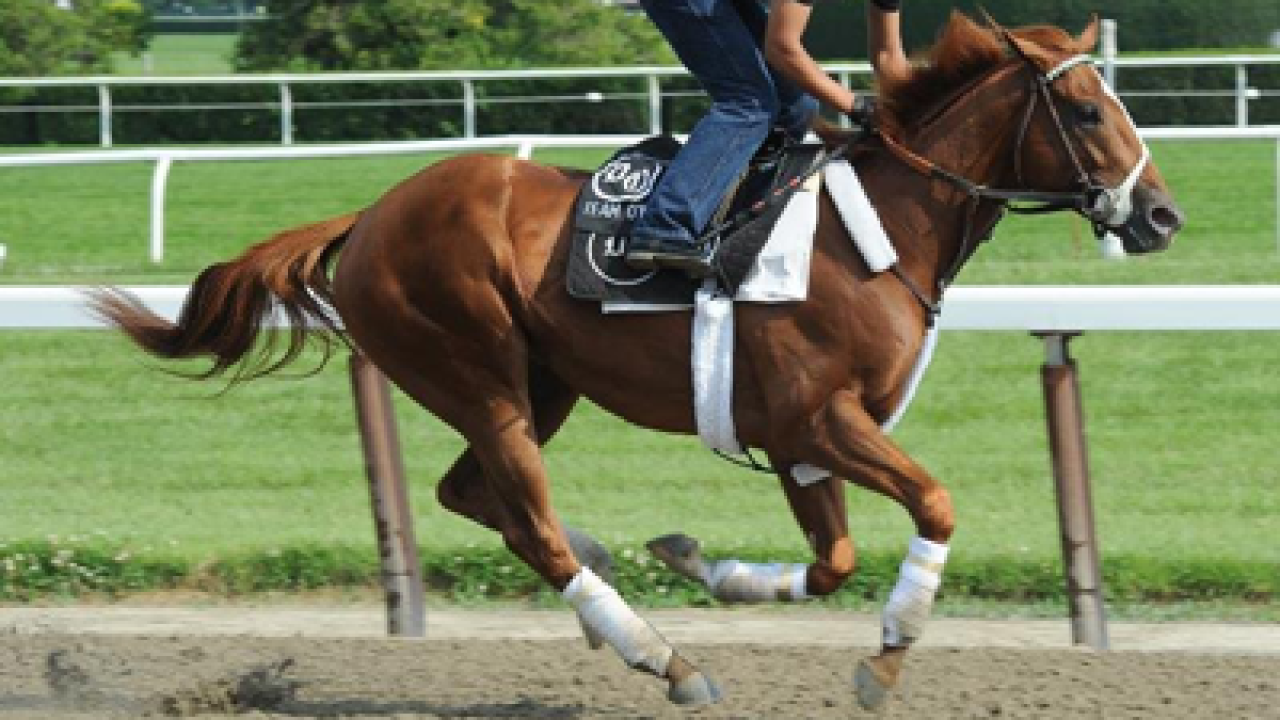 ELMONT, New York (CNN) — Union Rags roared from behind to win the 144th running of the Belmont Stakes on Saturday, one day after the winner of the first two legs of horse racing’s fabled Triple Crown dropped out due to an injury.

Paynter led for much of the race, but ended up in second after jockey John Velazquez led Union Rags on a late charge. Atigun came in third.

“I knew he would make it, and I knew (trainer) Michael (Matz) could do it with him,” the colt’s owner Phyllis Wyeth told NBC, which covered the race. “And nobody would have gotten through on the rail other than Johnny today. That was unbelievable.”

Wyeth, who owns a small horse farm about 30 miles west of Philadelphia, had sold Union Rags only to later repurchase him at auction. The horse had entered the Kentucky Derby as among the favorites, but faltered and ended up in seventh.

During Saturday’s race, Union Rags hung around in the middle of the pack before Velazquez squeezed him in along the rail, where he edged out Paynter by a head.

Union Rags did not run in the Preakness, the second leg of the Triple Crown.

I’ll Have Another had entered the New York race as the runaway favorite, having won the Kentucky Derby and the Preakness. But he dropped out after developing tendonitis, prompting his owner to subsequently announce the colt’s retirement from racing.

A day after owner J. Paul Reddam announced I’ll Have Another’s racing career was over, and minutes before the Belmont Stakes contenders broke from the gates, the injured colt was led to that race’s winner’s circle and ceremoniously retired.

“He’s had an incredible run,” trainer Doug O’Neill said Saturday. “Could we have run him? Yes. But would that have been the right move? No. I was proud of the whole team.”

I’ll Have Another jockey Mario Gutierrez, born in Mexico, described the “unbelievable journey” he has been on — rocketing from relative obscurity racing in western Canada to international fame in his first two Triple Crown contests — thanks to I’ll Have Another. The jockey expressed faith that the horse, had he been healthy, would have made history Saturday.

“A lot of people didn’t believe in him since (the) Santa Anita Derby, the Kentucky Derby, (opining that) everything was going to be a huge deal for him. And he proved them wrong,” Gutierrez told reporters Saturday. “I know if he was 100% today, he would prove everybody wrong again.”

Affirmed, in 1978, was the last horse to win the Triple Crown — the name of the triumph for horses that win the Kentucky Derby, Preakness and Belmont Stakes. Since 1990, only seven horses have won the first two legs.

The Belmont is considered to be the longest and most grueling of the three Triple Crown races. The horses run one complete lap over 1½ miles. The Derby is 1¼ miles, and the Preakness is 1 and 3/16 miles.

The Triple Crown did not acquire its name until Sir Barton won all three races in 1919. Just 11 horses have won the prestigious honor, most recently in 1978, when Affirmed grabbed the title.

Only two other Derby and Preakness winners were unable to run in the final leg of the Triple Crown: Burgoo King in 1932 and Bold Venture in 1936.