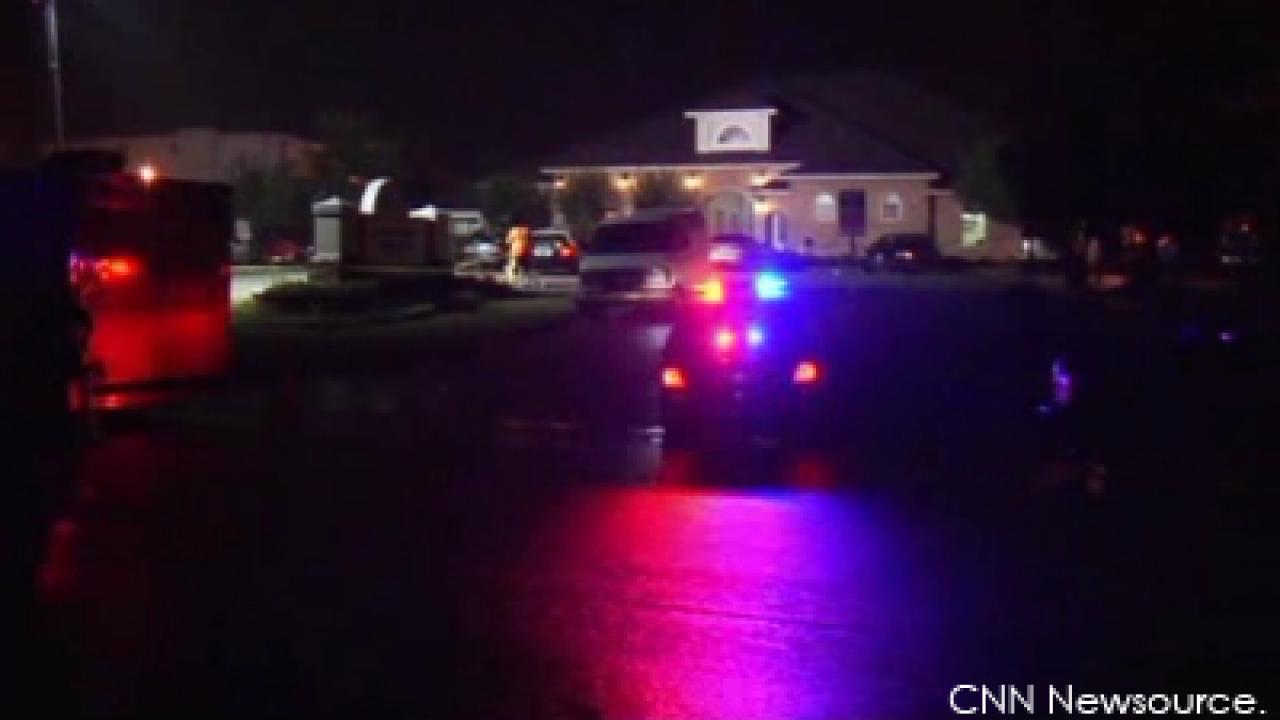 (CNN) — Three people, including two former Auburn University football players, were killed late Saturday and three others were wounded in a shooting in an off-campus apartment complex in Auburn, Alabama, police said Sunday.

A manhunt was under way in Montgomery, about 55 miles west of Auburn, for a suspect in the case, said Auburn Police Chief Tommy Dawson. He identified the suspect as Desmonte Leonard, 22, of Montgomery.

Officers received a call reporting the shooting at the University Heights apartments clubhouse about 10:03 p.m. Saturday, Dawson said. Arriving officers found Edward Christian, 20, dead at the scene. Christian, of Valdosta, Georgia, was off the football team due to an injury, Dawson said.

Mack’s injuries were not life-threatening, Dawson said, but 20-year-old John Robertson was in critical condition and undergoing surgery at the University of Alabama at Birmingham Hospital. Robertson was shot in the head, Dawson said.

A third man, 19-year-old Xavier Moss, was treated and released from East Alabama Medical Center. Both Moss and Robertson are from Roanoke, Alabama, authorities said.

Police have a motive in the shooting, but Dawson would not release it, saying “that’s for the courtroom, later on.”

Authorities believe gunfire erupted during a fight at a party, he said. Leonard and two other men were thought to have fled the scene in a white Chevrolet Caprice. Police later found the car abandoned in an adjacent county, Dawson said, and it was being processed.

The men believed to have fled with Leonard were being sought for questioning Sunday, Dawson said, but did not release their identities, saying only that “it would probably be in their best interest to come forward.”

Arrest warrants have been issued for Leonard on three counts of capital murder, Dawson said. He is considered armed and dangerous, and U.S. Marshals were assisting in the search for him, along with Montgomery police.

“It’s sickening that these young lives were cut short,” Dawson said, “and also the shooter is such a young man. As a society, we’ve got to learn the value of life again.”

He urged anyone knowing Leonard’s whereabouts to contact authorities, and urged Leonard to turn himself in to police.

The chief would not say whether authorities believe more than one gun was involved.

He said he was not aware of any connection between Leonard and the university.

Auburn Mayor Bill Ham Jr. expressed sympathy to the victims’ families. “We are distraught that violence was used in such a senseless way and young lives were lost,” he said.

“This is a tragic day for the entire Auburn community,” Auburn Athletic Director Jay Jacobs said in a statement. “First and foremost, our thoughts and prayers go out to the victims and their families who have been devastated by this senseless tragedy.

“We will support the families of the victims in the difficult days ahead in every way that we possibly can,” he said. “Our student-athletes are obviously stunned and deeply saddened, and we are providing counseling and support for them as they grieve the loss of their teammates and friends.”

Gene Chizik, Auburn head football coach, called it “a sad, sad day for everyone associated with the entire Auburn family.” Chizik said he is “devastated” at the three deaths, including those of Christian and Phillips, who he knew personally.

“We have a lot of people on our football team that are hurting right now and we’re going to do everything we can to help them get through this,” he said. “We are relieved that Eric Mack, who was also a victim in this incident, is expected to make a full recovery. This is a very trying time for everyone involved, and I would just ask that you lift up the victims and their families in your prayers.”