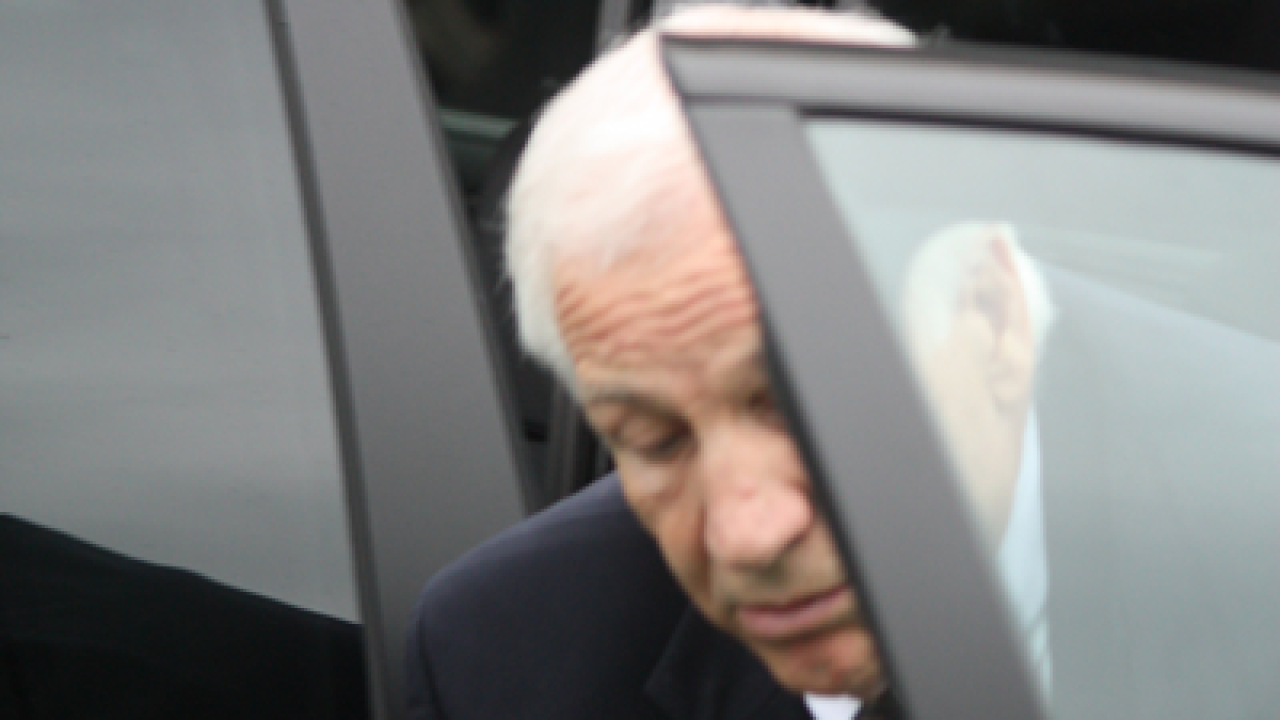 In an emotion filled courtroom, jurors on Wednesday heard graphic testimony from three alleged victims, the father of a then-graduate assistant who said he witnessed Jerry Sandusky raping a boy, and a janitor who testified that he saw two pairs of legs in a shower, believed to belong to the ex-coach and a child.

The men spoke on the third day of the case against the former assistant football coach, who’s pleaded not guilty to the 52 criminal counts and has denied his interactions with the children were sexual.

Five of 10 alleged victims have so far testified, whom prosecutors say were sexually abused over a span of 15 years. Two of the boys are not expected to take the stand.

Among those who testified Wednesday was a 25-year-old man identified as “Alleged Victim No. 10” who said that as a boy, he was sexually abused by Sandusky. Sandusky told him that if he told anybody, he would “never see my family again.”

At another point, the man said, Sandusky seemed to apologize: “He said that he didn’t mean it, and that he loved me.”

He testified that the former football coach sexually abused him on at least five different occasions in the basement of his central Pennsylvania home, pinning him down and engaging in oral sex.

Sandusky, meanwhile, sat nearly expressionless during Wednesday’s proceeding, listening intently during a trial that was initially expected to continue for three weeks but has since progressed more rapidly than expected.

Earlier Wednesday morning, John McQueary, the father of a then-graduate assistant who says he witnessed a rape, also took the stand.

“I knew there was something wrong,” the elder McQueary said, describing a phone conversation with his son following the alleged incident.

“I said, ‘What’s the matter?,’ ” McQueary recalled. His son, Mike, then told him: “Coach Sandusky (was) in the shower with a young boy,” he testified.

The former coach “was positioned behind the young man, and I believe he said up against the shower wall,” McQueary added. “He said, ‘It didn’t take a rocket scientist to figure out what was going on.’ ”

Defense attorney Karl Rominger cross-examined the younger McQueary on Tuesday, asking him about angles of his view and the reported date of the alleged incident, which prosecutors had to adjust from 2002 to 2001.

The elder McQueary also testified Wednesday that he met with Gary Schultz, the former Penn State vice president who oversaw campus police, to follow up on what his son had told authorities.

“I made Mr. Schultz aware that I knew of this incident, and understood that Mike had met with him, and he had told Coach (Joe) Paterno,” he said. “Mr. Schultz said that he had heard noise about this before, earlier than Mike’s report.”

Prosecutors claim Schultz held a secret file that detailed alleged incidents pertinent to the Sandusky investigation, which was initially not made available to the grand jury investigation.

Schultz and Tim Curley, Penn State’s former athletic director, have pleaded not guilty to charges of perjury and failing to report an alleged sexual assault of a child.

The file allegedly shows inconsistencies with what Schultz and Curley told a grand jury, according to court documents filed by prosecutors.

They say e-mails from Schultz, Curley and others further contradict their testimony, though CNN cannot independently confirm that account.

The university responded Tuesday saying that it had received “several subpoenas and gathered documents from many sources across the institution.”

“As soon as any relevant documents were discovered, the university immediately provided them to the office of the attorney general and the Freeh Group,” it said, referencing an independent investigation.

In opening statements, defense lawyer Joe Amendola suggested his client would take the stand and say he routinely “got showers with kids” after working out.

The former coach has always maintained his innocence, Amendola said, claiming his client’s alleged victims had changed their stories and were questioned until authorities received the answers they wanted.

“A lot of people lied,” Amendola said. Some of the alleged victims have civil attorneys, he noted, calling that unusual. Others, he said, have a financial interest in the case.

“One of the keys to this case, one of the keys to your perception … is to wait until all the evidence is in,” Amendola told jurors. “Some of it will be graphic. … It’s going to be awful. But that doesn’t make it true.”

Men identified as Alleged Victims No. 5 and 7 also testified Wednesday, telling jurors that they both attended college football games with Sandusky after joining his Second Mile camp.

“He had this habit of putting his right hand on my kneecap and squeezing. Sometimes I would just about call out in pain because it hurt,” alleged victim 7 said. “He started working his hand up my leg…sometimes up my shorts, to where he could touch my genitals.”

He added that Sandusky often hugged him in bed and washed his hair while with him in the shower. During cross examinations attorney Amendola accused the victim of changing his version of events and failing to report the alleged behavior.

On Tuesday, “Alleged Victim No.1” said he stayed at Sandusky’s house more than 100 times as a boy, and that the former coach repeatedly sexually abused him.

Now 18, the man said he grew up without a father, living with his mom and siblings, and met Sandusky at Second Mile, a foundation he created for needy children.

“At first he would kiss me on the forehead goodnight,” Alleged Victim No.1 testified on Tuesday. “Then it was kissing me on the cheek, then rubbing my back and cracking my back.”

Sandusky’s roaming hands would later move to “rub underneath my shorts,” he said. The alleged abuse further escalated when Sandusky “put his mouth on my privates.”

“I spaced,” the alleged victim said. “I didn’t know what to do.”

Later, the former coach allegedly told him that “it’s your turn,” he added. “He made me put my mouth on his privates.”

An elementary school wrestling coach also testified Tuesday, saying that he’d seen interactions between Sandusky and the boy and “thought it was a great thing because (the boy) needed a father figure.”

But coach Joe Miller recalled one day when returned to the weight room and found Sandusky and the alleged victim “laying together, side to side” with his arm around the boy.

“At the point Jerry propped up and said ‘Hey there, we’re working on wrestling moves,’ ” he testified. “They were both startled that I came in.”

The first person to take the stand after opening statements Monday was a now 28-year-old man identified as “Alleged Victim No. 4.” He said that Sandusky routinely had the then-teenage boy perform oral sex on him while the two showered together on the school’s campus and elsewhere

“It would have to be 40 times, at least,” he said, adding that the abuse started when he was 14-years-old.

Amendola told jurors former Second Mile children will testify that Sandusky affected their lives in a positive way, and he later showed a letter to Victim No. 4 in which the former coach wrote “I’m proud of you and really care.”

The defense lawyer also questioned some alleged victims’ behavior, including one who went to a football game with Sandusky prior to his arrest.

A jury of five men and seven women, along with four alternates, was selected last week. Half of the 16 jurors and alternates have ties to Penn State, including one retired professor and one current professor, three graduates, two employees and one current student, showing the prominence of the university in the local community.

The case has raised questions about Penn State’s response to the allegations and the way it handled protecting potential child victims.