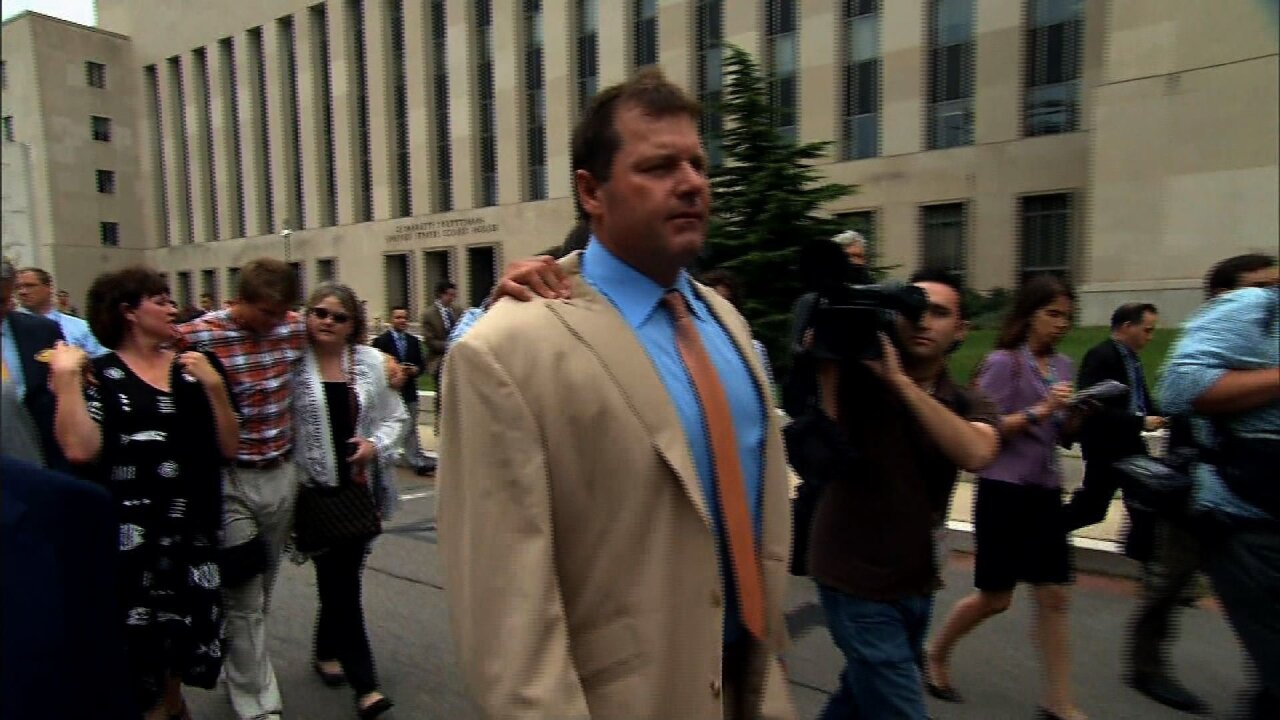 Famed baseball pitcher Roger Clemens walks outside court on Monday, June 18, 2012 after being found not guilty on six counts of lying to Congress. The charges against Clemens followed a congressional investigation of steroid use among major league players.

WASHINGTON (CNN) — Baseball pitching great Roger Clemens was found not guilty Monday of lying to Congress during an investigation of steroid use among major league players.

The case against Clemens involved one count of obstruction of Congress, three counts of making false statements and two counts of perjury. He was not charged with illicit use of performance-enhancing drugs, but his denial of such use was part of the case against him.

A federal jury found him not guilty on all six counts.

Clemens wiped his eyes after the verdict was announced, then hugged his likewise emotional sons. His lawyer, Rusty Hardin, meanwhile, gave a thumbs-up to the jury before leaving the courtroom.

Minutes later, Clemens thanked his family, lawyers and others who have supported him during the trial and in the years since he was accused of using illicit performance enhancing drugs.

“I put a lot of hard work into (my) career,” he told reporters, choking up on the steps of the federal courthouse in Washington. “I appreciate my teammates that came in, and all the e-mails and phone calls.”

Hardin thanked the jury, and lavished praise on his client for his demeanor and character.

“It has been 4½ years since we listened to a picture that doesn’t match up at all with the man we have grown to know and love,” the lawyer said. “He is not only a seven-time Cy Young winner, he’s a hell of a man.”

Members of the U.S. attorney’s office in the District of Columbia said little about the verdict Monday afternoon, beyond thanking the jury and investigators in a brief statement.

“We respect the judicial process and the jury’s verdict,” the U.S. attorney’s office said.

Six days earlier, federal prosecutor Courtney Saleski told jurors in closing arguments that Clemens “wanted to protect his brand, he wanted to protect his livelihood,” in denying the use of steroids during a 2008 investigation by the U.S. House of Representatives into the problem.

The Clemens defense team disputed whether the government had made its case, telling the jury all the evidence came through a former personal trainer, Brian McNamee, who had incentive to lie.

“You saw Brian McNamee, the only witness in the history of the world who says he gave or saw an injection of that man,” said defense attorney Michael Attanasio. “One person in the entire world.” During closing arguments, the defense cited the lack of corroborating witnesses.

It took about eight weeks for the prosecution and defense to question 46 witnesses, and the most direct conflict came among expert witnesses as to how to interpret a collection of discarded medical items that allegedly linked Clemens to steroid use. The pitcher did not take the stand in his defense.

Soiled medical wrappings, cotton balls, drug vials and hypodermic needles that McNamee kept were interpreted differently by each side. Witnesses for the government said genetic material linked with Clemens suggested it was impossible for McNamee to fabricate the evidence.

But defense witnesses on the same topic said storage in a beer can for years allowed commingling and contamination of materials, making reliable conclusions impossible, and the evidence nearly worthless.

CNN senior legal analyst Jeffrey Toobin said a big part of Clemens’ defense was, in essence, putting Congress on trial — claiming they were never serious about using whatever testimony was given to shape future legislation.

“He was basically saying, Congress was putting on a show. They didn’t care,” Toobin said of Hardin. “They just wanted Clemens to come up there, they weren’t planning to do anything with the testimony.”

This was the second trial for Clemens. About a year ago, a mistrial was declared before the case reached the jury. The government’s lawyers played video evidence the judge had already banned. Prosecutors said it was an editing mistake, but the Clemens defense team suggested prosecutors were unprepared and had gotten off to a bad start.

The verdict comes six months after Barry Bonds got two years of probation and 30 days of house arrest for obstruction of justice in a federal steroids-related case and days after federal prosecutors dropped all remaining charges against former Democratic presidential candidate John Edwards, less than two weeks after his corruption trial ended in an acquittal and mistrial.

“It was not a great case, but this is a real blow to the Justice Department,” Toobin said of prosecutors’ case against Clemens.

Known as “The Rocket,” Clemens was among the most accomplished pitchers of his generation, earning seven Cy Young awards as his league’s best pitcher and 11 All-Star appearances before retiring in 2007. He was known for his blazing fastball — his 4,672 strikeouts are the third most of any Major League pitcher — as well as his excellence over all stages of his 24-year career.

But the Texas native made news for a different reason in 2007, when he was among a number of baseball stars — along with others including Bonds, Gary Sheffield and Jason Giambi — in an investigation by Major League Baseball into the illicit use of performance-enhancing drugs. That investigation was led by former U.S. Senator George Mitchell.

Yet despite being accused by his longtime former trainer, Clemens has consistently and strongly denied using steroids. That includes comments he made during the 2008 congressional hearing delving into the Mitchell Report and later in reaction to his six-count indictment.

Hardin, the now-49-year-old pitcher’s lawyer, bemoaned how people labeled his client arrogant because he denied using performance-enhancing drugs. He insisted Monday that Clemens — who will become eligible for entry into baseball’s hall of fame next year — “from (age) 16 to 45 was the same person.”

“I hope those in the public that made up their mind (about Clemens’ steroid use) before there was a trial will now back up and entertain the possibility of what he’s always said: Using steroids and HGH is cheating, and is totally contrary to his entire career,” said Hardin.

CNN’s Paul Courson and Joe Johns contributed to this report.