UPDATE 6 p.m.: Rocky Mountain Power says 324 customers are without power. They are now saying residents should be prepared to be without power through Sunday. Officials believe the fire damaged an underground distribution system.

Photos from Scott McKane, who is in Herriman Saturday afternoon:

UPDATE 5:30 p.m.: Herriman City says on Facebook:
"The evacuation order for all areas will be officially lifted at 6 pm tonight, with restricted access to residents only on Majestic Oaks Rd and Rose Creek Lane. Residents in these two areas will be required to go through a check point and need to know there is currently no power, but efforts are in place to repair it quickly."

"Not sure if it was a house or barn, but it was another structure," Osborn said. "We do have four confirmed structures that have burned."

There are numerous other structures that have burned in the Rosecrest Fire. Unified Fire Authority officials are still assessing the damages. Winds are starting to pick up.

Evacuees may not be able to return until later today.

Herriman city officials said Hamilton Farms, Ivie Farms, Sky Haven, Overlook Estates area, Cocomo Court and neighborhoods north of Rose Canyon Road are now accessible. These areas were not include in the evacuation zone but were restricted for access after the evacuation was implemented.

Authorities managed to evacuate animals as they fought the Rosecrest Fire, but they do not know who their owners are. Call Salt Lake Coutny Animal Services at 801-559-1100.

Evacuations remain in place. A "Type 3" team is coming in this morning to fight the fire, bringing with it more resources.

HERRIMAN, Utah -- Three homes were destroyed and at least 200 more threatened after a 350-acre brush fire raged through neighborhoods in Herriman.

Firefighters were called out to 15145 S. Rose Canyon Road. at about 3:30 p.m. Mandatory evacuations were ordered. City officials said 6400 West is the eastern evacuation boundary. Areas south of Rose Canyon Road and, when Rose Canyon curves and heads south, areas east of that. [See the evacuation map, CLICK HERE]

By 9 p.m., much of the "Rosecrest  Fire" was suppressed and firefighters were putting out hot spots. Evacuees were not allowed to return home until it was safe to do so.

Unified Fire Authority officials told FOX 13 the fire is in "The Cove" subdivision and was started after the embers from a burning car set the grass on fire along Rose Canyon Rd.

Air tankers attacked the fire on the mountainside as helicopters used a pond at the base of The Cove to refill and put out fires threatening homes. At its height, the 10-alarm fire had 300 firefighters, along with nine fire engines and five ladder trucks.

Authorities have asked all Herriman residents to turn off their sprinklers or deactivate their automatic sprinkler systems so that they can use maximum water pressure to fight the fire.

Any animal evacuations should go to the Salt Lake County Equestrian facility to Barn 7 at 2100 West and 11400 West. Small pets are allowed to be brought with residents at the Herriman High School evacuation point.

The Rosecrest  Fire is comparable to the Machine Gun Fire from 2010. During that fire three homes were also destroyed after a military drill at Camp Williams involving machine gun target practice sparked a grass fire during high winds. The fire worked its way into a Herriman neighborhood and forced the evacuation of thousands of residents.

Donations to help affected residents can be made through the Utah Red Cross. 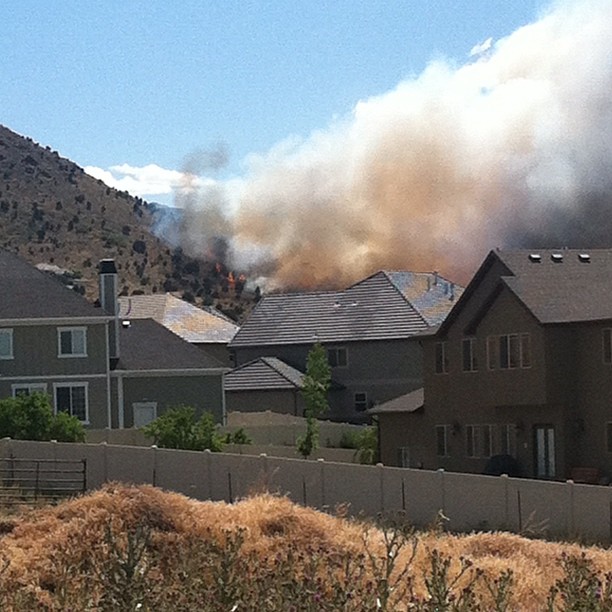