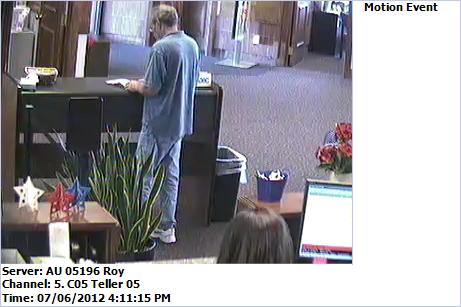 ROY, Utah – Police are looking for a man they say robbed two banks in Utah and Idaho on Friday afternoon.

The first robbery occurred at around 1 p.m. on Friday at the Ireland Bank (486 Yellowstone Ave.) in Pocatello, Idaho. The Idaho State Journal says a Provo Police Dept. news release indicated that the suspect was carrying a black folder and handed the teller three envelopes, one containing a note demanding an undisclosed amount of money. The suspect then left with an unknown means of travel.

The Roy Police Dept. says that a man with the same description and method of operation robbed the Wells Fargo Bank located at 5600 South and 1900 West in Roy at about 4:30 p.m.

They say the man handed a teller a note saying he has four months to live and needs money. A Roy Police Dept. news release says that a threat was made requiring compliance.

Police say that, given the nature of his threat and his circumstance, they hope to locate the man.

He is described as a very thin white male in his 50s, approximately 5-feet, 6-inches tall with grey and white facial hair.

The man was wearing blue jeans, a blue polo shirt, a coat and thick glasses during both robberies.

Anyone with information is asked to contact the Roy Police Dept.