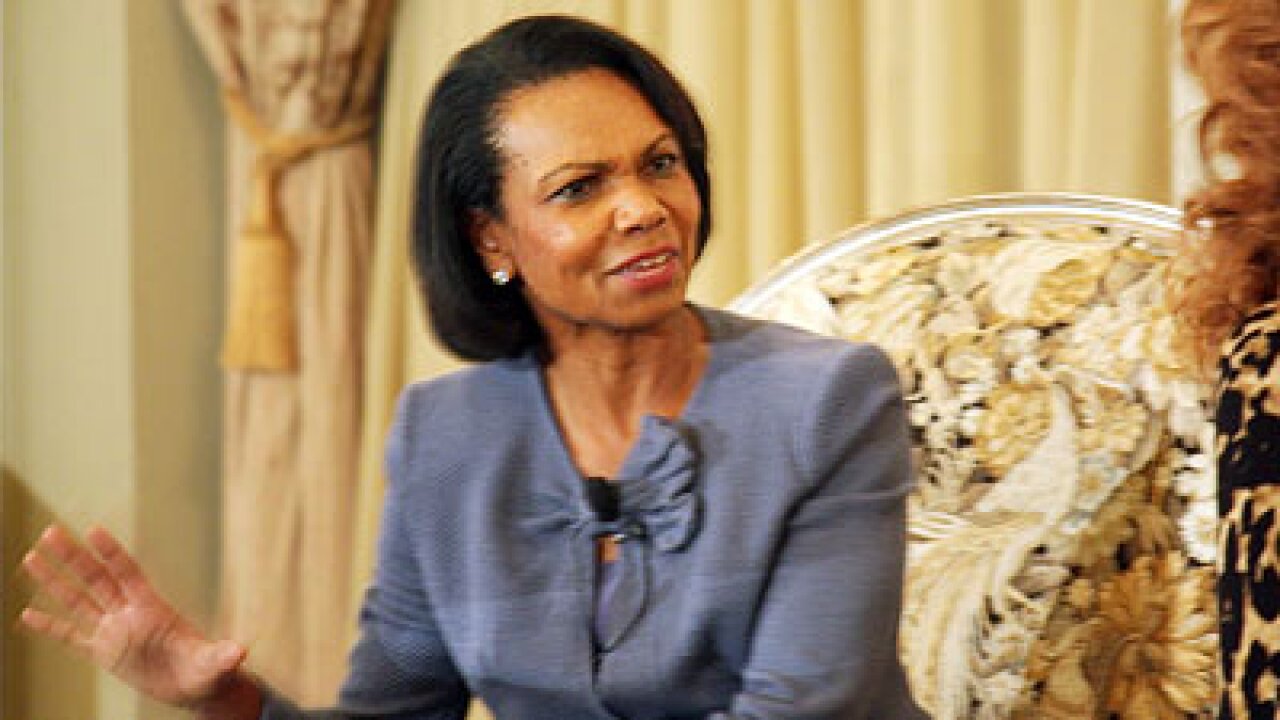 Former Secretary of State Condoleezza Rice speaks about her book in October 2010.

(CNN) — While Mitt Romney was raising money in Wyoming with former Vice President Dick Cheney, a screaming headline on a popular and influential conservative website stirred speculation about whom the presumptive GOP presidential nominee will choose as his running mate.

The headline on the Drudge Report Thursday night: Romney had narrowed the field of prospective candidates to a handful, according to sources, “and a surprise name is now near the top of the list: Former Secretary of State Condoleezza Rice! The timing of the announcement is now set for ‘coming weeks.’ “

Rice’s name has been bandied about by the media for a couple of months as someone that the former Massachusetts governor would possibly consider as his vice presidential nominee. And thanks mostly to name recognition, she topped the list of whom Republicans would like to see as Romney’s running mate in a CNN/ORC International poll conducted in mid-April.

Rice, who served as President George W. Bush’s national security adviser and then as secretary of state from 2005 to 2009, becoming the first African-American woman to lead the State Department, is an intriguing choice. And she was said to have impressed a crowd of top Romney officials and contributors at a major weekend retreat a few weeks ago in Park City, Utah. Her speech at that retreat was considered the breakout performance of the weekend.

But before speculation runs rampant, a reality check.

Romney has said that he will pick a running mate who opposes abortion.

“My vice presidential nominee will be pro-life,” Romney said at a rally in Shelby, Michigan, on February 21.

And Rice appears to favor abortion rights, telling CBS in 2008 that she was “mildly pro-choice.”

The Drudge Report headline sparked a groundswell of anger among social conservatives. Erick Erickson, a CNN contributor and the editor of Red State, a popular conservative blog, tweeted that he had been assured by people in the Romney campaign that the choice would not be Rice.

But the last Republican vice presidential nominee thinks Rice would be a great choice.

“I think that Condoleezza Rice would be a wonderful vice president, and she certainly has much more experience than our sitting president does today,” former Alaska Gov. Sarah Palin said Thursday night on Fox News.

And Palin, who opposes abortion and who said she “would certainly prefer a “pro-life candidate” as running mate, says that Rice’s stance on the issue is not a problem.

“We need to remember, though, that it’s not the vice president that would legislate abortion, and that would be Congress’s role. And we’ll keep that in mind.”

Besides abortion, Rice and Romney appear to differ on the hot topic of illegal immigration, with the former secretary of state seemingly more supportive than Romney of giving some illegal immigrants a pathway towards legitimacy.

She told CNN’s Candy Crowley on “State of the Union” last year that not being able to get immigration reform done on her watch was one of her greatest regrets.

And Rice has shot down speculation that she would appear on the Republican presidential ticket.

“I cannot imagine myself running for office,” she told CNN’s “Piers Morgan Tonight” in January. “Not because politics are so tough, but it’s just not me.”

She reiterated that position as recently as three weeks ago, telling CBS’ “This Morning,” “I didn’t run for student council president. I don’t see myself in any way in elected office. I love policy. I’m not particularly fond of politics.”

Pressed on whether she would turn down an offer, Rice argued it was a hypothetical situation unlikely to come true, and added, “It’s not going to happen.”

Last week Romney’s wife weighed in on the process, saying that her husband is considering a woman as his running mate.

“We’ve been looking at that,” Ann Romney said when asked in a CBS interview whether her husband should select a woman to join him on the GOP ticket. “I’d love that option as well. So, you know, there’s a lot of people that Mitt is considering right now.”

Besides Rice, other women that have been mentioned in the past in the media as possibly being under consideration by Romney were Sen. Kelly Ayotte of New Hampshire, New Mexico Gov. Susana Martinez, South Carolina Gov. Nikki Haley, and Oklahoma Gov. Mary Fallin.

Of course the only people who know for sure who’s being considered are likely Romney, his wife Ann, and Beth Myers, the trusted Romney aide who’s running the search for the running mate.

And they’re not talking.

The report in Drudge came after a day in which the GOP challenger came under attack from President Barack Obama’s re-election team over the timing of Romney’s departure from Bain Capital, the private equity firm he co-founded. That story dominated media headlines throughout Thursday, and the Drudge Report story helped draw attention away from the Bain story and onto the speculation over Romney’s choice of a running mate.

The report also came a couple of hours after the Romney campaign, in a fundraising email to supporters, teased the vice presidential nominee pick.

“We’re getting ready to share some exciting news,” Romney’s campaign manager, Matt Rhoades, emailed supporters on Thursday. “Sometime between now and the Republican convention, Mitt will be announcing his choice for VP.”