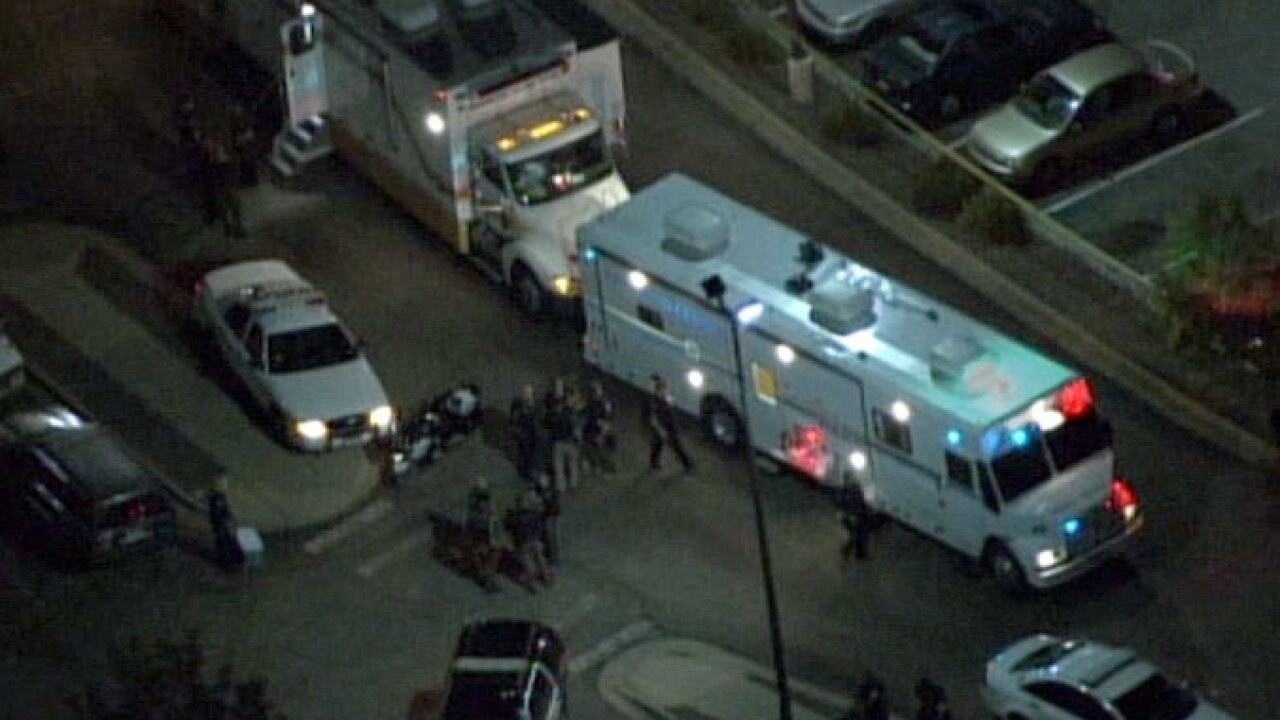 (CNN) — The suspect in the mass shooting at an Aurora, Colorado, movie theater screening of the new Batman film early Friday had colored his hair red and told police he was “the Joker,” according to a federal law enforcement source with detailed knowledge of the investigation.

At least 12 people were killed in the rampage and 58 were wounded.

A mug shot of James E. Holmes has not been released. Witnesses to the shooting described him as wearing a gas mask that concealed much of his face and head. But the federal law enforcement source’s information about the suspect’s appearance fits with a statement from New York Police Commissioner Ray Kelly, who was briefed by Colorado authorities Friday.

The Joker has long been a fixture in Batman comics and was famously brought to life by the late Heath Ledger in 2008’s “The Dark Knight,” the predecessor to Friday’s release of “The Dark Knight Rises.” Ledger won a posthumous Academy Award for his sinister portrayal of the iconic villain who encourages anarchists to take over Gotham City.

Meanwhile, authorities were faced with the difficult task of entering Holmes’ Aurora apartment, which was left rigged with traps.

“It’s booby-trapped with various incendiary and chemical devices and trip wires,” Aurora Police Chief Dan Oates said, adding that it could take days to work through the apartment safely.

Five buildings around the apartment building were evacuated, Oates said.

Police say Holmes, 24, dressed head-to-toe in protective tactical gear, set off two devices of some kind before spraying the Century 16 theater with bullets from an AR-15 rifle, a 12-gauge shotgun and at least one of two .40-caliber handguns police recovered at the scene.

Law enforcement sources said the weapons were purchased legally by Holmes at sporting goods stores in the Denver area over the past six months.

The shooting unfolded inside a darkened theater packed with Batman fans, some in costume for the premiere of the movie.

Aurora police said how the suspect entered the theater is still under investigation.

A law enforcement source working the investigation told CNN that the gunman walked into the movie theater after purchasing a ticket.

After the movie was under way, he went out a rear exit door, propping it open, and gathered weapons before re-entering through the door, the source said.

As he re-entered, he tossed in a canister before starting to shoot, according to a second law enforcement source involved in the investigation and several witnesses.

Screaming, panicked moviegoers scrambled to escape from the black-clad gunman, who shot at random as he walked up the theater’s steps, witnesses said.

It was a scene “straight out of a horror film,” said Chris Ramos, who was inside the theater.

“He was just literally shooting everyone, like hunting season,” Ramos said.

A federal law enforcement official told CNN the man used tear gas, but Oates said Friday afternoon that it was not clear what the substance was.

Holmes surrendered without resistance within seven minutes of the first calls from panicked moviegoers reporting the shooting, Oates said.

Victims flooded overwhelmed hospitals. One of the injured is just 4 months old, the child’s mother said. The infant was treated and released from the hospital.

“I don’t know how else to explain it. It’s horrific,” said Tracy Lauzon, director of EMS and trauma services at Aurora Medical Center.

Oates said the man was wearing a ballistic helmet and protective gear for his legs, throat and groin, black gloves and a gas mask.

Jennifer Seeger, who survived the attack, said she had seen the man and thought his get-up was part of the entertainment for the film’s debut.

She said the man first shot toward the ceiling, then began shooting at people. He reloaded during his attack, she said.

“He was just literally just massacring anybody that got up that was trying to run away,” Seeger said.

Holmes is scheduled to appear in an Arapahoe County, Colorado, courtroom Monday morning, Rob McCallum, spokesman for the Colorado Judicial Department, said Friday. The court file was sealed, according to a court order.

A statement from Holmes’ family in San Diego asked for “privacy during this difficult time.”

“Our hearts go out to those who were involved in this tragedy and to the families and friends of those involved,” the statement said, adding, “We are still trying to process this information.”

The FBI is assisting in the investigation, officials said, though it did not appear that the incident was related to terrorism.

Prior to Friday’s shooting, Holmes’ criminal record in Aurora consisted only of a traffic summons.

Colorado Gov. John Hickenlooper said the attack was the work of a “very deranged mind.”

“Obviously no words can express the intensity of this tragedy,” he said.

President Barack Obama canceled campaign events Friday, telling supporters at what had been scheduled as a rally in Fort Myers, Florida, that “there will be other days for politics.”

“This will be a day for prayer and reflection,” he said, calling for the country to unite as one and support the victims.

“Such violence, such evil is senseless. It is beyond reason,” he said before ending the event to return to Washington.

Flags at the White House were lowered to half-staff Friday afternoon in honor of the victims.

CNN iReporter Adam Witt, who was in the theater, said it took a few gunshots before he figured out what was going on.

“I hit the floor and hid behind the seats in front of me, pulling my wife down to hide with me,” Witt said. “It was the longest minute of my life. The gunshots just kept coming. I knew it could be over any second. I knew my wife could be gone any second. It was absolutely surreal. I felt something hit my left arm, and my first thought was, ‘At least it’s just my arm.'”

“There were so many people running,” he said. “I didn’t look back. I just remember getting up from the floor and shouting, ‘We have to run.'”

Officers rushed many of the wounded to hospitals in their patrol cars.

Agents from the Bureau of Alcohol Tobacco, Firearms and Explosives were conducting emergency traces on the weapons to see how they were obtained, agency spokesman Tom Mangan said.

A law enforcement source said two of the guns were purchased at a Bass Pro Shop in Denver, while the two others were bought at separate Gander Mountain Guns outlets in the area. Investigators also found a drum magazine, capable of carrying 100 rounds of ammunition, which was attached to the AR-15 rifle, two law enforcement officials said.

A statement from Bass Pro Shops said its Denver store followed appropriate protocol on the sale of the two weapons.

Authorities also searched the suspect’s car in the parking lot of the movie theater and found more magazines and ammunition, a federal law enforcement official said.

“It was everywhere,” the official said.

Warner Bros., the studio behind the movie, said the company and filmmakers were “deeply saddened” to learn of the incident.

The film’s director, Christopher Nolan, condemned the shooting as “savage” and “appalling.”

“The movie theatre is my home, and the idea that someone would violate that innocent and hopeful place in such an unbearably savage way is devastating to me,” Nolan said in a statement on behalf of the cast and crew of the film. “Nothing any of us can say could ever adequately express our feelings for the innocent victims of this appalling crime, but our thoughts are with them and their families.”

Warner Bros. canceled the movie’s Paris premiere, while New York police Commissioner Raymond Kelly said his officers would watch over screenings of “The Dark Knight” in the city to prevent copycat shootings. AMC Theatres, meanwhile, said it would not permit guests in costumes that make others uncomfortable, nor will it allow face-covering masks or fake weapons.

Aurora, a Denver suburb, is about 13 miles from Littleton, Colorado — site of the April 1999 Columbine High School massacre.

In that incident, two teenage students, Dylan Klebold and Eric Harris, armed themselves with guns and bombs and shot people inside the high school. They killed 13 and wounded 23 before killing themselves.