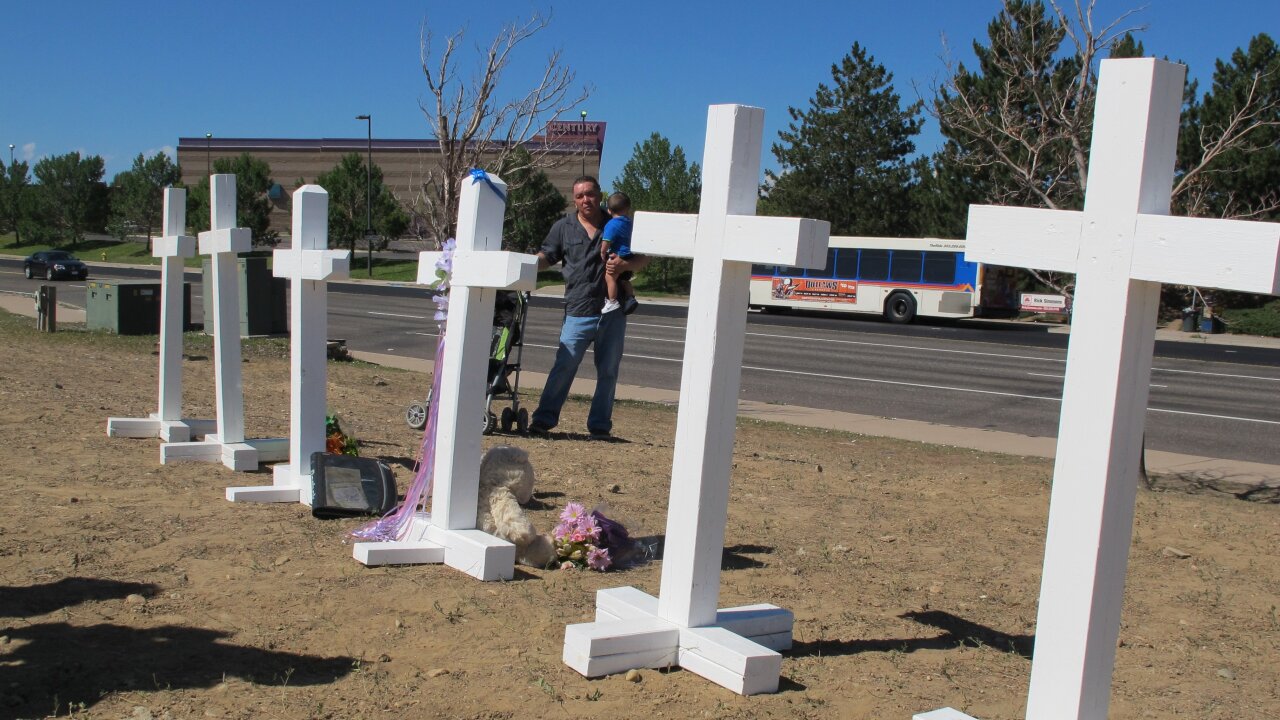 Crosses where erected across the street from the Aurora, Colorado movie theater where James E. Holmes, 24, is accused of killing 12 people and wounding 58 in the suburban Denver community of Aurora on Friday, July 21, 2012 during a midnight screening of the Batman movie “The Dark Knight Rises.”

AURORA, Colorado (CNN) -- Stories of heroism, zest for life and a birthday celebration that turned tragic emerged as family and friends spoke of loved ones killed in Friday's mass shooting at an Aurora movie theater.

Almost all of the 12 victims were young -- including a 6-year-old girl who had just learned to swim -- with so much life ahead of them.

The cause of death in all cases is related to gunshot wounds, according to the Arapahoe County Coroner's Office.

Blunk was supposed to fly Saturday to Reno, Nevada, to see his wife, 4-year-old daughter and son, 2.

"We were going to have a family day," said wife Chantel Blunk.

Instead, she put up the dress her daughter had picked out to wear to the airport. "I tried to tell her we wouldn't see Daddy anymore. But that he would still love us and look over us."

Jonathan Blunk served five years in the U.S. Navy, including service aboard a vessel in San Diego. Her husband said if he died, he wanted it to happen in battle, Chantel Blunk told CNN.

The Reno couple married in 2007 and separated in 2010, she said. The pair remained on good terms after Jonathan moved to Aurora. He held various positions and was trying to get back into the service, she said.

Chantel Blunk said she wants her husband to have a military funeral. She said she will remember Jonathan's humor, spontaneity and attention to family.

Hailey, 4, is comforted by calling her father's cell phone and hearing him on voice mail.

"We love him and he is going to be remembered as a hero," Chantel Blunk said.

A Facebook page was created in memory of Boik, a Gateway High School student who was at the theater with his girlfriend and a friend.

"AJ was an awesome kid and a truly Inspirational teammate," one individual wrote on the page. "You cant find someone with a brighter smile and more positive outlook on life. There to help you up when your down and One to carry on life with such an intelligence."

Boik was an independent distributor for Organo Gold, a coffee company, and lived in Aurora, according to what appears to be his personal Facebook page.

James Crofter, father of Jordan Crofter, Boik's friend who survived the shooting, said Jordan and Boik played lacrosse together. Boik's girlfriend also was in the theater. She and Jordan found each other outside the theater, but Boik did not make it out.

Childress, an Air Force reservist, was a cybersystems operator on active duty with the 310th Force Support Squadron at Buckley Air Force Base in Colorado. He was from Thornton, Colorado.

Three of Childress' Air Force colleagues traveled from Buckley to honor Childress at a memorial near the theater, The Denver Post reported.

"He was a huge part of our unit, and this is a terrible loss. The person that did this was an incredible coward," said Air Force Chief Master Sergeant Schwald, according to the Post. She declined to give her first name.

Cowden took his two teenage children to the theater. His children escaped unharmed, according to California's Ventura County Star.

A family spokesman described Cowden as a "loving father, outdoorsman and small business owner," according to the Star.

"Cowden was a true Texas gentleman that loved life and his family. A quick-witted world traveler with a keen sense of humor, he will be remembered for his devotion to his children and for always trying his best to do the right thing, no matter the obstacle."

Aspiring sports reporter Ghawi narrowly avoided another shooting incident in Toronto just last month -- an incident that prompted her to reflect on life on her blog.

The Toronto shooting at the Eaton Centre left one person dead and seven injured.

"I was shown how fragile life was on Saturday. I saw the terror on bystanders' faces. I saw the victims of a senseless crime. I saw lives change," she wrote at the time. "I was reminded that we don't know when or where our time on Earth will end. When or where we will breathe our last breath."

Ghawi, who also went by the name Jessica Redfield, grew up in Texas and interned at Ticket 760, a sports radio station in San Antonio, before moving to Denver to try to break into the television market there.

A memorial service is scheduled for July 28 in San Antonio.

Like his father and grandfather, Larimer chose to join the U.S. Navy. He was serving at his first post, said his father, Scott Larimer.

A Navy notification team officially informed the family in Crystal Lake, Illinois, around midnight Saturday, a statement from the family said.

"He was an outstanding shipmate, a valued member of our Navy team and an extremely dedicated sailor," said Cmdr. Jeffrey Jakuboski. "Sailors were really drawn to his calming demeanor and exceptional work ethic. He was also known as that quiet, extremely competent professional."

"He was doing extraordinarily well" and had a bright future ahead of him, Jakuboski said of Larimer.

His unit, part of U.S. Fleet Cyber Command/U.S. 10th Fleet, was stationed at Buckley Air Force Base in Colorado. Larimer had been in the service about one year. He had not seen combat.

"We send our thoughts and prayers out to the families of the other victims and those still recovering in the hospital," his family said. "We love you, John, and we will miss you always."

McQuinn died trying to provide cover for his girlfriend, Samantha Yowler, during the shooting, according to family attorney Rob Scott.

Yowler and her brother Nick, who also was trying to protect her from the bullets, both survived.

Samantha Yowler, hit by a bullet in the knee, was recovering from surgery and is expected to make a full recovery, according to Scott. Nick was unharmed.

McQuinn and Samantha Yowler grew up in the Miami Valley region of Ohio, according to CNN affiliate WKEF. The two had been dating for a couple of years.

The victim's stepfather, David Jackson told CNN Dayton affiliate WHIO that the couple was planning to move back to Springfield soon.

"I know he's a hero," said Jackson. "He and Sam were very much in love and planning their life together. I am sure they were thinking very seriously of getting married soon."

Medek, known as Cayla to her friends, was "very spiritual and close to God," cousin Anita Busch told CNN. Her family is tight-knit, Busch said.

Medek's Facebook page describes her as a "sandwich artist/closer" at Subway in Aurora, and a student of general studies at the Community College of Aurora with plans to graduate in 2015.

She lived in Westminster, Colorado, but was from Aurora, Busch said. "I'm a simple independent girl who's just trying to get her life together while still having fun," Medek wrote on her Facebook page.

Busch said the family did not learn of Medek's death for 19 hours. "We had been desperately trying to find her," she said.

Described as a "vibrant little girl," Veronica had just learned to swim and was "excited about life," her great-aunt said.

The girl's mother was critically injured at the movie theater, with wounds to the neck and abdomen, said Annie Dalton. "All she is asking about is her daughter."

"Her whole life has changed in a flash, for what? She still doesn't know her daughter is gone. Now our priority is to make sure that she survives this," Dalton said of Ashley Moser, 25.

Ashley Moser has just gotten into a licensed practical nurse program, Dalton told reporters. "Obviously, with this injury she not going to be able to start school like she planned. It's a dramatic change in everything."

Veronica was an only child.

Alex "Sully" Sullivan went to the movie to celebrate his birthday, two days before the first anniversary of his marriage to his wife, Cassie.

"Oh man one hour till the movie and its going to be the best BIRTHDAY ever," he tweeted.

"The Sullivan family lost a cherished member of their family," a representative for the family said in a prepared statement. "Alex was smart, funny, and above all loved dearly by his friends and family."

His uncle, Jim Loewenguth, said Sullivan was an employee at the theater, but was off that night. Sullivan was "full of joy" and "never had a bad chip on his shoulder," he said.

A native of Phoenix, Alex Teves was a recent graduate of the University of Denver.

"He was a wonderful nephew," said paternal aunt Barbara Slivinske of New Jersey. The victim's parents traveled to Aurora after the incident.

He graduated in June with a master's degree in counseling psychology within the Morgridge College of Education.

"Our deepest condolences are with Alex's family and friends, including the many current students and faculty who knew and worked with Alex," the university said on its Facebook page.

Wingo's father wrote an emotional Facebook post about the loss of his daughter, originally from Quinlan, Texas.

"I lost my daughter yesterday to a mad man, my grief right now is inconsolable, I hear she died instantly, without pain, however the pain is unbearable. Lord why, why, why????," Steve Hernandez wrote. "I sit here and resist this entry however I feel I must, in disgust, in dismay, in prayer, I love you my daughter Rebecca, we all will miss you."

Wingo joined the Air Force after high school, became fluent in Mandarin Chinese and served as a translator, according to CNN Dallas-Fort Worth affiliate WFAA.

She had "the sweetest smile you've ever seen," said friend Hal Wallace. "She got prettier as she grew older."

Wingo moved to Colorado with her two young girls, and wrote about how the youngest was excited to start kindergarten.

Said Wallace: "In the blink of an eye something happens and completely changes everyone's life -- forever."