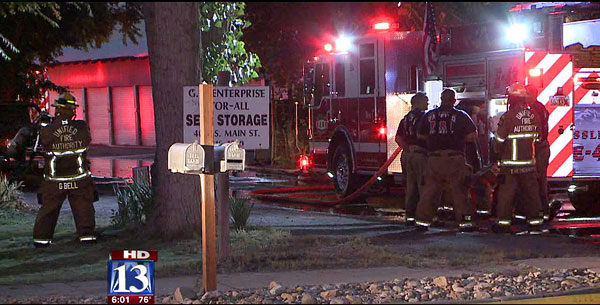 MILLCREEK, Utah — A two-alarm fire tore through a storage facility early Friday morning. It broke out just before 1 a.m. at 4017 South and Main Street.

Investigators said the cause of the fire was someone working with heavy machinery inside a middle storage unit. The fire quickly spread from there in both directions along the strip of units. In total, 22 united have been ruled a total loss.

Firefighters had to tear down the units to ensure that the fire was completely out.

Ernesto Gonzalez rented two units that were destroyed. He said he paid about $250 a month for each to store what he described as $30,000 worth of valuables.

“Old pianos, worth a lot of money, my Jet Skis. Just family photos. Just a lot of stuff,” said Gonzalez. “Everything in there was obviously worth something [because] I had it in storage.”

Crews had to use power saws to cut the steel doors open before the flames could be extinguished.

“All the storage units had smoke and fire coming out of them, heavy smoke on both ends” said Steve Ball, Unified Fire Authority. “As they’ve opened up units they found more fire inside of those units all the way to the end.”

Fire crews say because they had no idea what was being stored in the units, the fire was treated as a hazardous material incident. About 50 firefighters from Murray, South Salt Lake and Unified Fire responded to the fire.

Officials said a witness was on the scene, but was not hurt.

Fire crews continue to open other units on the property to access water, smoke or other damage.