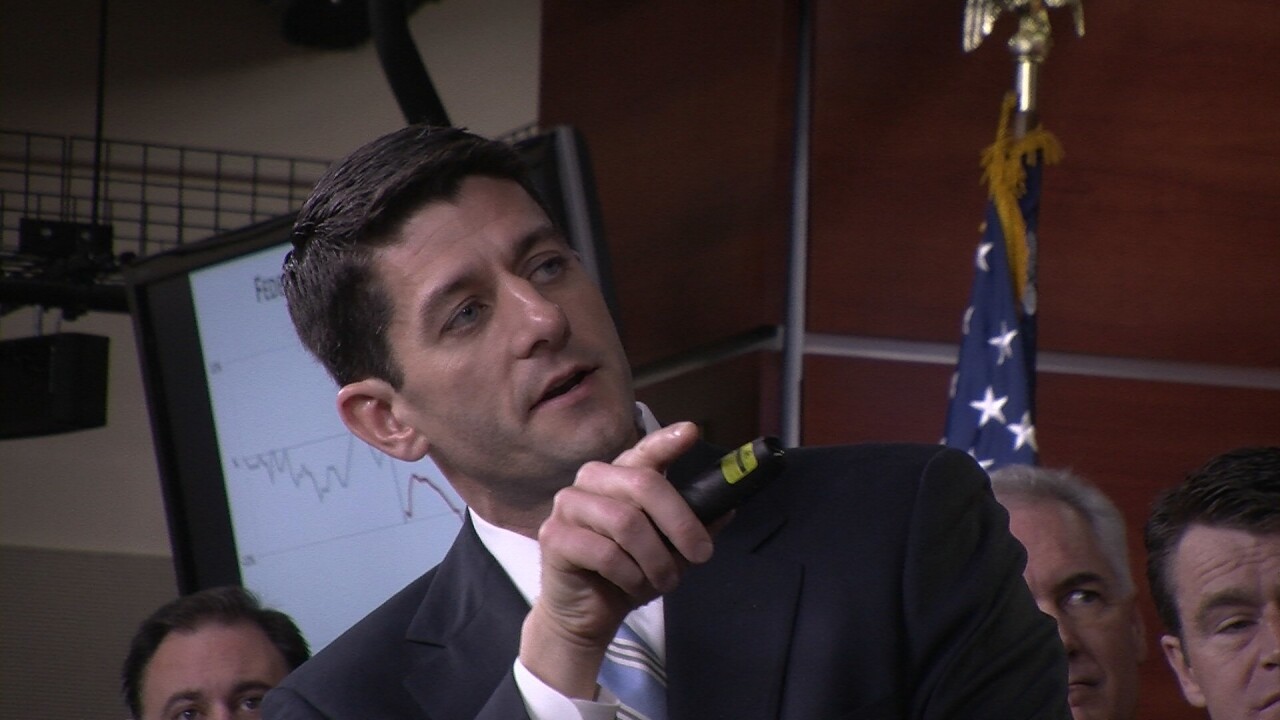 NORFOLK, Virginia (CNN) -- Mitt Romney on Saturday announced U.S. Rep. Paul Ryan of Wisconsin as his running mate for the White House -- a bold and risky move that energized both conservatives and their opponents.

Ryan is a rising Republican star and the party's leader on fiscal and budget issues. He is the architect of a Republican spending plan that would overhaul many entitlement programs, making him a favorite of conservatives, whose support for Romney, the presumptive Republican presidential nominee, has been shaky.

But the Romney camp was also quick to put some distance between Ryan's initial budget blueprint and his own.

"Gov. Romney applauds Paul Ryan for going in the right direction with his budget," the Romney campaign said, "and as president he will be putting together his own plan for cutting the deficit and putting the budget on a path to balance."

His running mate choice draws some clear lines with Romney's Democratic opponents over the size of the cuts in Ryan's plan and his prior votes on taxes, which they say favor the wealthiest Americans -- a point of contention in an election in which both sides consider themselves champions of the middle class.

"I have long supported Paul Ryan's fiscal and entitlement reforms to return our country back on a path of fiscal health."

Ryan, 42, is considered a policy wonk and conservative Catholic likely to energize the GOP base and sharpen the campaign's focus on government spending and the economy.

That could boost Romney's appeal among middle-of-the-road Catholic voters in battleground states such as Ohio and Pennsylvania, though Ryan offers little in the way of foreign policy experience.

The House Budget Committee chairman was chosen ahead of Sen. Marco Rubio of Florida, former Minnesota Gov. Tim Pawlenty and Sen. Rob Portman of Ohio. A campaign aide told CNN that Romney decided on Ryan on August 1. GOP sources said Friday that the latter three had all been told that they wouldn't be getting the nod.

Meanwhile, Vice President Joe Biden contacted Ryan, welcoming him to the race, saying that he "looked forward to engaging him on the clear choice voters face this November."

And Democrats were quick to make Ryan's fiscal policies a target.

"Congressman Paul Ryan and Mitt Romney are a match made in millionaires' heaven, but they'll be a nightmare for seniors who've earned their Medicare benefits," said New York Rep. Steve Israel, chairman of Democratic Congressional Campaign Committee, "For the last 18 months, we've said Republicans will have to defend the indefensible -- their vote to end Medicare. Now with Congressman Ryan on the ticket, House Republicans face the one thing they hoped to avoid -- a national debate on their budget that puts millionaires first and Medicare and the middle class last."

The announcement comes at the end of a week in which Democrats continued relentless attacks on Romney over his refusal to reveal more of his tax records and which saw three polls in 24 hours showing Obama with a growing lead over his Republican challenger.

A CNN/ORC International poll released Thursday showed a big jump in those who had an unfavorable opinion of the GOP candidate.

While some analysts saw Romney's choice as risky, others thought Romney had to go big.

"With Mitt Romney losing ground to President Obama in the polls, I don't see the selection of Paul Ryan as 'risky,' I see the choice as bold and necessary," Republican consultant Ford O'Connell told CNN.

CNN senior political analyst David Gergen says the Ryan pick is, "an opportunity for the Romney campaign to go on the offense."

Ryan, appearing with Romney in Norfolk, Virgina, at the beginning of a four-day, four-state bus tour moved quickly to position himself and Romney as champions of voters dissatisfied with the economy and to draw his own contrasts with President Barack Obama.

"We won't duck the tough issues, we will lead!," Ryan told a cheering crowd on the battleship USS Wisconsin. "We won't blame others, we will take responsibility. We won't replace our founding principles, we will reapply them."

"I hear some people say that this is just 'the new normal.' Higher unemployment, declining incomes and crushing debt is not a new normal. It's the result of misguided policies. And next January, our economy will begin a comeback with the Romney plan for a stronger middle class that will lead to more jobs and more take-home pay for working Americans."

Romney called Ryan "a faithful Catholic" who "believes in the worth and dignity of every human life." He lauded the fifth-generation Wisconsin native serving his seventh term in Congress as "an intellectual leader of the Republican Party" and a person who will help lead the country "to widespread and shared prosperity."

Romney introduced his running mate saying that his "integrity is unquestioned and his word is good."

But Romney, 65, initially flubbed his big line, announcing, "Join me in welcoming the next president of the United States, Paul Ryan!" He recovered moments later when Ryan took the stage, saying, "Every now and then, I'm known to make a mistake. I did not make a mistake with this guy, but I can tell you this: He's going to be the next vice president of the United States."

Accolades poured in from Republicans. In a statement, Senate Republican Leader Mitch McConnell called Ryan, the House budget chairman, "a confirmation that Gov. Romney is serious about strengthening America's economic future, tackling the deficits and debt that have skyrocketed under President Obama, and returning to a path to solvency and security."

Republican National Committee Chairman Reince Priebus said the new teammates "have the knowledge, expertise and vision we need to get America working again and get our fiscal house in order."

Pawlenty, in New Hampshire, called Ryan "a respected leader and a bold thinker regarding the changes needed to restore America."

But the Obama campaign reacted to the announcement making familiar charges against the architect of GOP budget plans and tried to tie him to the incumbent's predecessor, which is consistently blamed for the country's economic doldrums.

"In naming Congressman Paul Ryan, Mitt Romney has chosen a leader of the House Republicans who shares his commitment to the flawed theory that new budget-busting tax cuts for the wealthy, while placing greater burdens on the middle class and seniors, will somehow deliver a stronger economy," it said in a statement.

"The architect of the radical Republican House budget, Ryan, like Romney, proposed an additional $250,000 tax cut for millionaires, and deep cuts in education from Head Start to college aid. His plan also would end Medicare as we know it by turning it into a voucher system, shifting thousands of dollars in health care costs to seniors. As a member of Congress, Ryan rubber-stamped the reckless Bush economic policies that exploded our deficit and crashed our economy. Now the Romney-Ryan ticket would take us back by repeating the same, catastrophic mistakes."

Prior to Saturday's announcement, many Republicans who spoke to CNN -- all of them granted anonymity to speak freely without angering Romney officials in Boston -- wondered why Romney would announce the pick on a weekend when millions of potential voters are likely to be distracted by the Olympics, PGA golf, late-season baseball and the box office release of the latest Bourne thriller.