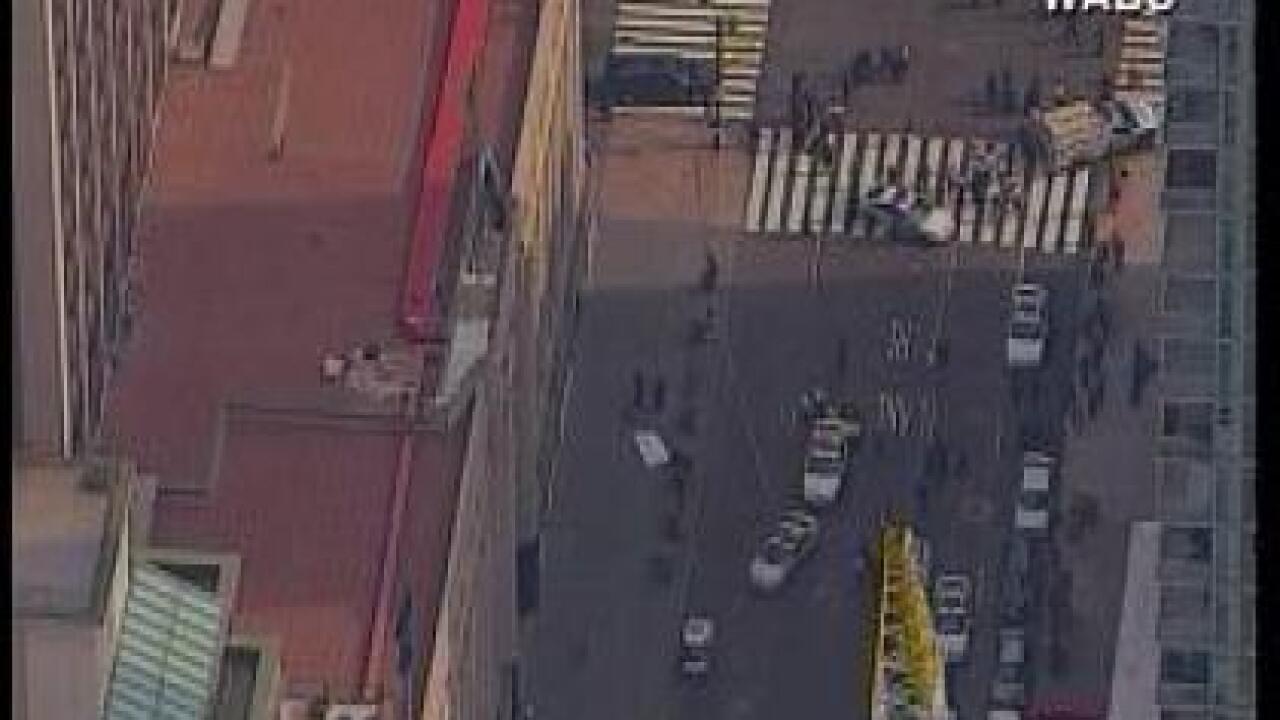 NEW YORK (CNN) -- A disgruntled former worker sparked chaos in front of the Empire State Building on Friday when he shot and killed a co-worker and engaged in a gun battle with police, leaving at least eight others wounded, authorities said.

The shooter, identified as Jeffrey Johnson, 58, was killed in an exchange of gunfire with police just as visitors began to queue up to ascend the famous New York skyscraper.

The officers fired 14 rounds after Johnson apparently turned his gun on them, according to New York Police Commissioner Ray Kelly.

Some of the wounded may have been hit in the crossfire or by ricocheting bullets, he said.

The immediate aftermath was captured on video by an Australian tourist, offering a street-level glimpse of a shooting that prompted road closures across the area.

At least two police officers can be seen in the video with their guns drawn over a man who is lying on his back. The man appears to be alive, with his hands partially outstretched.

The camera then pans to others who are apparently injured, as pedestrians duck behind buildings on Manhattan's Fifth Avenue.

Police say the gunman was apparently laid off from his job as a designer of women's accessories at Hazan Imports last year.

Clad in a business suit and carrying a briefcase during the attack, Johnson had a longstanding dispute with the victim over allegations of harassment in the workplace, police said.

Both men had filed prior complaints. But on Friday morning, police say, Johnson fatally shot the 41-year-old man.

The victim was identified as Steven Ercolino by the president of State University of New York at Oneonta, where he was a 1992 graduate.

"We were saddened to learn that a member of our Oneonta alumni community was the victim of this tragic and senseless killing," President Nancy Kleniewski said. "Our thoughts and prayers are with Steve's family."

Ercolino is listed as a vice president of sales at Hazan Import Corp., according to his LinkedIn profile.

Police have not yet identified the victim.

Authorities initially reported that nine people were wounded in the incident, but later revised that number to eight.

A construction worker followed the gunman after the initial gunshots and alerted officers.

Two policemen were being treated at a Manhattan hospital early Friday afternoon, though no injuries were considered life-threatening, according to Mayor Michael Bloomberg.

Johnson used a .45-caliber semiautomatic handgun and was carrying extra ammunition in his briefcase during the attack, according to police.

The former Manhattan resident does not appear to have had a criminal record, but authorities are still checking, Bloomberg added.

His neighbor, Gisela Casella, described him as a quiet animal lover whose death left her "shocked."

"He was the nicest guy. He must have snapped or something, I don't know."

Johnson's landlord, Guillermo Suarez, said that he lived alone and that he'd seen him leave the building Friday morning dressed in a suit around 8 a.m.

"I heard the gunshots," said Anika Basu, who was riding on a bus near the building when the exchange took place. "I looked towards the left as saw three people fall ... the whole entire crosswalk emptied and people were running."

"We didn't realize, if it was an actual gunshot or what," she said.

"It's just a crazy scene here," said Rebecca Fox, who works across the street from the Empire State Building. She said she had been getting coffee and had her headphones on when she saw people running.

Fox said she saw a woman who had been shot near a brewery, as well as blood splattered on the sidewalk.

One witness -- 22-year-old Max Kaplan -- said he heard at least nine shots and saw ambulances race to the scene.

"We're all very shaken up at the office," he said.

Aaron Herman, a CNN iReporter, painted a portrait of confusion.

"It was a little chaotic. Police had barricaded the area, and I saw one woman who was a victim, I think she had been grazed," he said. "Some said they heard around three 'pops' and ran into nearby local stores to be safe."

The White House said top aides told President Barack Obama about the shooting around 9:30 a.m. The shooting does not appear to be linked to terrorism, authorities said.

Local and federal authorities who converged on the building around 9 a.m. closed several streets around Fifth Avenue and 34th Street, snarling traffic in the heart of Manhattan.

Shortly after the incident, Manhattan's Bellevue Hospital Center reported that it was treating six victims suffering from gunshot wounds. None of the injuries was considered life-threatening.

The Empire State Building is one of the most famous skyscrapers in the world and one of New York City's best-known tourist attractions.

Each year, about 4 million people visit the building's two observation decks. At more than 1,453 feet tall, the landmark building reaches more than a quarter-mile into the sky.

"There's always a focus and concentration on the building," retired police officer Lou Palumbo said. "That building gets special attention."

The Empire State Building Co. said in a statement Friday that "the building is fully operational at this time" and that police are investigating the incident.