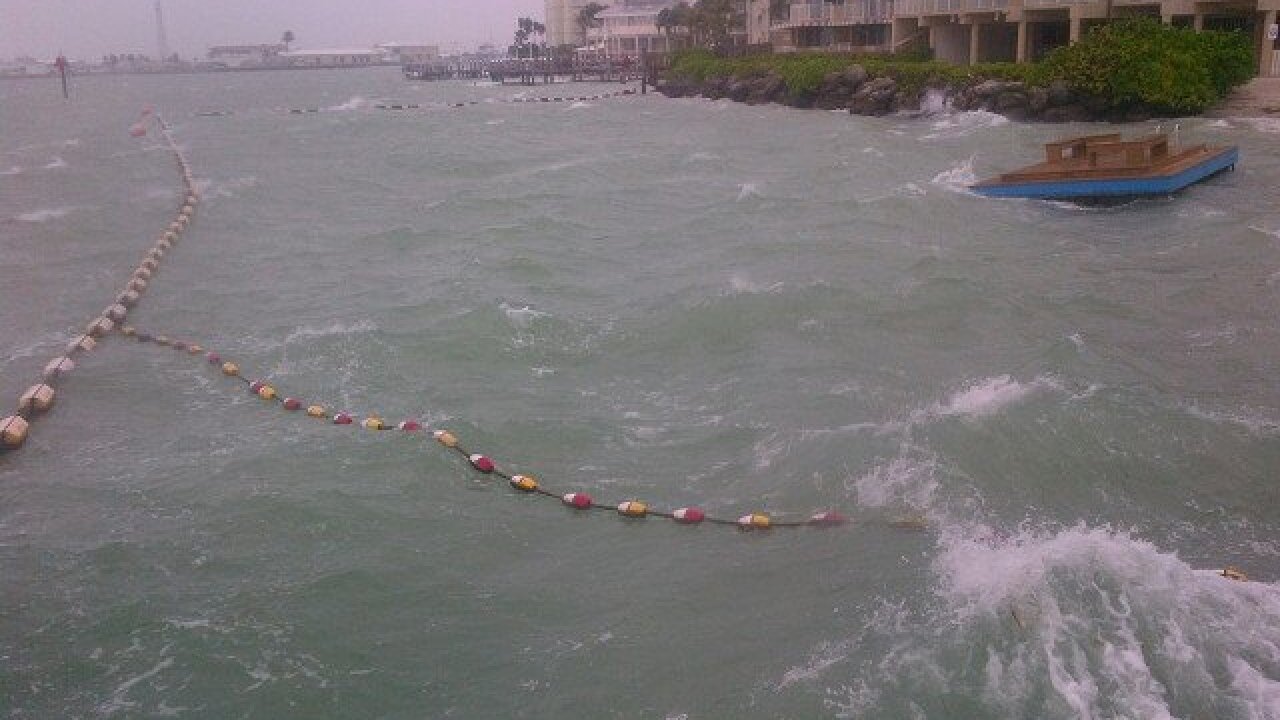 Wind and rain bands are starting to come ashore in key west on Sunday August 26, 2012.

MIAMI (CNN) — Heavy rain and strong wind from Tropical Storm Isaac pounded parts of south Florida on Sunday, but the threat to the state lessened as forecasters said the storm would move west of its originally predicted path.

Isaac, which should strengthen into a hurricane in the next day or two, is expected now to strike further west, anywhere between Florida and Louisiana. The entire area from east of Morgan City, Louisiana, to Destin on the Florida Panhandle was under a hurricane warning.

It appeared the storm would mostly bypass Florida’s west coast and the Republican National Convention in Tampa, where the schedule was pushed back a day by organizers.

“The best thing to do in a storm like this is get out of its way,” said Mississippi Gov. Phil Bryant, who urged residents to prepare for the worst.

He, along the governors of Louisiana and Alabama declared states of emergencies to help cope with the storm, which could make landfall near or on the August 29 seventh anniversary of Hurricane Katrina.

CNN iReporter Frank Guida, from Fort Lauderdale, Florida, said water gushed through the doors and flooded the lobby of his building. The rain came in waves, every half hour or so. He sent video shot from the 18th floor, showing low visibility amid stormy skies and heavy rain.

“As I look out the window now, I can see that the wind is more unified and it is more intense,” he said. “You can see everything is moving in the same direction, like the palm trees and the shrubs. I can hear shutters shaking.”

As of 8 p.m. ET Sunday, Isaac was about 60 miles southwest of Key West, Florida, and heading into the southeastern Gulf of Mexico, according to the National Hurricane Center. Packing sustained winds of 65 miles per hour, it was moving west-northwest at 15 mph.

A day after slamming Haiti, where at least six deaths were reported, Isaac slowed a little while passing through the Straits of Florida and lashing Cuba and the Florida Keys. The storm was expected to gain strength as it moves through the warm Gulf waters.

By late Monday afternoon or early evening, Isaac’s eye is forecast to be well west of Tampa. It is expected to make landfall late Tuesday or Wednesday — Katrina’s anniversary. By then it could be a Category 2 hurricane with winds of at least 96 mph.

“We are just on high alert. I know the anxiety level is high,” New Orleans Mayor Mitch Landrieu said. “The storm is somewhat uncertain. Out of an abundance of caution we will begin to take these precautions as quickly as we can.”

He said neither the airport, convention center nor Superdome would be shelters of last resort as they were in 2005.

“We are much, much better prepared structurally than before,” he said, adding, “If you are called upon, you should leave.”

CNN meteorologist Dave Hennen said there are so far some eerie similarities between Hurricane Katrina and Isaac.

The forecasts for the two storms were almost identical. “We hope that is where the comparisons end,” he said.

“Hurricane Katrina went on to become a dangerous Category 5 hurricane in the central Gulf of Mexico,” said Hennen. “Isaac is forecast to become a Category 2, 100 mph hurricane before it hits the Gulf Coast … seven years to the date of Katrina’s landfall.”

Louisiana Gov. Bobby Jindal called for voluntary evacuations in 15 parishes. A mandatory evacuation was ordered for St. Charles Parish and for the east bank of Plaquemines Parish.

Officials in Plaquemines Parish declared a state of emergency and began preparing for the storm by bolstering levees and adding additional flood protection devices to low-lying highway areas.

In Alabama, officials ordered mandatory evacuations for parts of Mobile and Baldwin counties.

Florida Gov. Rick Scott said some areas in his state had no power.

“We are experiencing some minor outages in the southern part of the state,” he said at a news conference in Tampa. He said his main concern for Tampa was no longer a direct hit from Isaac but tropical storm force winds.

Even with the change in the storm’s predicted track, GOP officials decided to push back Monday’s scheduled start of the Republican National Convention in Tampa by one day, hoping the move will make it safer and easier for delegates to attend.

Some airlines had canceled some flights between airports in south Florida. Officials at Miami-Dade Airport said 555 flights, both arrivals and departures, were canceled Sunday.

In Key West, the southernmost point in the United States, heavy rains lashed boarded-up windows. Hotels were largely vacant even though no evacuation orders had been issued. By Sunday evening, the skies had started to clear.

CNN iReporter Ally Miller, who lives about 30 miles noth of Key West, Florida, shot dramatic video of the storm, showing wind and rain whipping the top of a palm tree.

Scientists from the U.S. Geological Society were concerned that Isaac, headed towards areas hit by Tropical Storm Debby in June, will compound damage done there, especially dune and beach erosion.

The U.S. Bureau of Safety and Environmental Enforcement said Sunday that 39 production platforms and eight oil rigs in the Gulf had been evacuated already. BP said it will evacuate all oil platform workers in the Gulf on Monday.

The storm left at least six people dead when it struck the impoverished Caribbean nation on Saturday, pounding camps where hundreds of thousands of people live in tents.

The country is still recovering from a devastating earthquake that struck more than two years ago, and its challenges are compounded by the fact it is led by a relatively new government with limited resources. All that said, the top U.N. humanitarian official in the nation praised the initial response efforts.

“So far, I think we’re faring reasonably well in our response,” Kevin Kennedy said Saturday, referring to the efforts of the Haitian government, U.N. agencies and nongovernmental organizations.