Thousands being rescued as waters rise from Isaac 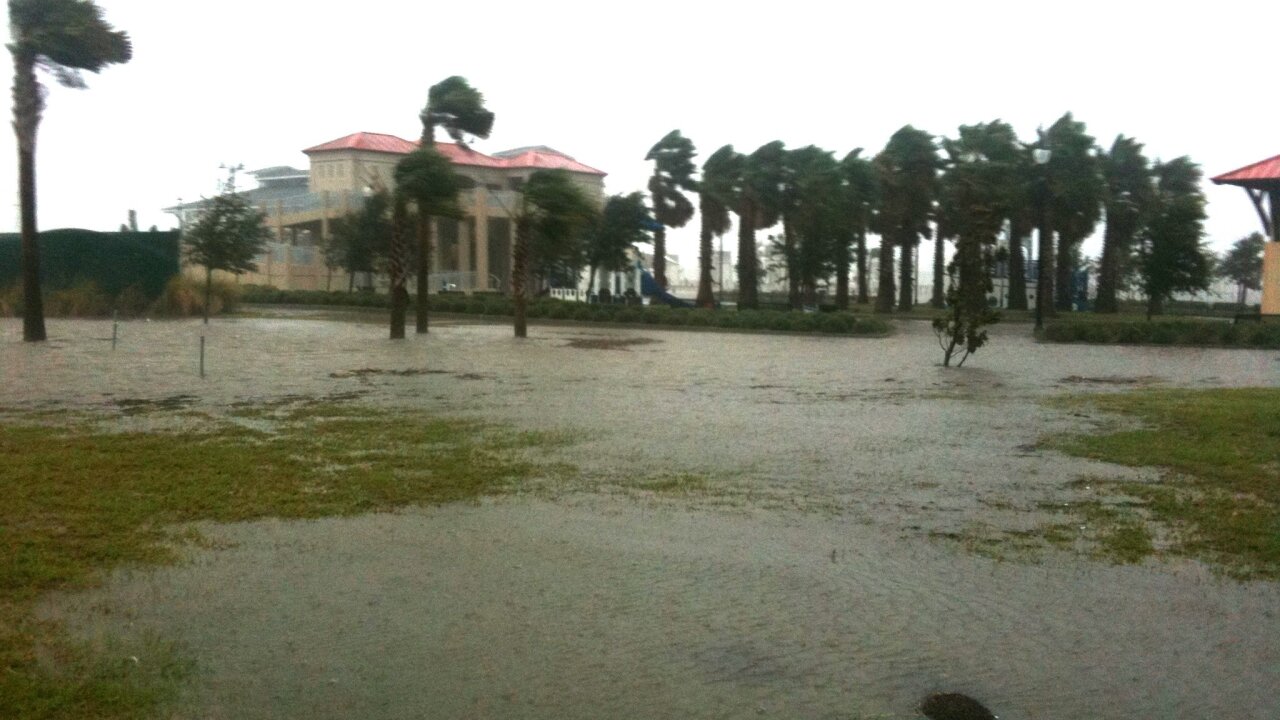 Hurricane Isaac blows in over Gulfport, Mississippi on Wednesday, August 29, 2012.

The surge was unusually bad in LaPlace, about 25 miles northwest of New Orleans, where many people had been rescued or still needed to escape rapidly rising water, said Paige Falgoust, communications director for St. John the Baptist Parish.

"We have established pickup points in certain subdivisions that are easy access for our residents to get to by foot," she said.

People were being taken to a processing center at a church then bused to state shelters outside the parish.

The storm surge from Lake Ponchartrain came quickly and "in a different way from what we were expecting," Falgoust said.

"In some areas the water levels rose in 10 minutes to where they could not get out of their homes," she said.

According to a release from Louisiana Gov. Bobby Jindal's office, 1,500 people had been evacuated with 1,500 more needing rescue. The state sent 89 buses to take evacuees to shelters.

The situation also was particularly dire in Plaquemines Parish, southeast of New Orleans, where 3,000 people remained in one area close to an 8-foot tall levee that waters are threatening, the governor's office said.

Earlier Jindal said a first estimate from local officials in the parish showed as many as 800 homes may have received significant water damage. The U.S. Army Corps of Engineers reported significant storm surge in the parish, scene of many rescues.

One involved National Guard troops who moved 112 residents from the Riverbend nursing home to another facility.

Dozens of Louisiana families that had ignored mandatory evacuation orders in a low-lying area retreated to their attics and roofs and sought rescue amid the howling wind and pounding rain.

CNN iReporter Kayla Robin, who took photos of the Braithwaite flooding and rescue arrivals, said the experience was horrific.

"When they got in, you could tell they were in shock and weren't expecting this," she told CNN.

Robin, 20, lives in Caernarvon in St. Bernard Parish, right next to Braithwaite. She lives to the east of a floodgate that protected St. Bernard from the floodwater.

Robin said there was no water in her home, although there was calf-high water in the streets.

"It was traumatic going to the wall and seeing both sides at one time," said Robin of the contrasting situations. "Thankfully, we have everything -- but these people (on the other side) are reliving Katrina seven years later."

Meanwhile, officials said there were 12 incidents of looting. New Orleans Police said arrests were made in each case, but didn't specify how many people were involved.

Mississippi Gov. Phil Bryant said Wednesday that 34 people were rescued by boat in Hancock County, on the coast northeast of New Orleans, and 15 others were picked up by National Guard troops in trucks. CNN affiliate WWL reported major flooding in LaPlace, west of New Orleans.

Isaac threatened to keep churning over the region for another day.

The punishing storm conditions will persist "all day today, into tonight, into tomorrow," said Richard Knabb, director of the National Hurricane Center.

The region's largest power provider, meanwhile, told customers to prepare for "extended power outages." Overall, power companies said more than 817,000 customers were without power in Louisiana, Mississippi, Alabama, Florida, Texas and Arkansas. More than three-fourths of the outages were in Louisiana.

Sixty road segments in Louisiana were closed as of Wednesday afternoon, officials said, including the Lake Pontchartrain Causeway.

"We are trying to keep priority routes open as much as safely possible," said spokeswoman Amber Leach of the Louisiana Department of Transportation and Development.

The storm's center was about 30 miles south of Baton Rouge and about 60 miles west of New Orleans, the hurricane agency said. Police officers said the city will be under a dusk-to-dawn curfew beginning Wednesday evening.

Isaac was creeping to the north at only 5 mph, giving it a long time to inflict damage.

Jindal said there was a report of a fatality in a fire early Wednesday, but officials had not confirmed the report.

Officials were quick to emphasize that the huge federal investments in recent years to avoid a repeat of Hurricane Katrina's horror had worked in New Orleans.

"The system that the country invested in is absolutely paying off," said Louisiana Sen. Mary Landrieu.

"There is no evidence of any (water) overtopping (canals)" in the city, said the senator's brother, New Orleans Mayor Mitch Landrieu. "We have full confidence the levees will hold."

But in Plaquemines Parish, at least four levees overtopped, creating a kind of flooding the parish did not see even during Hurricane Katrina, which hit seven years ago Wednesday.

"It's very unfortunate that people did not heed the warnings," Mary Landrieu told CNN, adding, "our hearts go out" to them.

"Now the Coast Guard's got to go out with winds still gusting 60 to 70 mph in some areas" to save them, she said.

The New Orleans levee system and pump stations were working furiously to deal with the deluge.

The system was rebuilt and reinforced at a cost of $14 billion after it failed when Katrina struck in 2005. Nearly 1,800 people died as a result of that storm, the majority when levees and flood walls failed and flooded.

Officials were considering intentionally breaching the levee downstream to allow some of the floodwater to flow back out of the inundated area, Jindal said.

Nungesser said parish officials will go out at low tide to check the back levee -- a second line of defense -- at Braithwaite and determine where to punch holes in it. It will be Saturday, at the earliest, before crews can cut the levee open, letting water flow out into the marsh.

According to The Times-Picayune, the digging might begin Thursday. Garret Graves, chair of the Coastal Protection and Restoration Authority, told the paper that the state had agreed to the plan to start digging as soon as conditions allow.

Earlier, Nungesser said his parish will need federal funds to rebuild. But first the searches continued.

"We are still looking for stranded residents," he said Wednesday evening. "We will resume a double check tomorrow on the homes on the east bank (of the Mississippi River). We're checking the west bank for anyone who may have been trapped."

Parish resident Gene Oddo told WWL that he was in his attic with his wife and 18-month-old baby girl.

He said the water was above his front door, and he did not expect it to reach the attic. But if it does, "I'm gonna have to shoot a hole in the attic to get up here on the roof."

His neighbors, including a 92-year-old man who refused to leave his home, were in a similar predicament, he said.

"People who went through Katrina are pretty nervous about storms, and large numbers of people have left," Lynn Magnuson, 58, said Tuesday in a CNN iReport.

About 1,000 National Guard troops and more than 2,900 law enforcement officers are in the city ready to address issues related to the storm, Mayor Landrieu said.

Isaac made its second landfall at about 2 a.m. CT near Port Fourchon, in southeast Louisiana 60 miles southeast of New Orleans, after slamming first into Plaquemines Parish along the coast and then wobbling back over the water near the mouth of the Mississippi River, the National Hurricane Center said in an early morning update.

In Biloxi, Mississippi, 50-year-old Alfonso Walker was keeping a close eye on the progress of the 195-mile-wide storm.

Isaac could bring 14 inches of rain across the region, and as much as 20 inches in some areas, including parts of Louisiana, Mississippi and Alabama, the hurricane center had predicted.

The center of the storm "will move farther inland over Louisiana tonight and tomorrow, and move over southern Arkansas by early Friday," the hurricane center said.

On Tuesday, Isaac made landfall as a Category 1 hurricane.