(CNN) -- Authorities warned people in a handful of towns outside of New Orleans to get out early Thursday ahead of rising water brought on by hurricane-turned-tropical storm Isaac, which dumped more than 20 inches of rain in some areas.

Residents in Washington Parish, on the Mississippi state border, were alerted that the Bogue Chitto River was expected to rise by 14 feet overnight.

To the southwest, in St. John Parish, National Guard troops looked for people stranded after thousands were forced to flee when a surge forced water over the banks of Lake Pontchartrain.

"What we're doing is we have got law enforcement and fire personnel who are going door-to-door to notify people," Tommy Thiebaud, the Washington Parish director of emergency services, told CNN early Thursday.

About 100 people who had ignored an evacuation order were rescued Wednesday in a flooded part of the parish, officials said. On Thursday, authorities from the sheriff's office and National Guard "will begin looking house to house to make sure they got everyone," said Parish President Billy Nungesser.

"We didn't have time to panic," Rafael Delgadillo of Braithwaite, Louisiana, told CNN on Thursday. He, his wife and daughter were rescued by a neighbor on Wednesday. "We were in survivor mode," he said. 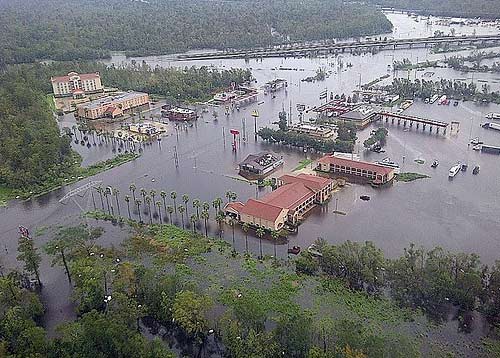 Nearly a million customers were without electricity across Arkansas, Alabama, Louisiana, and Mississippi. Utility companies reported more than 948,000 customers without power.

Water boiling advisories were being issued in a number of towns and cities along the Gulf Coast.

A flash flood emergency was issued for Slidell, Louisiana, until 9 a.m. CT. Surge flooding from Bayou Bonfouca and the W-14 canal gushed into parts of the city, and sudden inundation of up to five feet was possible in low-lying areas, the National Weather Service said.

Evacuations were under way in the city Thursday morning.

Throughout parts of the Gulf Coast, the National Weather Service warned, "life threatening hazards from storm surge and inland flooding are still occurring."

Issac is believed to have spawned three tornadoes overnight in Mississippi and Alabama, the weather service said.

Tornadoes are suspected to be behind damage in Gulfport and Jackson, Mississippi, while a twister is blamed for knocking down power lines and damaging a home in Geneva, Alabama.

Isaac made landfall as a Category 1 hurricane seven years after Hurricane Katrina swept ashore in Louisiana and Mississippi. Katrina is blamed for the deaths of 1,800 people, most in New Orleans after the levee system failed and the city flooded.

The city reported relatively minor damage from the storm, and officials said there were at least a dozen incidents of looting. New Orleans Police said arrests were made in each case, but didn't specify how many people were involved or where the arrests occurred.

"This storm took forever to get here, and now it doesn't want to leave," said Lt. Col. Jerry Sneed, deputy mayor in charge of public safety.

National Guard troops and authorities searched St. John Parish for people trapped by up to six feet of water.

By late Wednesday, about 1,500 people were evacuated from the parish, and another 1,500 were expected to leave their homes, Jindal's office said.

Dozens of buses were used to move residents out of flooded portions of the parish, while authorities worked to rescue others.

"We're continuing to rescue people from different areas throughout the parish," Paige Falgoust, communications director for St. John Parish, said early Thursday. "Our main focus right now is getting people out of their homes."

The storm surge from Lake Ponchartrain came quickly and "in a different way from what we were expecting," Falgoust said.

The surge was unusually bad in LaPlace, about 25 miles northwest of New Orleans, where many people had been rescued or still needed to escape rapidly rising water.

Dusk-to-dawn curfews were in effect from New Orleans to Baton Rouge, where authorities were urging residents to stay inside and ride out the slow moving storm.

In Plaquemines Parish, an initial estimate showed as many as 800 homes may have received significant water damage, Jindal said.

The U.S. Army Corps of Engineers reported significant storm surge in the parish, scene of many rescues. One involved National Guard troops who moved 112 residents from the Riverbend nursing home to another facility.

Officials were considering intentionally breaching the levee downstream to allow some of the floodwater to flow back out of the inundated area, Jindal said.

That could happen as early as Saturday, said Nungesser, the parish president. The Times-Picayune reported that digging could begin as early as Thursday.

Airports from Baton Rogue to Biloxi were closed until at least Thursday as the stubborn storm continued to saturate the region.

In Mississippi's Hancock County, near the Louisiana border, National Guard troops rescued dozens of people stranded by the storm surge on Wednesday.

Joey Amann thought he and his family would be safe after Isaac made landfall until he saw the fast-rising water.

At that point, he knew he had to get his family out of their home, Amann told CNN affiliate WLOX.

That's when he called for help, and the National Guard responded.