First lady to stay positive, other DNC speakers to take on GOP 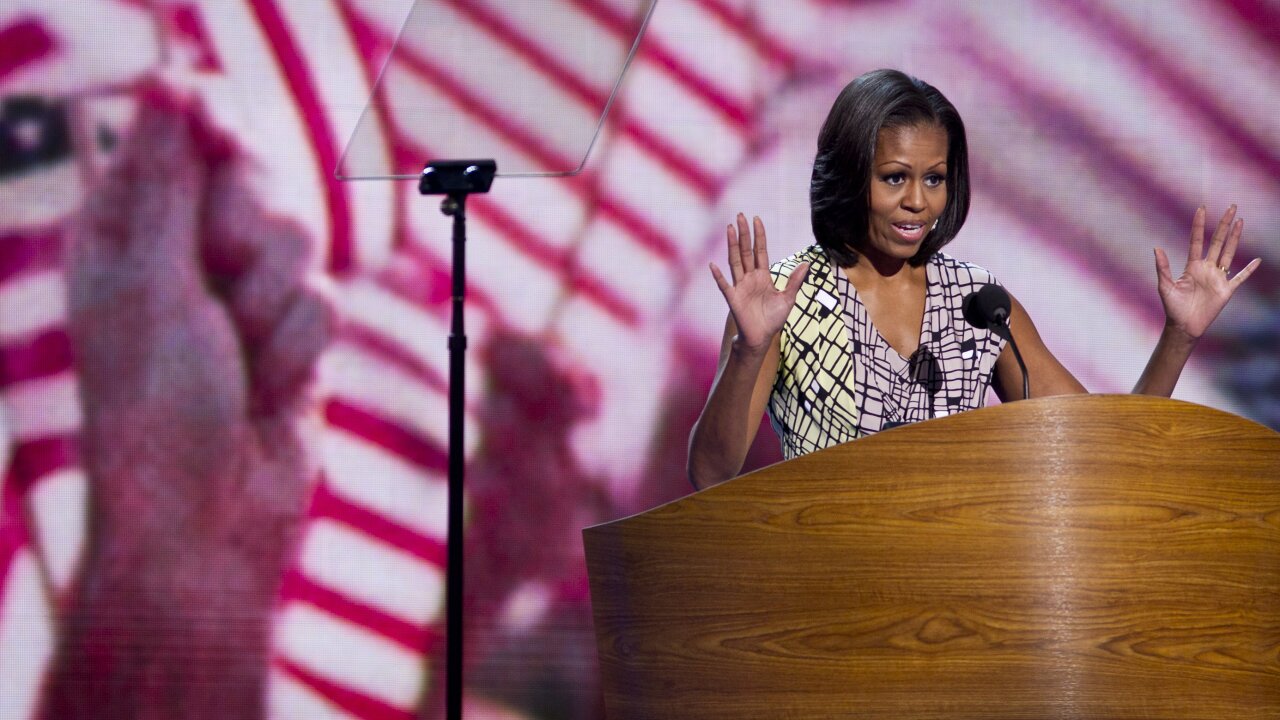 CHARLOTTE, North Carolina (CNN) -- When Michelle Obama gives her prime time speech Tuesday night at the Democratic National Convention, the first lady won't be going on the attack, according to senior officials with her husband's re-election campaign.

"There won't be contrast. The first lady has not attacked political opponents in any way over the past four years," the official said while speaking to CNN reporters covering the convention in Charlotte, North Carolina.

Describing Mrs. Obama as "the most popular political figure in America," the official said the first lady will highlight the president's personal experience and serve as a "character witness" for President Barack Obama. According to a May 30 Gallup poll, 66% of Americans have a positive view of Mrs. Obama. The figure has largely remained unchanged since her husband took office in January 2009.

Meanwhile, the keynote speaker, San Antonio Mayor Julian Castro, will also deliver what's billed as a largely optimistic address, with the aim to take a different tone from Gov. Chris Christie's keynote address at the GOP convention last week, a speech the campaign described as "angry."

While Mrs. Obama and Castro will keep their speeches positive, officials said viewers can expect to hear sharp contrasts being drawn by other top Democrats appearing on stage prior to the first lady.

"A few of the speakers tonight are going to take on the lies from the Republican convention last week head on," one of the officials said.

Several cabinet secretaries and governors, for example, will focus on specific policies the campaign said were politically difficult decisions for the president to make. Health and Human Services Secretary Kathleen Sebelius will talk about the Affordable Care Act, while former assistant secretary of Veterans Affairs Tammy Duckworth will emphasize the president's work with veterans issues. Duckworth, with strong Democratic support on the national level, is also running for a competitive House seat in Illinois against incumbent Rep. Joe Walsh.

Former Gov. Ted Strickland of Ohio, who was defeated in the tea party wave of 2010, is slated to address Obama's decision to run with the auto bailout. The Buckeye State represents a crucial battleground this fall and plays a large role in the American auto industry. Meanwhile, Gov. Pat Quinn of Illinois will address recent welfare attacks from Mitt Romney's campaign.

Also on the docket Tuesday night is Chicago Mayor Rahm Emanuel, who served as chief of staff for Obama and former President Bill Clinton. He "knows that every decision that reaches the Oval Office is a tough one, that easy decisions are handled at a staff level," one official said, adding that the Chicago mayor will focus on Obama's decision-making process.

Actor Kal Penn, who moved from Hollywood to work as an associate director in White House, will also give remarks. "Nobody has done more to encourage young voters over the past four years," one official said.

The namesake who inspired the Lilly Ledbetter Fair Pay Act will appear on stage to talk about equal pay, according to the campaign officials, who noted the act was the first piece of legislation the president signed into law.

Also featured Tuesday night will be Gov. Martin O'Malley of Maryland, a top surrogate for the president and someone the campaign regards as a "rising star and great public speaker." Most recently, O'Malley found himself facing backlash after he replied "no" when asked during a Sunday interview if the country was better off now than it was four years ago.

The campaign said all the speeches will reflect three themes: drawing a contrast between a candidate who will "move this country forward" and one who will embrace "failed policies of the past; showing "strong leadership" demonstrated by the president through the decisions he made; and laying out a "path forward" through specific policies.

"We have one goal for the convention with all the speakers, which is at the end of the week we will have answered questions about how we create good, paying sustainable jobs for middle class," the official said.

With weather forecasts predicting a chance of rain on Thursday, campaign officials said they plan to go ahead with the president's outdoor speech at the Bank of America stadium whether it's "rain or shine."

"There are too many organizational benefits to being outside. The fact that we've already given away 65,000 tickets is probably good reason to have" it at the stadium, the official said.