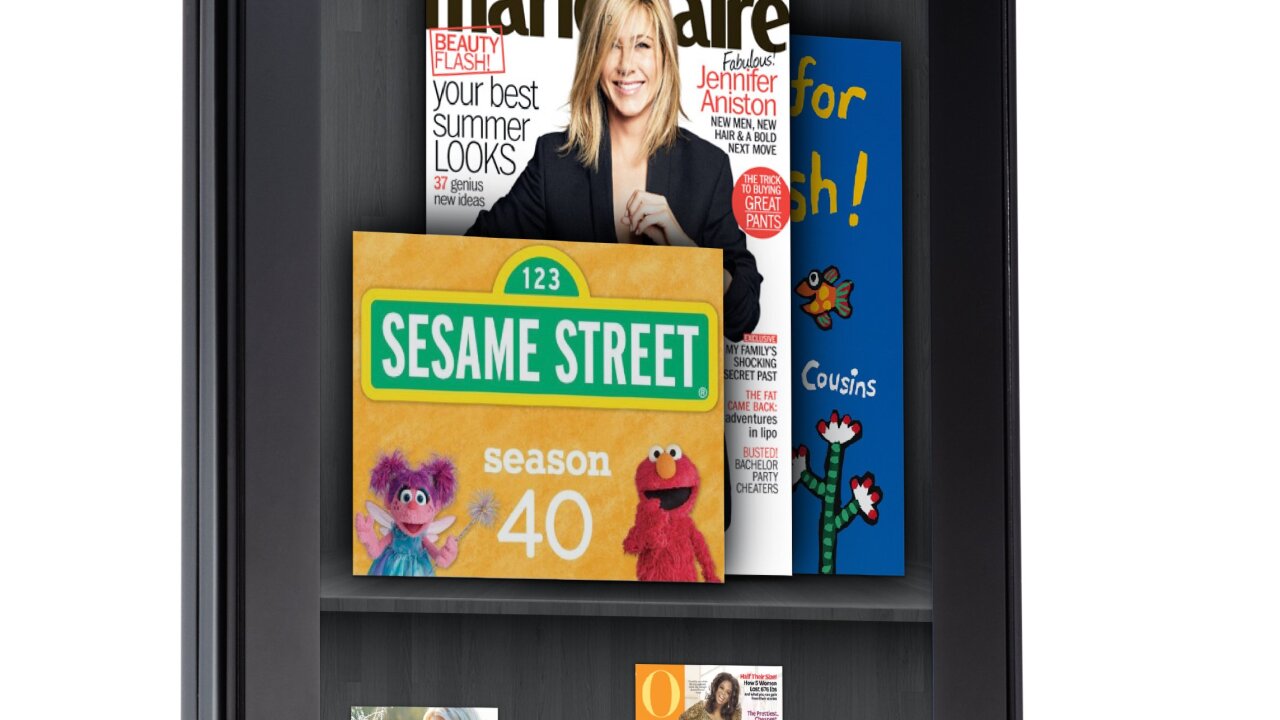 SANTA MONICA, California (CNN) — A new, high-definition Kindle with a lighting system and a bigger Kindle Fire tablet topped the list of gadgets rolled out by Amazon on Thursday at a splashy event in an aircraft hangar.

“We love to invent. We love to pioneer. We even like going down alleys that turn out to be blind alleys,” CEO Jeff Bezos told reporters and other guests. “Every once in a while those blind alleys turn into broad avenues. And that turns out to be lots of fun.”

The Kindle Paperwhite e-reader will feature 62 percent more pixels than the Kindle Touch, Bezos said. It will have a touchscreen and be lit with a fiber-optic lighting system that has been in development for four years, he said.

Bezos predicted users will “leave the light on all the time” and said the device will have eight weeks of battery life, even with its light on.

It’s slightly thinner than the Kindle Touch and, at 7.6 ounces, the same weight.

A new feature called Time to Read will estimate, based on the reader’s speed turning pages, how long it will take to finish the current chapter or the entire book.

The Wi-Fi-only version will cost $119 and 3G versions will be $179. The WiFi-only model is $20 less than Barnes & Noble’s rival Nook Glowlight, priced at $139. Pre-orders began Thursday and the device ships on October 1.

The original style, non-touchscreen Kindle also will remain available, with its price dropping to $69 for the ad-supported version.

Bezos also rolled out new Kindle Fires: a new version of the current tablet, which he says is 40 percent faster and has a longer battery life; and two sizes of a fancier Kindle Fire HD.

The Fire HDs will have either a 7-inch or an 8.9-inch screen. The big one is nearly two inches bigger than the current Fire’s 7-inch display and slightly smaller than the iPad’s 9.7-inch screen.

The Fire HD, which will continue to run a modified version of Google’s Android operating system, features dual stereo speakers with Dolby Digital Plus and two antennas, which Bezos said will lead to better connections.

It will feature new gaming tools, including an app that lets parents limit the amount of time their kids can spend playing. They’ll have Bluetooth connectivity and an HDMI port.

The updated Kindle Fire will sell for $159 and ship on September 14.

And as a parting note reminiscent of late Apple CEO Steve Jobs’ “one more thing,” Bezos announced that they’ll be offering a 32GB version of the 8.9-inch Fire with 4G LTE connectivity.

Amazon’s event is just one of many product announcements this month from electronics companies hoping to build hype ahead of the holidays. Nokia and Motorola announced new smartphones on Wednesday, and HTC is planning an event for September 19. The tech companies also are battling to make an impression in the shadow of Apple’s big press conference next Wednesday, which is most likely for the newest iPhone.

Rumors and leaks had been plentiful ahead of the Amazon event, with all signs pointing to an array of new Kindles. The Kindle Touch and Kindle Touch 3G were recently listed as “Currently Unavailable” on Amazon.com, and last Thursday the Internet retailer claimed the $199 Kindle Fire had sold out, nine months after it went on sale.

Bezos has called the original Kindle Fire Amazon’s most successful product launch and, in a press release last week, said it accounts for 22% of tablet sales in the United States.

The company has not released any sales numbers for the device to support this statistic, but research firm IDC says the company had 4.8% of the global market share in the second quarter this year. Since the Kindle Fire is only sold in the States, that percentage is likely higher in this country.

The 7-inch Kindle Fire debuted a year ago at $199. It was met with lukewarm reviews but was still a hit with consumers looking for an affordable alternative to the $499-and-up iPad. Early complaints focused on many small design issues, such as the lack of external volume buttons, no video output and a poorly placed power button. Performance was also a problem, with sluggish Web browsing and video playback speeds.

Meanwhile, the tablet market is filling up with options from major manufacturers. At the moment, it’s still dominated by Apple, which released a refreshed iPad in March and had a 62% global tablet market share in the second quarter. The company is expected to announce a new, smaller version of the iPad in October.

Other new tablets include Microsoft’s Surface tablet, running the new Windows 8 operating system, which will go on sale October 26. Google released its own 7-inch tablet this summer, the $199 Nexus 7, and is pushing it hard, even giving it a coveted ad spot on the Google.com homepage. They join Samsung’s Galaxy line as well as the Barnes & Noble Nook and BlackBerry PlayBook, both $199.

While all tablets have differences in hardware design, performance and price, a bigger factor may turn out to be access to music, books, movies and television shows.

Amazon has a head start in this department. This week, the company announced a new partnership with Epix, which will bring blockbusters such as “The Avengers” to Amazon Prime, the company’s $79-a-year instant-streaming service.