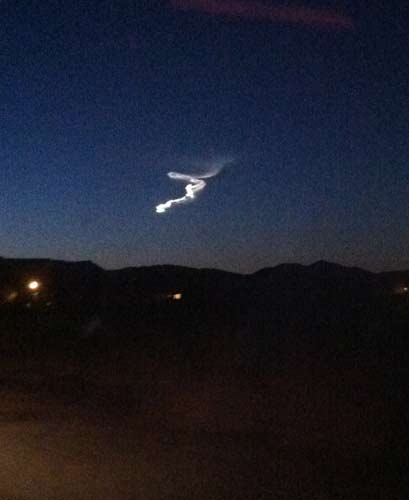 At about 6:30 a.m. Thursday, many people around Utah reported spotting a zigzagging cloud and light formation. The formation was seen through Southern Utah all the way to Phoenix and Las Vegas.

The formation was caused by a successful missile launch at the White Sands Missile Range in New Mexico, which is part of the Army Test and vEaluation Command.

“All atmospheric, its nothing that we did with the contrail,” said Cammy Montoya, public affairs specialist for White Sand Missile Range. “All atmospheric in the way that the contrail was reflected created those colors and the shape with the wind and the high altitude and that’s why folks are seeing it from so far away.”

According to a press release, this is the 14th time a large ballistic target missile has been fired from Fort Wingate since 1998.

Range personal worked with the FAA and other authorities to ensure that the test was conducted safety, according to the release.