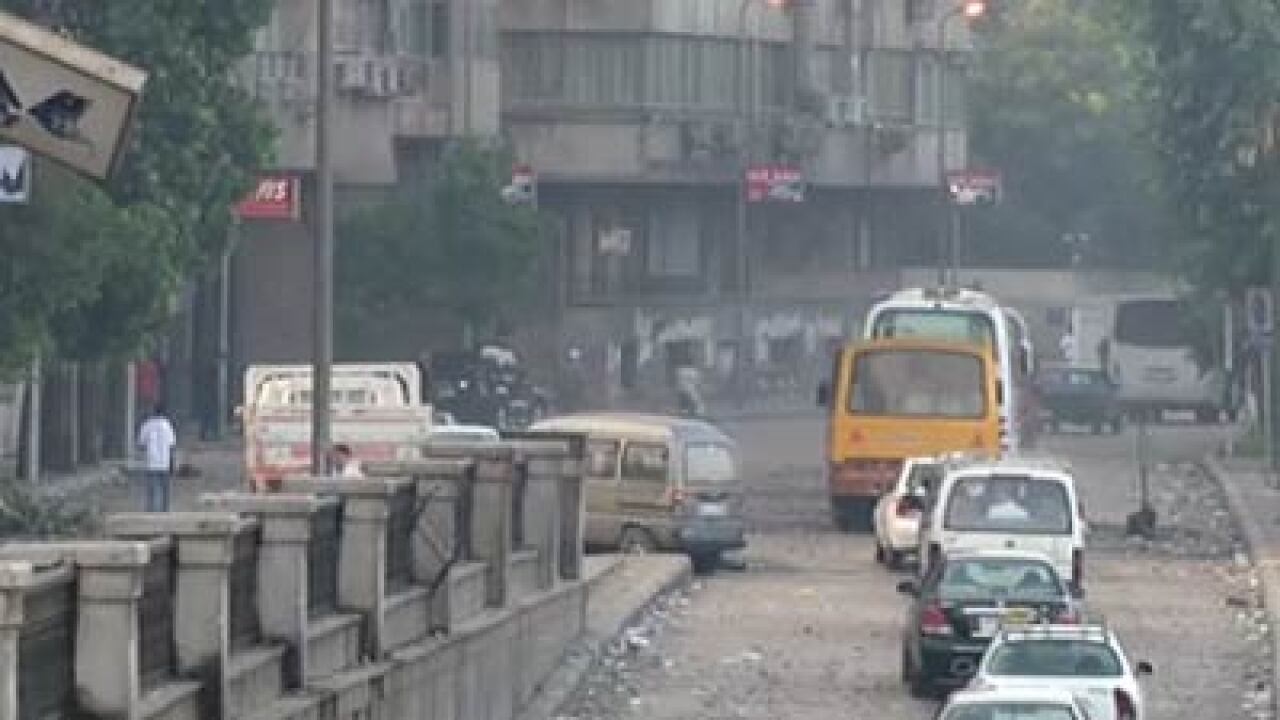 (CNN) — Demonstrators angry over an anti-Islam film clashed with police in Australia, but downtown Cairo, scene of the first protests, and most of the Muslim world appeared to be largely calm Saturday evening.

Egyptian security forces earlier Saturday pushed protesters away from the U.S. Embassy toward Tahrir Square, where they were further dispersed.

Hundreds of Egyptian riot police remained in the square as workers cleaned streets and businesses and assessed damage from five days of protests.

The demonstration in Sydney came as the United States strengthened security at diplomatic stations amid the unrest.

Carrying signs that read: “Obama, Obama, we like Osama” and “Behead All Those Who Insult the Prophet,” hundreds of protesters gathered on the steps of the U.S. consulate in Sydney.

The demonstration turned violent after protesters were pushed away from the building.

In his weekly address, U.S. President Barack Obama acknowledged “images on our televisions are disturbing.”

“But let us never forget that for every angry mob, there are millions who yearn for the freedom and dignity and hope that our flag represents,” Obama said.

The president reiterated that those who killed U.S. Ambassador to Libya Chris Stevens and three other Americans at the U.S. Consulate in Benghazi will be brought to justice.

“These four Americans represented the very best of our country,” Obama said.

FBI investigators probing the killings have put off a visit to Libya until conditions are safer. Agents had hoped to arrive in the North African nation Saturday, federal law enforcement officials said. Libyan authorities said they are cooperating with the U.S. investigation.

Libyan officials believe Tuesday’s assault in Benghazi was planned and used the protest over the film as a diversion. Yet White House spokesman Jay Carney said Friday that U.S. authorities have “no actionable intelligence” indicating the attack “was planned or imminent.”

From Morocco to Malaysia, thousands of Muslims have taken to the streets in recent days — with sometimes deadly results — over the release of a 14-minute film trailer, privately produced in the United States, that mocks the Prophet Mohammed as a womanizer, child molester and ruthless killer.

The protests peaked on Friday after prayers.

Top Western diplomats, such as European Union foreign affairs chief Catherine Ashton, have warned leaders in countries where unrest has been most pronounced to protect their missions and people.

U.S. Marines were dispatched to Libya and Yemen to safeguard American diplomatic posts, according to U.S. officials.

Marines that were to travel to Sudan returned pending further talks with the government there, a U.S. official said. State Department spokeswoman Victoria Nuland said Saturday that Washington has requested “additional security precautions” in Sudan, whose government “has recommitted itself both publicly and privately to continue to protect our (diplomatic) mission.”

Secretary of State Hillary Clinton warned Friday the United States would act to protect its diplomatic facilities if the countries in question did not stop the violence and seek justice for attacks.

“Reasonable people and responsible leaders in these countries need to do everything they can to restore security and hold accountable those behind these violent acts,” she said Friday. “And we will … keep taking steps to protect our personnel around the world.”

Despite firm condemnations by U.S. government officials, some in the Muslim world — especially those raised in regimes in which the government must authorize any film production — cannot understand, or accept, a movie like “Innocence of Muslims” can be produced without being sanctioned by Washington, said Council of Foreign Relations scholar Ed Husain.

The demonstrations, notably, haven’t all been violent, and protesters represent only a fraction of their respective nations’ populations. A few thousand, for example, clashed with security forces outside the U.S. Embassy in Cairo, a city of more than 18 million people.

Here’s a breakdown of other events Saturday around the globe:

— In Egypt’s northern Sinai Peninsula, a large number of security forces backed by tanks regained control of a base housing an international peacekeeping force that was breached Friday by Islamist militants, state-run EGYnews reported.

Carrying automatic weapons, militants burned trucks and a watch tower on the base. The armed clashes injured at least four troops and an Islamist Bedouin.

The 1,500-troop mission has patrolled the area since Egypt and Israel signed a peace treaty in 1979.

Egyptian security forces, including the military, have been fighting militants in Sinai since August after 16 border guards died in an attack by Islamist militants.

— In Afghanistan, the Taliban claimed responsibility for an attack on a joint U.S.-British base in Helmand province that left two U.S. troops dead, saying the attack was in response to the film. The attack follows a call by the Taliban on its fighters to take revenge for the film by increasing assaults on NATO troops.

— In Tunisia, authorities warned Saturday the death toll may climb following Friday’s attack on the U.S. Embassy in Tunis that left two dead.

“This initial toll might get worse as two of the wounded people are in critical condition,” the state-run TAP news agency reported.

— In Sudan’s capital, Khartoum, the German and British embassies shored up their security after protesters managed to get inside a compound that is shared by both diplomatic missions, according to the foreign ministers of both nations.

Warnings about the online movie

Days before violent protests Tuesday in Egypt, the U.S. Embassy in Cairo was warned by the U.S. intelligence community of concerns about the anti-Islam film that sparked the uproar, a U.S. official told CNN on condition of anonymity.

The cable sent to the embassy did not mention a specific threat. It only warned about the existence of the online movie and fact it was gaining attention.

U.S. authorities have discounted as false claims to news outlets that the filmmaker was an Israeli who made the movie with financing from more than 100 Jewish donors. Israel’s government denies that the film’s maker is Israeli.

The filmmaker, identified as Nakoula Basseley Nakoula, was interviewed early Saturday by a federal probation officer. The questioning comes hours after federal officials said they were reviewing his probation in connection with a 2010 bank fraud conviction.

“He is gone and he is free,” Whitmore said of Nakoula, who was bundled up in a coat, hat and white scarf when he was escorted from his house to the interview.

Whitmore dismissed reports that Nakoula had been arrested, saying he was never in handcuffs and left his house willingly to be interviewed.

The Council on American-Islamic Relations, meanwhile, said Saturday it had released a video appeal to film protesters.

A message in Arabic tells viewers in the Middle East that “ordinary Americans and the U.S. government should not be blamed for the religious hatred expressed in the film,” the group said in a statement.