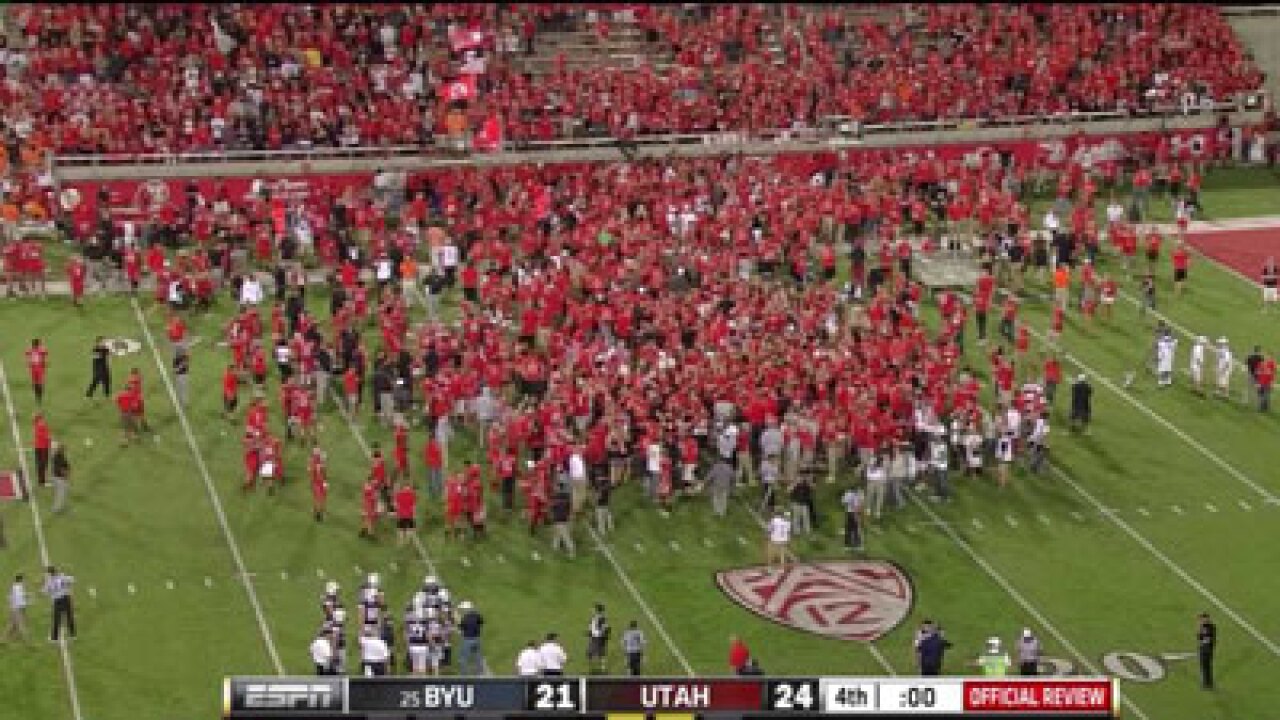 The Cougars (2-1) were backed up to their own 8 to start a drive with just over a minute left. On 4th-and-12, Cody Hoffman got behind the defense and caught a 47-yard pass down the right sideline to the Utah (2-1) 34.

Quarterback Riley Nelson killed the clock and then threw incomplete to the left side. Fans rushed the field, but Nelson held up his finger pleading that one second remained.

After a video review, BYU got its wish, and Justin Sorensen was called upon to attempt a 51-yard field goal, which was blocked. But fans again stormed the field before the play was over.

Officials huddled and penalized Utah 15 yards for a live ball foul, resulting in one untimed play.

“We should be 4-1 because we won this game three times,” Utah coach Kyle Whittingham said. “I couldn’t be more proud of our team tonight. We were tough, resilient, and bounced back from a tough loss last week and played with grit and determination.”

Moe Lee returned a fumble 47 yards for a score during a big third quarter for the Utes, who also received a pair of passing touchdowns from Jon Hays.

Nelson had a pair of scoring tosses for the Cougars, who also got 120 yards receiving from Hoffman.

“Our team didn’t play clean enough football today to win the game,” BYU coach Bronco Mendenhall said. “I really liked their heart, how they fought back, how they played until the last second and gave us a great chance right until the very last play. But, (we made) too many mistakes from the beginning of the game through (the end) to have a clean enough victory, and Utah capitalized on them to their credit.”

Hays hit Westlee Tonga for a 17-yard TD in the first quarter, but Hoffman caught a 10-yard TD pass for the only score of the second.

An interception by Ryan Lacy led the Utes to a 10-7 lead, as Petersen booted a 48-yard field goal midway through the third.

Jamaal Williams scored on a 7-yard run and Nelson found Kaneakua Friel for a 1-yard score in the fourth.

Hays went 18-of-27 fro 196 yards, while Nelson finished 17-of-35 for 206 … Utah has won eight of the last 11 games against BYU, including the last three contests … Michael Alisa led BYU with 56 yards rushing, while Jarrell Oliver topped Utah with 24 on 11 carries … Reggie Dunn had 56 yards on six receptions for the Utes.