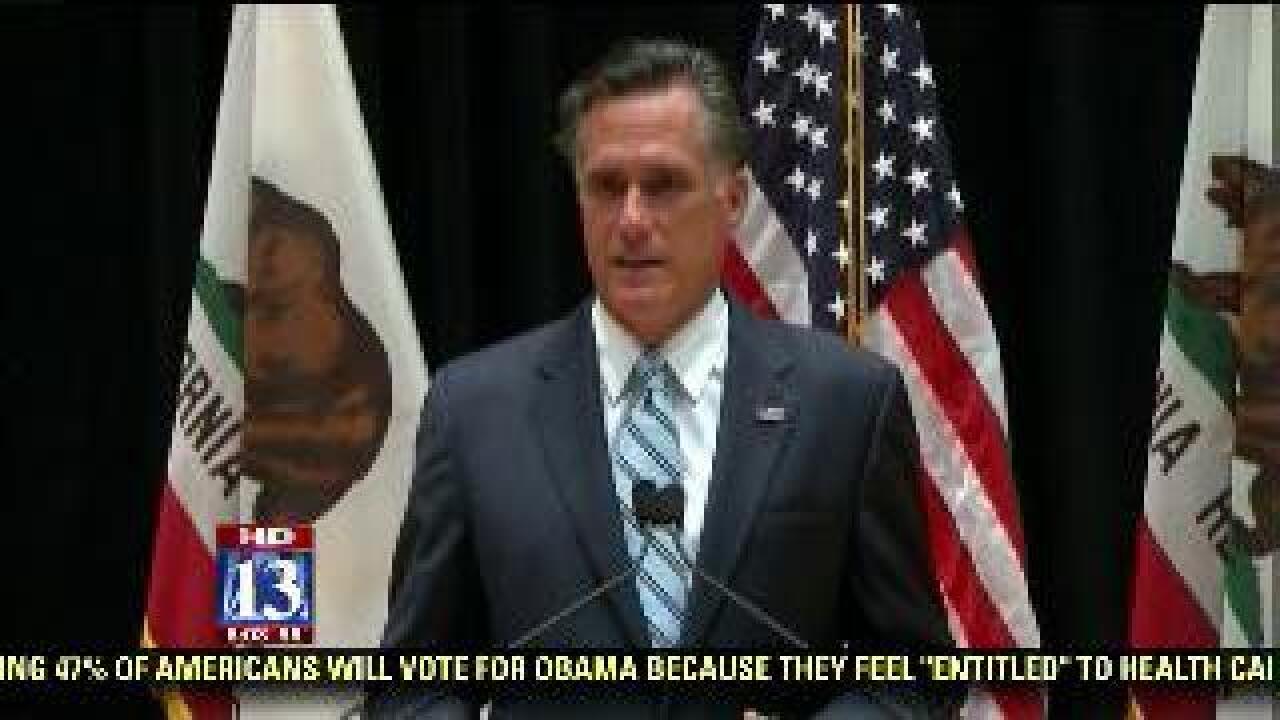 (CNN) -- Mitt Romney on Monday said his controversial statements caught on tape were "off the cuff" and "not elegantly stated," but he defended the main message of his remarks.

Romney took three questions in a brief press conference with pool reporters late Monday night in California, scheduled at the last minute in response to the release of secretly recorded video of the candidate speaking at a private fund-raiser in May.

In the footage, taped with a hidden camera, Romney argued nearly half of Americans will vote for President Barack Obama because they rely on government support, made apparent jokes about wishing he had Latino heritage, and talks about a Chinese factory his former firm purchased.

The non-partisan Tax Policy Center estimates that for tax year 2011, 46% of households will end up owing nothing in federal income taxes. But if payroll taxes are counted, the number of non-payer households drops precipitously - to an estimated 18% in 2011.

Adding to his argument about entitlement, Romney said his "job is not to worry about those people."

"I'll never convince them they should take personal responsibility and care for their lives," he added. "What I have to do is convince the 5 percent to 10 percent in the center that are independents, that are thoughtful."

The videos were posted Monday afternoon on the left-leaning news websites The Huffington Post and Mother Jones. The person responsible for the footage said he or she wishes to remain anonymous for "professional reasons and to avoid a lawsuit," according to the Huffington Post. Furthermore, the video was altered dramatically - but retains the audio from the event - to mask the location and date of the fund-raiser with high-dollar donors.

Romney, in his press conference Monday night, said he could have stated his original comments "more clearly" but said he was trying to point out the differences between the two campaigns.

"We have a very different approach - the president and I - between a government-dominated society and a society driven by free people pursuing their dreams," Romney said.

As for why he spoke more candidly with the group of donors, Romney said he was addressing some concerns at the fund-raiser.

"At a fundraiser you have people say, 'Governor how are you going to win this?' And so I respond 'Well, the president has his group, I have my group. I want to keep my team strong and motivated and I want to get those people in the middle.' That's something which fund-raising people who are parting with their monies are very interested in," Romney said.

He also called on the unidentified individual to release the entire video, rather than "snippets."

Shortly after reports began to surface about the video, campaign spokesman Rick Gorka said the campaign will allow pool reporters to film fund-raisers in private homes beginning Tuesday. Previously, reporters were allowed into some of the events but were not permitted to use cameras.

When the campaign released a statement in response to the issue later Monday, it did not directly mention the videos.

"Mitt Romney wants to help all Americans struggling in the Obama economy. As the governor has made clear all year, he is concerned about the growing number of people who are dependent on the federal government, including the record number of people who are on food stamps, nearly one in six Americans in poverty, and the 23 million Americans who are struggling to find work. Mitt Romney's plan creates 12 million new jobs in four years, grows the economy and moves Americans off of government dependency and into jobs," Gail Gitcho, Romney's communications director, said in the statement.

"The point of all of this is that the size of government is too big, and if we don't do something about it we're going to really lose the very idea of America," Priebus said on CNN's "The Situation Room."

He added: "I don't have the numbers in front of me but clearly what we do have, very clearly, is a government and a society here in this country that is becoming dependent."

Also at the event, Romney joked he would be more successful in his White House bid if his father were actually Latino, rather than having been born in Mexico to missionary parents from the United States.

"My dad, as you probably, know was the governor of Michigan and was the head of a car company. But he was born in Mexico ... and, uh, had he been born of, uh, Mexican parents, I'd have a better shot at winning this," Romney said. "But he was unfortunately born to Americans living in Mexico.... I mean I say that jokingly, but it would be helpful to be Latino."

The tape came the same day as Romney addressed the Hispanic Chamber of Commerce in Los Angeles as he continues to court Latino voters, which have largely signaled they would fall in Obama's column in November. According to a recent Gallup poll, Obama leads Romney among Latino registered voters 64%-27%.

"It's shocking that a candidate for President of the United States would go behind closed doors and declare to a group of wealthy donors that half the American people view themselves as 'victims,' entitled to handouts, and are unwilling to take 'personal responsibility' for their lives. It's hard to serve as president for all Americans when you've disdainfully written off half the nation," said Obama campaign manager Jim Messina in a statement.

In another part of the video, Romney says he was visiting a Chinese factory during his tenure as chief executive of Bain Capital, a private equity firm.

"When I was back in my private equity days, we went to China to buy a factory there," Romney is heard saying. "It employed about 20,000 people. And they were almost all young women between the ages of about 18 and 22 or 23. They were saving for potentially becoming married."

The GOP nominee goes on to detail the conditions he saw, including workers squeezed into dormitory-style housing, and a fence topped by barbed wire circling the factory.

Romney says when he asked the factory's bosses about the fence, they told him it was meant to keep people out, rather than in, as people were clamoring to come and work at the plant, which Romney said was manufacturing small appliances.

Romney concludes his story by recalling words from a fellow employee of Bain.

"The Bain partner I was with turned to me and said, you know, 95 percent of life is settled if you are born in America," Romney is heard saying on the tape.

A source familiar with Bain's investment history says the firm itself did not buy the factory referred in the video, but could not say whether the factory was owned by a company in which Bain later invested. The Boston Globe reported in 1998 that a Bain subsidiary, Brookside Capital Partners Fund, had invested in a Global Tech, a company with factories in China.

Romney, in a statement, called the trade complaint "too little, too late," asserting the president's "credibility on this issue has long since vanished."

Obama, himself, was caught in a secret camera moment in 2008, when he was recorded at a private fund-raiser saying that some voters "cling to their guns and religion." At the time, Republicans quickly pounced on the comment and now Romney's running mate, Rep. Paul Ryan, uses the quote against the president on the campaign trail.

"This Catholic deer hunter is guilty as charged and proud to say so," Ryan said Monday at a campaign event in Iowa. "That's just weird. Who says things like that? That's just strange."