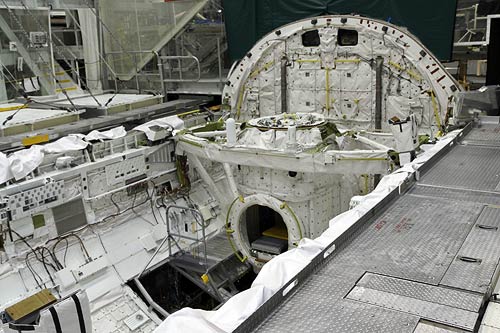 (CNN) — The space shuttle Endeavour began its final aerial show on Wednesday, thrilling spectators across the southern United States before completing the first stage of its transcontinental voyage in Houston.

After a two-day delay due to unfavorable weather, Endeavour began its flight from Kennedy Space Center in Florida to Los Angeles, where the now-retired spacecraft will be displayed.

Endeavour, along with Discovery, Enterprise and Atlantis, became a museum piece after NASA ended its 30-year shuttle program in July 2011.

Two other shuttles — Challenger and Columbia — were destroyed in accidents that killed all aboard. Challenger exploded shortly after launch in 1986, and Columbia broke apart upon re-entry into Earth’s atmosphere in 2003.

Endeavour’s three-day piggyback flight atop a modified jumbo jet is divided into three legs that could be described as scenic routes to showcase the shuttle to the public.

NASA expects Endeavour to draw crowds of onlookers as the Boeing 747 plots a course over space centers in at least five states and makes stops along the way.

The flying duo will dip to about 1,500 feet at many points, to afford a better view to spectators on the ground.

As Endeavour bid farewell to Kennedy Space Center, it elicited strong emotions from people, such as CNN iReporter Randy Lathrop of Cocoa, Florida, who have lived with the shuttle program nearby for decades.

“It’s the last time that she’ll ever be at her home base again. It strikes a chord of nostalgia in you because she’s done so many flights from the space center. This is her home,” he said.

NASA says that on Thursday, Endeavour is scheduled to depart Houston at dawn and then make a make a fueling stop at Biggs Army Air Field in El Paso before proceeding to Dryden Flight Research Center at Edwards Air Force Base in California.

On Friday, Endeavour will embark on a tour of Northern California, dipping over NASA’s Ames Research Center, Sacramento and San Francisco before heading back to Los Angeles, where it will become an exhibit at the California Science Center.

Named for the first ship commanded by British explorer James Cook, Endeavour rolled off the assembly plant in Palmdale, California, in 1991 at a cost of $1.7 billion. It was the baby of the shuttle fleet, built as a replacement for Challenger.

Over the next 20 years, Endeavour flew some of the most high-profile shuttle missions, covering 25 flights and nearly 123 million miles. It flew a Spacelab mission and numerous International Space Station assembly missions and rendezvoused with Russia’s Mir Space Station.