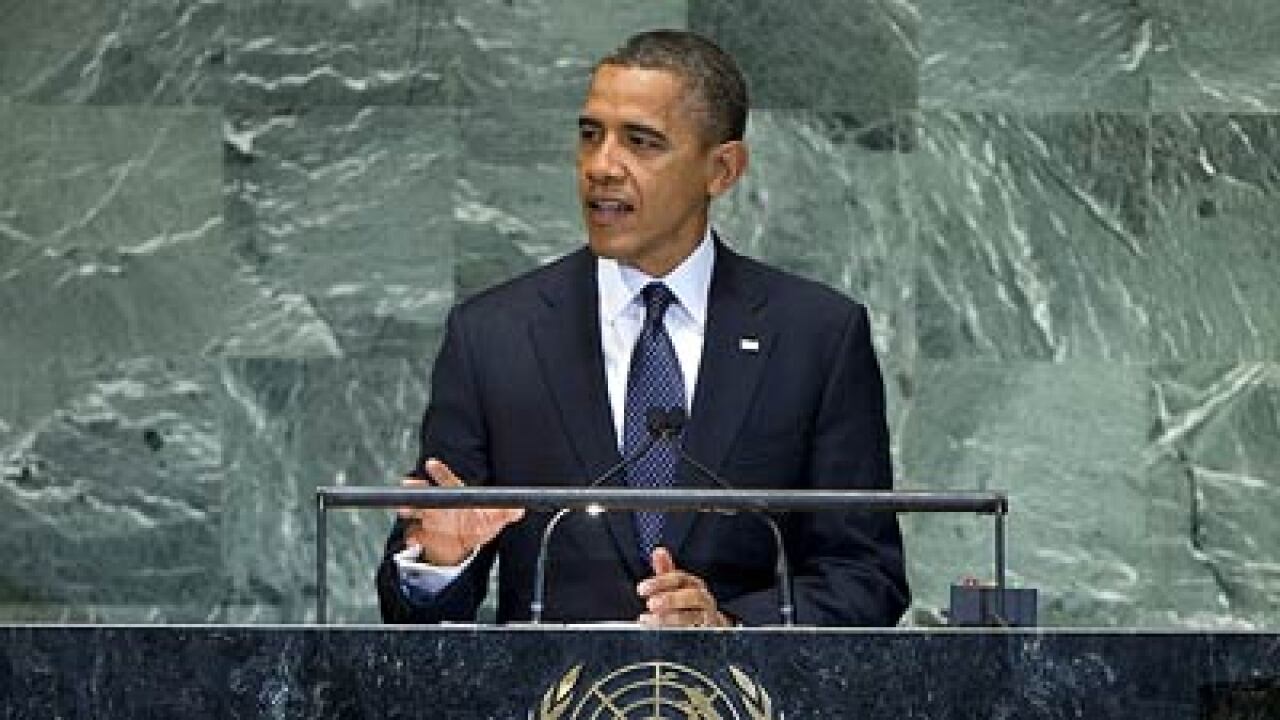 “We were inspired by the Tunisian protests that toppled a dictator, because we recognized our own beliefs in the aspirations of men and women who took to the streets,” he told delegates. “We insisted on change in Egypt, because our support for democracy put us on the side of the people.”

Obama also sought to highlight American support of leadership transitions in Yemen, “because the interests of the people were not being served by a corrupt status quo,” and in Libya, where a U.N. Security Council resolution allowed NATO jets to help “to stop the slaughter of innocents.”

But in what is expected to be among the main topics of this week’s meeting of world leaders, Obama declared that the regime of Syrian President Bashar al-Assad must come to an end, and said he will support “sanctions and consequences” in the absence of that transition.

He also blasted Iran, whose president on Monday declared Israel has “no roots in the Middle East,” blaming it for “propping up a dictatorship in Damascus” and supporting terrorist groups abroad.

Obama said that while the United States remains committed to a diplomatic solution on Iran’s nuclear program, “time is not unlimited.”

The consequences of a nuclear-armed Iran are immense, Obama told delegates.

“It would threaten the elimination of Israel, the security of Gulf nations, and the stability of the global economy. It risks triggering a nuclear-arms race in the region, and the unraveling of the non-proliferation treaty,” Obama said.

In an interview on CNN’s “Piers Morgan Tonight” on Monday, Iranian President Mahmoud Ahmadinejad appeared to say he would not be surprised if Israel attacks Iran over its nuclear program.

“Of course, the Zionists are very much — very adventuresome, very much seeking to fabricate things,” Ahmadinejad said, referring to Israel. “And I think they see themselves at the end of the line. And I do firmly believe that they seek to create the opportunities for themselves and their adventurous behaviors.”

Obama also addressed the uproar across the Muslim world over “The Innocence of Muslims,” a movie produced in the United States that mocked the Muslim Prophet Mohammed.

While Obama spoke before an international audience, his speech on Tuesday largely targeted a domestic audience, which will decide in November whether he gets another chance at the presidency.

During the U.N. session, which ends October 1, world leaders will again take up a host of pressing humanitarian issues, including poverty, global warming, women’s empowerment and the prospect of renewed conflicts in sub-Saharan Africa. But the Middle East and the 18-month civil war in Syria are expected to remain center stage.

Later Tuesday, French President Francois Hollande is scheduled to take the lectern and is expected to address a worsening crisis in the Sahel, where a deadly mix of drought, famine and Islamic militancy have plagued the North Africa region.

U.N. Secretary-General Ban Ki-moon also mentioned that situation, saying in his opening remarks that “the crisis in the Sahel is not getting sufficient attention and support.”

Ban also said Tuesday that he sought to “sound the alarm” regarding a variety of intractable global issues, including the conflict in Syria.

“Brutal human rights abuses continue” in Syria, and are perpetrated mainly by the government, he said, while acknowledging abuses by anti-regime forces as well.

Ban, who has been critical of Syria’s al-Assad, called the situation there “a regional calamity with global ramifications.”

He also touched on the issue of Palestinian statehood, saying that the Palestinian territories must be able to realize “their right to a viable state of their own.”

A “two-state solution is the only sustainable option,” he said.

The U.N. chief also cautioned against the spread of inequality, climate change, and emerging and ongoing conflicts in places like Afghanistan, Democratic Republic of the Congo, Sudan and South Sudan, Somalia and Libya.

“People want solutions and progress today,” he said, calling for sustainable solutions to the variety issues confronting developing nations. “Our duty is to respond to these frustrations.”

On Monday, the General Assembly convened a high-level meeting on the rule of law that sought to highlight the importance of existing international treaties as well as the International Criminal Court.

“The wider body of international law developed at the United Nations gives the international community a basis to cooperate and peacefully resolve conflicts and the means to ensure that there is no relapse of fighting,” said Ban.

During a separate U.N. meeting on Haiti, which included actor-activist Sean Penn, Haitian Prime Minister Laurent Lamothe called on aid groups to do more to assist the earthquake-ravaged Caribbean nation.

“Haiti has no social protection system,” the prime minister said, noting that part of the problem stemmed from a lack of government services outside the capital of Port-au-Prince.

More than two years after the 2010 quake forced an estimated 1.5 million residents into makeshift housing, Lamothe said about 400,000 of them are still waiting to be relocated.