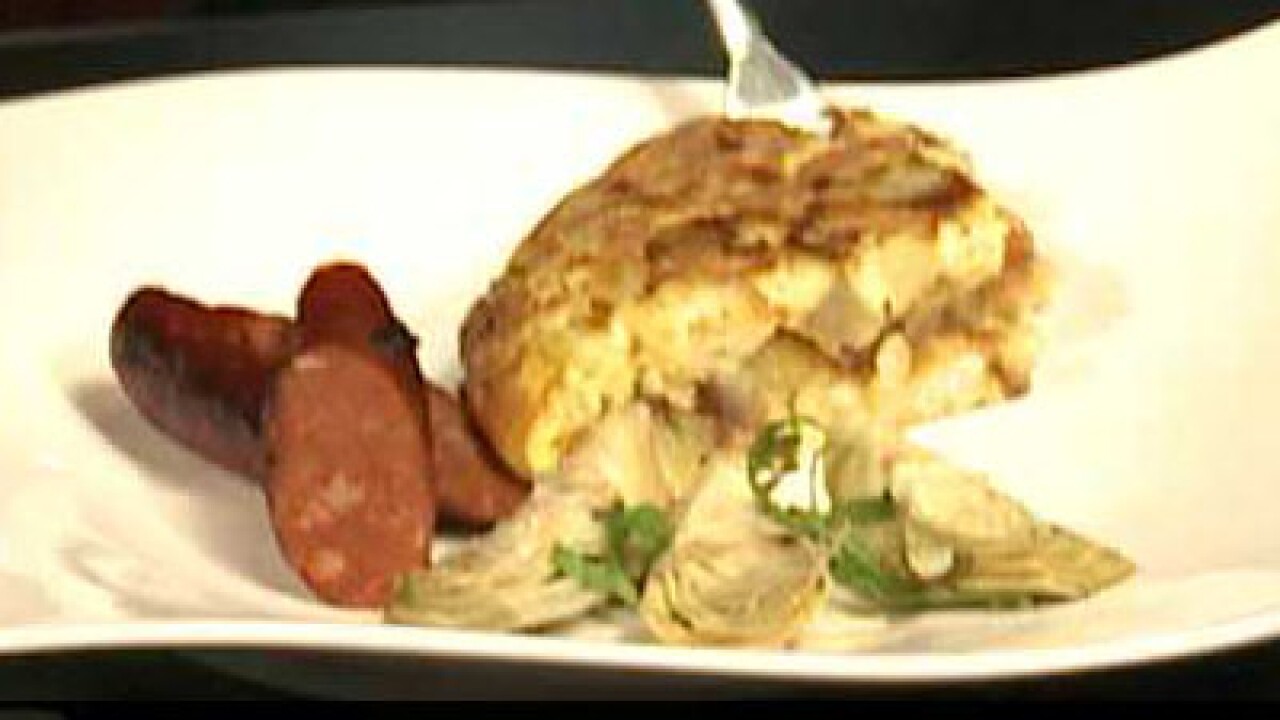 No doubt about it, the Tortilla Espanola or Spanish Omelet is the most commonly served dish in Spain. It is also called Tortilla de Patata or Potato Omelet. Bars and cafés serve it as a tapa or appetizer, but it is often served as a light dinner in Spanish homes. Because it is easy to transport, the Spanish make bocadillos or sandwiches by placing a piece between two pieces of a baguette.

There are lots of variations of tortillas or omelets and a few are listed at the bottom of this recipe.

This Tortilla Espanola or tortilla de patata makes 8-10 servings as an appetizer, or 6 servings as a main course.

Dice the peeled potatoes in ½” dice. Peel and chop the onion into 1/4″ pieces. Put potatoes and onions into a bowl and mix them together. Salt the mixture.

In a large, heavy, non-stick frying pan, heat the olive oil on medium high heat. Carefully place the potato and onion mixture into the frying pan, spreading them evenly over the surface. The oil should almost cover the potatoes. You may need to turn down the heat slightly, so the potatoes do not burn.

Leave in pan until the potatoes are cooked. If you can poke a piece of potato with a spatula and it easily breaks in two, your potatoes are done. Remove from the pan with a slotted spoon or spatula and allow oil to drain.

Crack the eggs into a large mixing bowl and beat by hand with a whisk or fork. Pour in the potato onion mixture. Mix together with a large spoon.

Pour 1-2 Tbsp of olive oil into a small, non-stick frying pan (approx. 9-10”) and heat on medium heat. Be careful not to get the pan too hot because the oil will burn – or the tortilla will! When hot, stir the potato onion mixture once more and “pour” into the pan and spread out evenly. Allow the egg to cook around the edges. Then you can carefully lift up one side of the omelet to check if the egg has slightly “browned.” The inside of the mixture should not be completely cooked and the egg will still be runny.

Slide the omelet onto a plate to serve. If eating as a main course, cut the omelet into 6-8 pieces like a pie. Serve sliced French bread on the side.

If you are serving as an appetizer, slice a baguette into pieces about 1/2 inch think. Cut the tortilla into 1.5” squares and place a piece on top of each slice of bread.

It is simply delicious served with sofrito, fried tomato sauce that is made all over Spain. Tomatoes, onions, garlic, green peppers and olive oil sautéed in a frying pan.

How do you know when oil is hot enough to fry the potatoes and onions? Drop a single piece of potato or a bit of bread into the oil. It should sizzle.

Remember to watch the heat while frying. If the oil is too hot, the potatoes will brown rapidly on the outside, but will be raw on the inside.

After frying potatoes, place the potato and onion mixture in a colander for a few minutes to allow more oil to drain. If you do this, place a plate underneath to catch the olive oil and you can use it again.

The following are a few of the most popular variations to the classic Tortilla Espanola.

Green Pepper – Add 1 green or red bell pepper (chopped) to the potatoes and onions and fry.

Chorizo – Slice a Spanish chorizo sausage and add to the potato and onion mixture after frying. Or, simply slice Spanish chorizo and combine with beaten eggs in the frying pan.

Ham – Using a couple thick slices (1/4″) ham, finely chop them. Then add the pieces to the potato and onion mixture after frying. Canadian bacon or smoked ham that you buy in a deli work well for this variation. Be careful to adjust the salt accordingly, since ham may be salty!