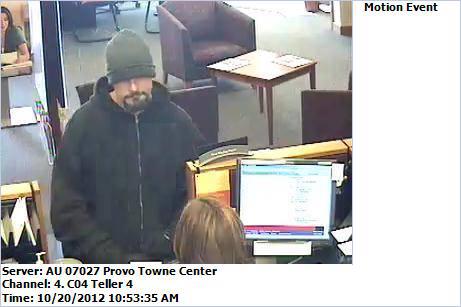 PROVO, Utah – Police in Provo are looking for a man who robbed the Wells Fargo Bank on Saturday morning.

Provo Police says a man walked into the Wells Fargo Bank at 66 West and 1200 South just before 11 a.m. and gave the teller a handwritten note saying, “Give me all your money.” He didn’t display a weapon during the incident. After receiving money, the suspect fled on foot northbound.

Provo officers arrived within minutes, but where unable to locate the suspect. He’s described as white, in his early 30s, approximately 6-feet-3-inches tall and 230 pounds. He was wearing a zip-up black hoodie,a green beanie and blue jeans. The suspect had short brown hair and a goatee.