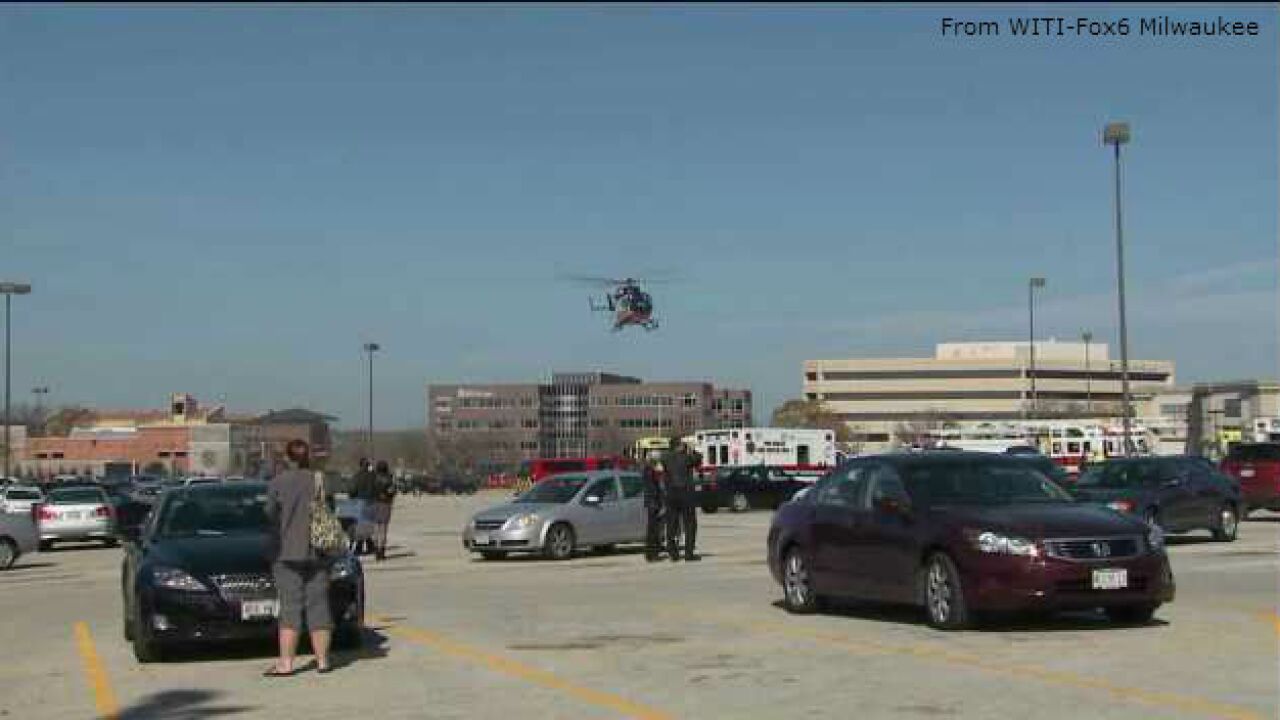 (Wisconsin police: After domestic violence arrest, suspect kills 3 — and himself
By the CNN Wire Staff

Three days ago, the 45-year-old man was issued a restraining order mandating that he stay away from her for the next four years.

And now he is dead.

But not before, police say, Haughton gunned down seven women — killing three of them — inside the same Azana Salon and Spa in Brookfield, while also using flammable liquid to fuel a fire.

“We were expecting an armed encounter if we did come across him,” said Tushaus, about authorities’ intensive search of the roughly 9,000-foot building and one “locked area” in particular. “When we did eventually get into that locked area, we did determine that he, in fact, was dead.”

Authorities are still working to identify the victims, including to determine if one of them is Haughton’s wife. And they are also trying to make sense of why it all happened.

The first calls came into police around 11 a.m. CT (noon ET), of an active shooter across from the Brookfield Square Mall and near the Westmoor Country Club, all about 11 miles west of Milwaukee.

Swarms of law enforcement officers, from various agencies, soon converged on the scene. They found smoke in the building — from a fire believed to be started by Haughton, according to Tushaus.

Inside, too, was a small propane tank. The police chief said it wasn’t clear if the suspect left it there, or if it had been left by contractors working on the building. The sprinkler system kicked in before the tank could explode.

By then, authorities did not know exactly where the gunman was or what carnage he’d left behind. And calls continued coming in from panicked people who’d sought refuge in pockets inside the large, multi-story building.

Outside, one young woman recalled to CNN affiliate WDJT seeing “a lady crawling out the front door,” having rolled down a hill. Next out was a shrieking woman, the witness added.

“And then maybe 10 people began running out of the back of the salon with their hands up — running, screaming out the door,” she said.

Four gunshot victims also soon got out of the salon, and then were transported to Froedtert Hospital in Milwaukee. That medical facility was locked down as the manhunt continued for the shooting suspect.

Hours later, around 4 p.m., authorities found Haughton’s body and declared the nightmare over.

“Our community can feel safe,” Tushaus said at an early evening press conference. “We are not seeking any additional suspects.”

Authorities described a contentious recent history between the suspect and his wife.

The restraining order against Haughton was filed four days after the October 4 tire slashing, according to Tushaus, with the four-year restriction being dictated last Thursday.

Steven Rinzel — the police chief in Brown Deer, the Wisconsin community that Haughton called home — acknowledged police “have had contacts” with the suspect in the past, including a recent “disorderly conduct, domestic violent arrest.”

And authorities were back at Haughton’s home Sunday, conducting “a safety search of the residence to make sure there was nothing in place, like an explosive device,” Rinzel said.

Meanwhile about 14 miles south in Milwaukee, staffers at Froedtert Hospital treated the four women who’d been shot in the chaos.

While there was no immediate breakdown as to how many of these victims were employees and how many were clients, Brookfield fire Chief Charlie Myers said they ranged in age from 22 to 40-years-old.

Dr. Gary Seabrook, the hospital’s director of surgery, early Sunday evening explained one victim is in critical condition, another is “in satisfactory condition,” a third “is being stabilized” and will have surgery, and the fourth has been admitted but will not need surgery.

The spa where Sunday’s shooting took place is about half a mile from a Sheraton hotel where a gunman killed seven people and himself in March 2005. Terry Ratzmann, 44, burst into a service being held by a Living Church of God congregation and fired 22 rounds before shooting himself.

For more from WITI, our FOX affiliate in Milwaukee, visit fox6now.com.