The crash occurred at approximately 10:30 a.m near 2950 South and 200 West, according to a Utah Transit Authority spokesman.

Investigators say everything with the crossing was working fine, but the man, identified as 57-year-old Larry R. Aullman of Salt Lake City, drove his car around or under the crossing and was broadsided by the commuter train. His car was pushed at least 100 feet down the tracks by the train.

Passengers and nearby workers scrambled to help Aullman, who had become trapped in his car. Emergency crews used a hydraulic metal-cutting machine to get him out.

“One of the police officers broke out the back window so we could get to him because you couldn’t open the doors and I was holding his head until the fire department got there,” said Barbara Hake, who was on the TRAX train. “They had to cut open the car to get him out.”

Aullman was transported to the hospital in serious condition where he later died.

Due to the crash, TRAX trains were unable to proceed between Meadowbrook and Central Pointe stations, causing significant delays for some mass transit commuters. Both TRAX lines were reopened by 1 p.m. 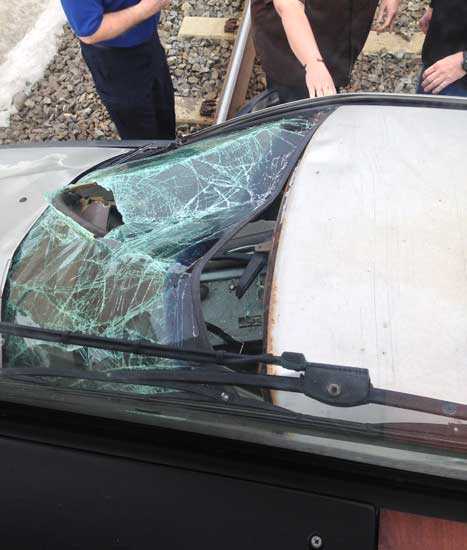