FARMINGTON, Utah – Police are looking for the suspect in the robbery of a Zions Bank in Farmington on Wednesday.

Police say a man entered the bank at 1663 North Main Street just before 6 p.m. Wednesday and demanded money before fleeing on foot. He didn’t show a weapon or say that he was armed.

The suspect is described as a white man in his early 20s, about 6 feet tall with a “youngish” voice. He was wearing jeans, a blue sweatshirt with the hood up and a mask. Witnesses reported seeing the suspect get into a tan car without license plates.

Anyone with information about the robbery is asked to contact Farmington police at 801-451-5453. 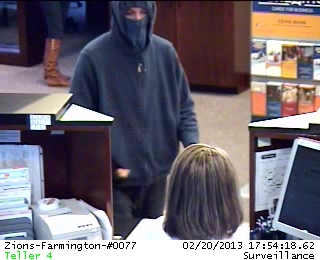