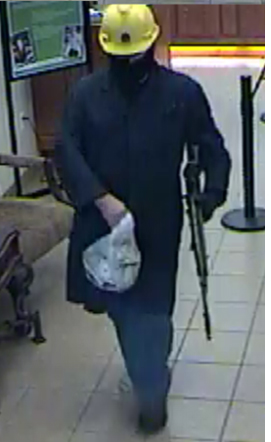 OGDEN, Utah — Ogden police and the FBI are searching for a suspect who robbed a credit union while wearing a mask and wielding a rifle.

The suspect entered the Wasatch Peaks Credit Union located at 3012 South and 1900 West shortly before 1 p.m. on Saturday. The suspect used a rifle to carry out the robbery, according to a press release from the Ogden City Police Department.

The suspect, pictured above, is described as an approximately 5-feet-8-inches tall white male who weighs about 180 pounds. He was last seen wearing a long blue coat, a mask, jeans and a yellow hard hat.

Ogden police are working with the FBI to investigate the robbery. Anyone with information regarding the incident is asked to call the FBI at 801-395-2004.