(CNN) — The FBI on Thursday released photos and video of two men it called suspects in the deadly bombings at the Boston Marathon and pleaded for public help in identifying them. 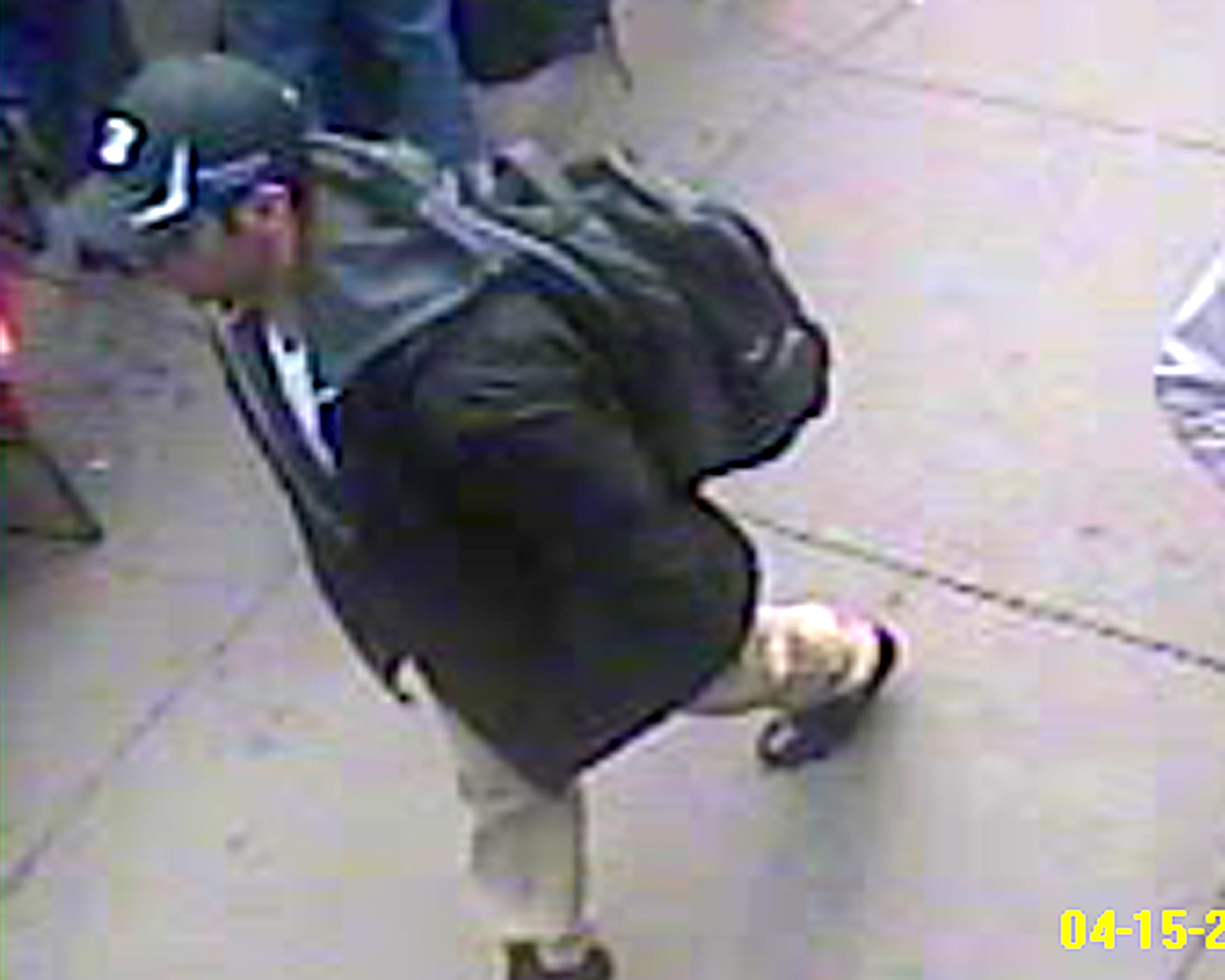 The two men were photographed walking together near the finish line of the marathon before the explosions that killed three people and wounded about 180. One of the two men was seen setting down a backpack at the site of the second explosion “within minutes” of the blast, said Special Agent Rick DesLauriers, the head of the FBI’s Boston office.

“Somebody out there knows these individuals as friends, neighbors, co-workers or family members of the suspects,” DesLauriers said. “And though it may be difficult, the nation is counting on those with information to come forward and provide it to us.”

But he cautioned that the men should be considered armed and “extremely dangerous.”

The announcement capped a day in which President Barack Obama brought a mixture of reassurance and defiance to an interfaith memorial service in the city's Cathedral of the Holy Cross. Whoever planted the bombs "picked the wrong city" to attack, he said.

"Every one of us stands with you," Obama told the crowd. "Boston may be your hometown -- but we claim it, too. ... For millions of us, what happened on Monday is personal."

Addressing the still-unknown perpetrators, Obama added, "Yes, we will find you. And yes, you will face justice. We will hold you accountable." And he looked ahead to next year's race, predicting that "the world will return to this great American city to run even harder and to cheer even louder for the 118th Boston Marathon. Bet on it."

Among the crowd of about 2,000 were first lady Michelle Obama; the president's Republican challenger last November, former Massachusetts Gov. Mitt Romney; the state's current governor, Deval Patrick; and Boston Mayor Thomas Menino. During an interlude, attendees were soothed by a performance by famed cellist Yo-Yo Ma.

Menino praised each of the three bystanders who were killed in the blasts -- Martin Richard, described as a "young boy with a big heart"; Krystle Campbell, whose spirit "brought her to the marathon year after year"; and Lingzu Lu, who "came to the city in search of an education."

The audience also included scores of police officers and other first responders. Crowds erupted in cheers as the cathedral emptied out at the end of the service, while others sang the national anthem.

Obama later stopped at a high school to thank a group of first responders and volunteers, and the first lady met with patients, families and hospital staff at Boston Children's Hospital and Brigham and Women's Hospital, the White House said.

Meanwhile, behind the scenes, investigators were combing through surveillance video dating to at least a week before the bombings to try to identify anyone who walked the finish-line route before the race, said a source who receives regular updates on the investigation.

On Wednesday, a law enforcement official who is being regularly briefed on the investigation told CNN's Susan Candiotti that images showing two men near the marathon finish line were being circulated to state and federal law enforcement agencies. The source described the men as "possible suspects."

But a source told CNN's Deb Feyerick on Thursday that those individuals are no longer of high interest to investigators.

The men faced scrutiny and were considered potentially important to the case because one of them had been carrying a black backpack close to one of the bombing sites.

"There is some video that has raised the question of those that the FBI would like to speak with," she said. "I wouldn't characterize them as suspects under the technical term."

She said the investigation is "proceeding apace."

Federal authorities were also contacting the maker of a battery found amid the debris of the blasts, said Benjamin Mull, a vice president at Tenergy Corporation. One of the firm's batteries was found in the aftermath of the attack, connected to some wires and a piece of plastic. The battery is typically used in remote-controlled hobby cars, Mull told CNN's Joe Johns.

And on Wednesday, two sources with knowledge of the investigation identified a man as a possible suspect in the attack but did not name him.

Seen on a video, the man wore a white baseball cap. One of the sources added that the cap was on backward and the man was also wearing a light-colored hooded sweatshirt and a black jacket.

The reports came after a chaotic day in which some law enforcement sources initially told media outlets that a suspect had been arrested, only to have the FBI and Boston police issue formal denials that any suspect was in custody.

Patrick urged patience to allow investigators space to do their job.

"I wish they had nailed the perpetrator within minutes of this catastrophe, but I understand from experience it's going to take some time," he said.

Investigators say the bombs, which exploded 12 seconds apart, were designed to deliver the most vicious suffering.

One was housed in a pressure cooker hidden inside a backpack, the FBI said. The device also had fragments that may have included nails, BBs and ball bearings, the agency said.

The second bomb was in a metal container, but it was unclear whether it was in a pressure cooker as well, the FBI said.

Photos obtained by CNN show the remains of a pressure cooker found at the scene, along with a shredded black backpack and what appear to be metal pellets or ball bearings.

They were sent to the FBI's national laboratory in Virginia, where technicians will try to reconstruct the devices.

In the past, the U.S. government has warned federal agencies that terrorists could turn pressure cookers into bombs by packing them with explosives and shrapnel and detonating them with blasting caps.

While the clues moved the investigation forward, it is still unclear whether the attack was an act of domestic or foreign terrorism.

Authorities sifted through thousands of pieces of evidence and a mass of digital photos and video clips. They have pleaded for the public's help in providing additional leads and images.

More than 60 people remained hospitalized Thursday in Boston-area medical centers, seven of them in critical condition, according to hospital officials.

The three dead include:

• Richard, the 8-year-old boy with a gap-tooth grin and bright eyes. He loved to run and play in his yard.

• Campbell, a 29-year-old freckle-faced woman described by her mother as having "a heart of gold."

• Lu, the Chinese graduate student at Boston University who had moved to the city last fall, making friends and soaking up new experiences.

The U.S. State Department has been in contact with her family and the Chinese Foreign Ministry, Secretary of State John Kerry said in a statement released Thursday.

"We stand ready to provide whatever appropriate assistance we can to the family members of foreign nationals in the aftermath of this despicable act of terror," Kerry said.