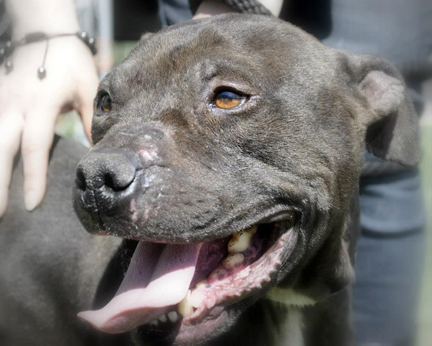 HOLBROOK, Idaho – Some of the pit bulls recovered from the Holbrook home where a triple homicide occurred earlier this month are now up for adoption.

Sixty-three dogs were sent to the Idaho Humane Society after they were recovered from the home, the site of an apparent dog-fighting ring. Twelve of those are now up for adoption.

Three adults, Trent Jon Christensen, 32, Yavette Chivon Carter, 27, and Brent L. Christensen, 61, were found shot to death inside a home off Highway 38 in Oneida County, Idaho. There were two children found inside the home, alive and unharmed.

A search of the home also found 63 pit bull dogs and puppies. Oneida County Sheriff Jeff Semrad said the animals were either being sold or raised to fight in a ring found outside the home.

The Oneida County sheriff told Local News 8 in Idaho that the dogs likely fed on other dogs.

“Occasionally they will grind up the meat of a dog that dies and feed to the other dogs,” Semrad told Local News 8. “We found a dead dog in the freezer and a grinder nearby.”

According to a press release from the Idaho Humane Society, the dogs were found to be in “very poor body condition.” They say most of the dogs are underweight and suffering from malnutrition.

Many of the dogs had open wounds and extensive scarring from old wounds, and skin, eye and ear ailments resulting from neglect, IHS says. Some have old injuries of broken bones that were left untreated.

Bad Rap, a non-profit organization that focuses on advocacy, education and adoption of pit bull dogs, worked with the Idaho Humane Society to evaluate the dogs.

They determined that approximately one dozen of those pit bulls will be available for adoption within the next few weeks. The rest of the dogs are continuing to be evaluated and treated.

Based on evaluations, IHS says that ten to 12 of the dogs are not temperamentally suitable for adoption placement.

For more on the adoptions, visit www.idahohumanesociety.org.