CLEVELAND (CNN) — The baby Amanda Berry gave birth to while she was held captive in a Cleveland home was delivered by another one of the young women in the house, according to a police source familiar with the investigation.

The information was corroborated in a police report seen by CNN. When Berry went into labor, Ariel Castro, now charged with kidnapping and rape, grabbed captive Michelle Knight and told her to deliver the baby.

The baby was born into a plastic tub or pool to contain the afterbirth and amniotic fluid.

When the baby was born, it stopped breathing and everyone started screaming, the source said, citing the girl’s account. Castro allegedly said, “if that baby dies, I’m going to kill you.”

“What’s most incredible here is that this girl who knows nothing about childbirth was able to deliver a baby that is now a healthy 6-year-old,” the source said.

The three women spent their days and nights captive at 2207 Seymour Avenue, a 1,400-square-foot home in one of Cleveland’s oldest neighborhoods. They went outside only twice in that span — just “briefly” at that — Cleveland public safety director Martin Flask said.

More often, the three would be in different rooms, though they interacted occasionally and came to “rely on each other for survival,” said a law enforcement source with direct knowledge of the investigation.

One thing they could count on was that their alleged captor would never let them out.

Castro would often test Berry, Knight and Georgina “Gina” DeJesus, the young women he’d allegedly abducted, by pretending to leave, said the law enforcement source. He’d return suddenly: If there were indications any of the women had moved, they’d be disciplined.

Years went by. In that time, the women saw their parents on television at vigils held for them, according to the law enforcement source. They got emotional, knowing their loved ones were looking for them.

And in time, Knight and DeJesus “succumbed” to “their reality,” the law enforcement source said.

But “something must have clicked” for Berry on Monday evening, said Cleveland’s deputy police chief Ed Tomba. She staged a daring escape, and with the help of Castro’s neighbors Charles Ramsey and Angel Cordero, freed herself, her 6-year-old daughter, Knight and DeJesus.

On Wednesday night, Castro, the man who allegedly held them against their will for so many years, was behind bars.

He’ll be arraigned Thursday morning on four counts of kidnapping and three counts of rape tied to the case, said Victor Perez, chief assistant prosecutor for the city of Cleveland.

The women found in his home, meanwhile, are back with family — the same relatives who cried and struggled but, for the most part, never gave up hope.

“I knew my daughter was out there alive,” said Felix DeJesus, Gina’s father, moments after she arrived Wednesday afternoon at a family home in Cleveland. “I knew she needed me, and I never gave up.” 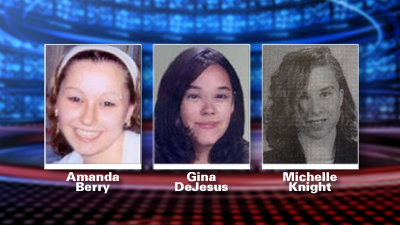 Lured into a vehicle, then trapped in a home

Knight was 21 on August 22, 2002, when Castro lured her into his vehicle along Cleveland’s Lorain Avenue, according to charging documents. Castro took her back to his home on Seymour Avenue, about three miles away, and didn’t let her go.

In that time, Knight was sexually assaulted repeatedly, the documents state. But soon, she wasn’t alone.

The next year — on April 21, 2003, the eve of her 17th birthday — Berry experienced the same nightmare scenario. While walking home from her job at Burger King that night, she too took a ride from Castro on Lorain Avenue.

Almost exactly a year later, they were joined by DeJesus, then all of 14 years old.

They remained in that hell until Monday evening, when Berry screamed for help. Hearing her cries, Ramsey and Cordero kicked in a door to help her escape.

According to Cordero, Berry’s 6-year-old daughter ran out of the house too, wearing only a diaper and a sullied shirt. Police are conducting a DNA test to determine the child’s paternity.

Cleveland police Chief Michael McGrath told NBC’s “Today” show that the women were bound and that there were “chains and ropes in the home.”

There were no apparent constraints Monday, the law enforcement source with firsthand knowledge of the investigation said. Yet Knight and DeJesus didn’t run out of the house with Berry although they could have, the source said, describing them as brainwashed and fearful.

‘Ariel kept everybody at a distance’

So how did this all happen in an urban neighborhood? Did Castro, a former school bus driver and upbeat and “outgoing” musician, according to one bandmate, keep such a secret from not only his neighbors but his family, as police allege?

Soon after the three women were found, Castro and two of his brothers who were with him were taken into custody.

Over the next two days, authorities officials “found no facts to link” Onil and Pedro Castro to the kidnappings — though both brothers will appear in Cleveland Municipal Court on Thursday related to outstanding warrants on misdemeanor cases on other matters.

“Ariel kept everybody at a distance,” Tomba said of the suspect, explaining why even his brothers and other family members (Castro talked on Facebook about having five grandchildren) apparently were in the dark.

Castro has been talking to investigators since Tuesday, as have the three young women police say he kidnapped and raped.

After those conversations, Tomba said he doesn’t believe there are other victims — including Ashley Summers, who was 14 when she went missing in the same part of Cleveland in 2007 — or anyone other than Castro involved.

And since Monday, law enforcement personnel have combed through Castro’s Seymour Avenue home — which Tomba said was in “disarray” when officers first went in — and removed more than 200 items that they hope will let them piece together what happened.

Additionally, FBI agents searched a boarded-up home two doors down after obtaining information over the past few days tying that building to the case, the deputy police chief explained.

Second-guessing if more could have been done

As they investigate, authorities are facing second-guessing as to whether any of this could have been prevented. Some comes from neighbors who say they contacted police about suspicious activity on Castro’s property such as reports of screaming and naked women in his backyard. Authorities say they never got any such calls.

In fact, police say they had only been to Castro’s house twice, once after he called about a fight on his street and in 2004 to investigate an incident in which he was accused of leaving a child alone on a bus. No one answered at the home, and investigators later interviewed him elsewhere, police said.

And according to court documents from 2005, Castro’s former common-law wife accused him of repeatedly abusing her, including breaking her nose twice, breaking two ribs, dislocating her shoulder twice and knocking out a tooth. A judge granted a protection order but lifted it three months later.

Tomba, for one, said he doesn’t think authorities dropped the ball.

“I’m just very, very confident (that) law enforcement officers … checked every single lead, and if there was one bit of evidence (they would have) followed it up very, very aggressively,” he said.

“In hindsight, we may find out that maybe we did, but that’s going to be in hindsight.”

For the first time in years, relatives of Berry, DeJesus and Knight — whom Perez described Wednesday as “safe and healthy” — don’t have only memories to fall back on. They can look forward, and move on with their lives.

Barbara Knight told “Today” that, as of Wednesday, she still hadn’t talked with her daughter Michelle. Michelle Knight, now 32, was then in a Cleveland hospital in a good condition.

“She’s probably angry at the world, because she thought she would never be found,” Barbara Knight said. “But thank God that somebody did.”

Asked what she would tell her daughter, her mother said, “I love you and I missed you all this time.”

Well-wishers welcomed Berry and her daughter on Wednesday to a family home in Cleveland that was decorated with balloons and stuffed animals.

“We are so happy to have Amanda and her daughter home,” said her sister, Beth Serrano.

A similar scene played out at a DeJesus family home, where relatives embraced their long-lost relative.

Sandra Ruiz said that her niece, DeJesus, is “ecstatic” to be back with her relatives. When the now 23-year-old arrived at the house, “she was happy, she looked at the house and she wanted a tour.”

“What more can she say — her face, her expression, her smile, (her) hugging says it all.”