SALT LAKE CITY – The FBI Salt Lake City Division is offering a $5,000 reward for information that leads to the arrest and conviction of a bank robber.

Police say the man, dubbed the ‘Duffel Bag Bandit,’ has hit several banks in Utah and Idaho. Detectives know of six banks he’s hit since December 2012. They include:

The suspect is described as white, 50 to 60 years old, with short gray hair. He’s 5’9″ to 6’0″ tall, weighing between 145 to 180 pounds. He has been seen carrying a red duffel bag. During each robbery he has either verbally demanded cash, or displayed a note. No weapon has been reported.

Anyone who may know the man’s identity is asked to call the FBI Salt Lake City Division at (801) 579-1400. The public is reminded not to approach the suspect. 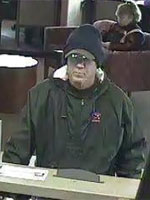