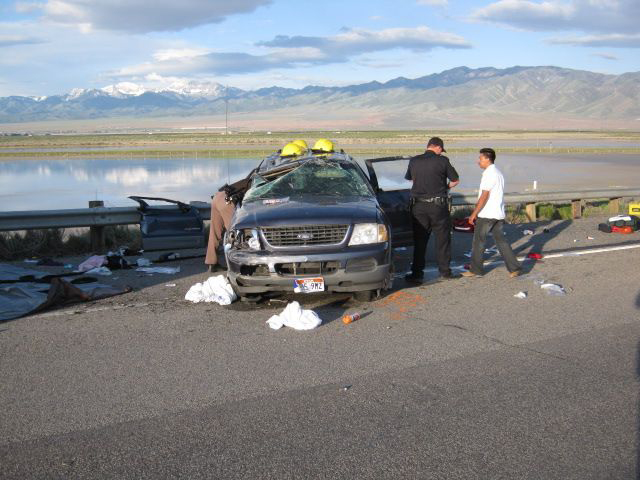 GRANTSVILLE, Utah — Five people were hospitalized after a rollover accident in Tooele County early Sunday morning, and only one of the victims was wearing a seat belt.

According to a press release from the Utah Department of Public Safety, it appears the driver of the vehicle, 19-year-old Maria Lucia Reyes-Estrada, began to drift left before overcorrecting and going to the right, and then to the left again. The vehicle rolled multiple times before coming to a rest on its wheels. The vehicle’s speed was estimated at 90 mph.

Three of the five people in the vehicle were ejected as the vehicle rolled, and one person was thrown from the driver’s seat to the middle seat. The victim wearing a seat belt, Mari Merceded-Reyes, was the only one to remain in her seat. The three males who were ejected were seriously injured. Police later identified one of those males as Nichols Reyes-Estrada.

I80 was closed for about 45 minutes while three medical helicopters landed on the interstate and transported the victims. All five victims were taken to a hospital.

As of Sunday at 4:30 p.m., all of the victims were in stable condition

“No one should ever be without a seat belt in a moving vehicle. Seat belts save lives and protect you from serious injury,” officials said in a press release.