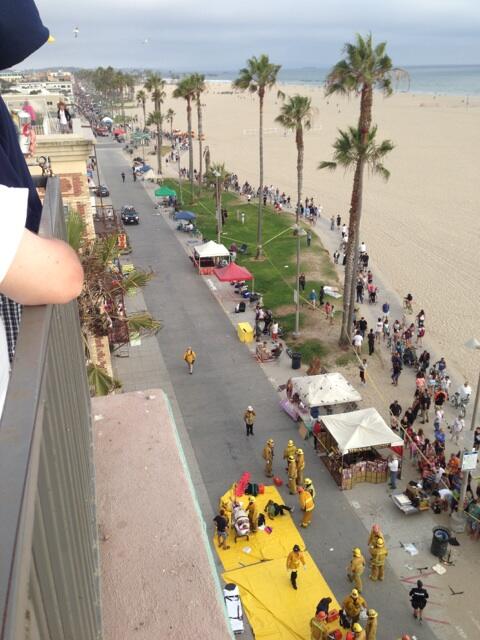 LOS ANGELES (CNN) — A man who sped down Venice Beach’s crowded boardwalk Saturday evening looked like he wanted “to create mayhem and massacre a lot of people,” a witness said.

One woman was killed, and a Los Angeles County coroner’s office spokeswoman identified her as Alice Gruppioni, 32, of Italy. Her husband told police they were on their honeymoon, a law enforcement source told CNN.

Nathan Campbell, 38, was charged with murder after he turned himself in to police hours after the incident, Los Angeles Police Department spokeswoman Rosario Herrera said Sunday. Campbell is being held on $1 million bond, she said.

“There no indication that he knew anybody that he hit,” LAPD Cmdr. Andy Smith said. “It looks like this guy wanted to run over a bunch of people. One guy bent on doing evil.”

Of the dozen people injured, one victim was critically hurt and two others suffered serious injuries, officials said.

The driver eventually stopped the car and ran away.

“It was horrible. I mean it was like something out of a movie, something you would never expect to see,” witness Katherine Blackburn told CNN affiliate KABC.

It was two hours before sunset on a beautiful Saturday evening — one of the busiest times of the week at the Venice Beach Boardwalk.

“This guy had an intent to create mayhem and massacre a lot of people,” Dave Blackburn told CNN affiliate KCAL.

The Blackburn family was dining on the sidewalk patio of the Candle Cafe & Grill when they saw a man get into a parked car and drive it around a corner onto the crowed boardwalk.

“The boardwalk was packed with people, and he sped up and purposefully — it looked like purposefully — was just swerving back and forth to run over as many people as he could,” said Laura Blackburn.

“There were people flying, laying on the ground, tents flying everywhere. If he wanted to kill people, he came on a perfect time, 5 p.m. on a Saturday in the summer in Venice Beach,” Los Angeles Fire Department spokesman Brian Humphrey said.

Numerous victims were hauled away on stretchers, their legs covered with blood, KCAL reported.

The crash took place on the Venice Beach Boardwalk, a popular tourist attraction on the west side of Los Angeles lined with hundreds of street vendors and performers.

This isn’t the first time someone drove into a crowd of pedestrians in Southern California.

In 2003, an elderly man accidentally plowed his car through a busy farmer’s market in nearby Santa Monica, killing 10 people and injuring 69.

CNN’s Janet DiGiacomo and Cheri Mossburg contributed to this report.