Suspects identified in traffic stop that led to police chase 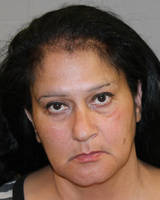 NEW HARMONY — A man and woman arrested Saturday during a traffic stop in Washington County were identified today.

Juan Zedepa-Valdez, 26, and Jeanette Jeanne Garcia, 45, both of Westminster,Colo., were booked into Washington County Jail on several drug charges and attempting to escape custody.

According to information from the Utah Highway Patrol, a trooper stopped a Chevrolet Impala with Colorado license plates that was traveling northbound on Interstate 15 after dispatchers had put out an attempt to locate on the vehicle due to reckless driving.

The trooper pulled the vehicle over near mile post 38 at about 2:45 p.m. There were two males and three females in the vehicle.
The trooper could smell marijuana in the vehicle, and Garcia reportedly pulled some marijuana out of her shirt and gave it to the trooper. The trooper arrested her, and he also found some heroin in one of her pockets.

The driver, Valdez, resisted arrest, but he was handcuffed without injury. The man dropped a loaded magazine for a handgun while struggling against the trooper.

Valdez was apprehended without incident, but responding units were unable to locate the passenger. The man was last seen in the New Harmony area. He is described as a Hispanic male with black hair and brown eyes. He was last seen wearing blue jeans and a teal shirt.

According to information from UHP officials, “It was reported that one of the male suspects tried to escape the area on a horse, but the horse was unwilling to aid the criminal.”

Authorities found a handgun with its serial number scratched off inside the vehicle. The gun was listed as stolen in the National Crime Information Center.

Garcia complained of a medical condition, and she was transported to Valley View Hospital. She was later released from the hospital and booked into the Washington County Jail.

Anyone with information on the passenger who fled the scene should contact dispatchers at 435-586-9445.