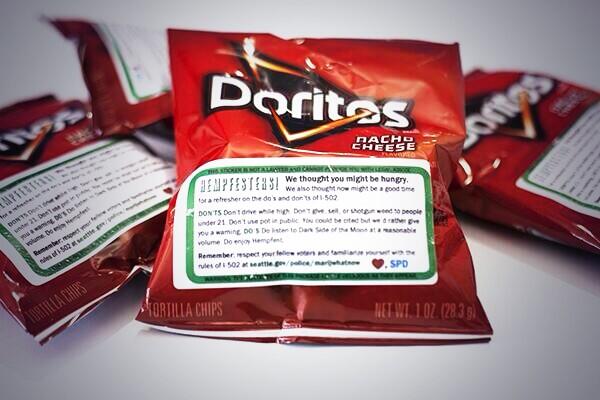 By Holly Yan and Elwyn Lopez

(CNN) — When Seattle pot smokers got the munchies this weekend, the cops had their back.

Now that marijuana is legal in Washington, there’s not much police could do about weed-toting revelers at the city’s Hempfest.

But they did want to explain the new rules surrounding recreational marijuana use in the state — and hit upon a novel distribution format: Doritos.

Sticking the cops’ messages on something edible was a no-brainer, Seattle police Sgt. Sean Whitcomb said.

“We knew if we did leaflets, it would turn into litter,” he said. “We wanted people to be able to access the information. It’s actually fun to read. We wanted to do it in a way that is deliberately ironic.”

Each bag contained some sage Dos and Don’ts.

The Don’ts included “Don’t drive while high,” and “Don’t use pot in public. You could be cited but we’d rather give you a warning.”

And the Dos? “Do listen to Dark Side of the Moon at a reasonable volume.”

The crowd ate it up.

In less than 30 minutes, police ran out of all 1,000 bags of chips during #OperationOrangeFingers.

Minor marijuana possession has been the Seattle’s police department’s lowest priority since 2003, but voters last year cast ballots to make recreational use legal.

Initiative 502 says residents over 21 years old may possess up to an ounce of pot for personal use. There are also guidelines for the possession of oils and edibles.

Hempfest, which began Friday and runs through Sunday, says its goal is “to educate the public on the myriad of potential benefits offered by the cannabis plant, including the medicinal, industrial, agricultural, economic, environmental, and other benefits and applications.”

“I initially said let’s try 500 Dorito bags, but we did a thousand. Ultimately our goal was to start a conversation,” Whitcomb said.

And it’s worked. Some even tried hawking the Doritos bags on eBay.

By the end of the giveaway, even the cops were feeling the effects of Hempfest.

“We’re headed home. Feelin’ kinda Spacey,” the department tweeted, with a picture of actor Kevin Spacey speaking into a walkie-talkie.

At least 1,000 revelers were cured of the munchies, with a little more knowledge of the state law and a little more orange on their fingers.