Robbers pose as Mormon missionaries, make off with cash, electronics 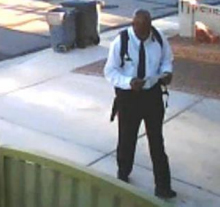 Dressed in black pants, white shirts and black ties and carrying backpacks, the two men walk up a driveway and step though a gate.

But their mission was anything but godly, say Las Vegas police, which released images of the men on Tuesday.

The two are accused of posing as missionaries to rob a family home.

They knocked on the victim’s door asking to talk about religion, police say. After about five minutes, they allegedly jumped and punched the homeowner.

His screams woke his wife and daughter. Both reportedly hid in their closets.

The two men took about $3,000 the family had been saving for a trip to Disneyland, along with three iPads and an iPod, KTNV reported.

Kristen Howey, a spokeswoman for The Church of Jesus Christ of Latter-Day Saints, called the crime “senseless.” The robbery took place on the morning of June 27.