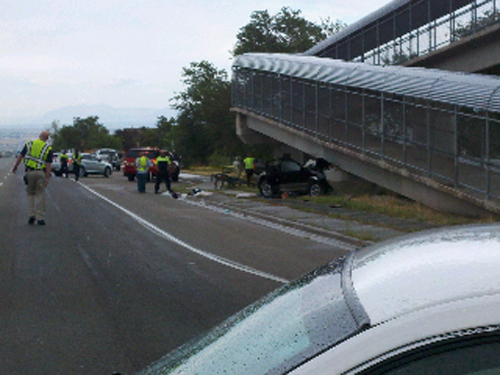 KEARNS, Utah – One person is dead after a vehicle accident in Kearns Friday, and a woman was taken by helicopter to a hospital in critical condition.

Officials said the 43-year-old driver of the vehicle died. He was later identified as 43-year-old James Randall Wilkes.

The female passenger had to be extricated from the vehicle before she could be transported. She was flown to the University of Utah Hospital.

A vehicle struck a pedestrian bridge. Lt. Justin Hoyal of the Unified Police Department said they are still investigating the cause of the wreck.

“That’s one of the things we’re going to look at through the investigation to see if there is any evidence of braking or what ultimately caused this driver to veer across all the travel lanes that are northbound and collide with this pedestrian bridge,” he said. “But right now we don’t know what caused him to do that.”