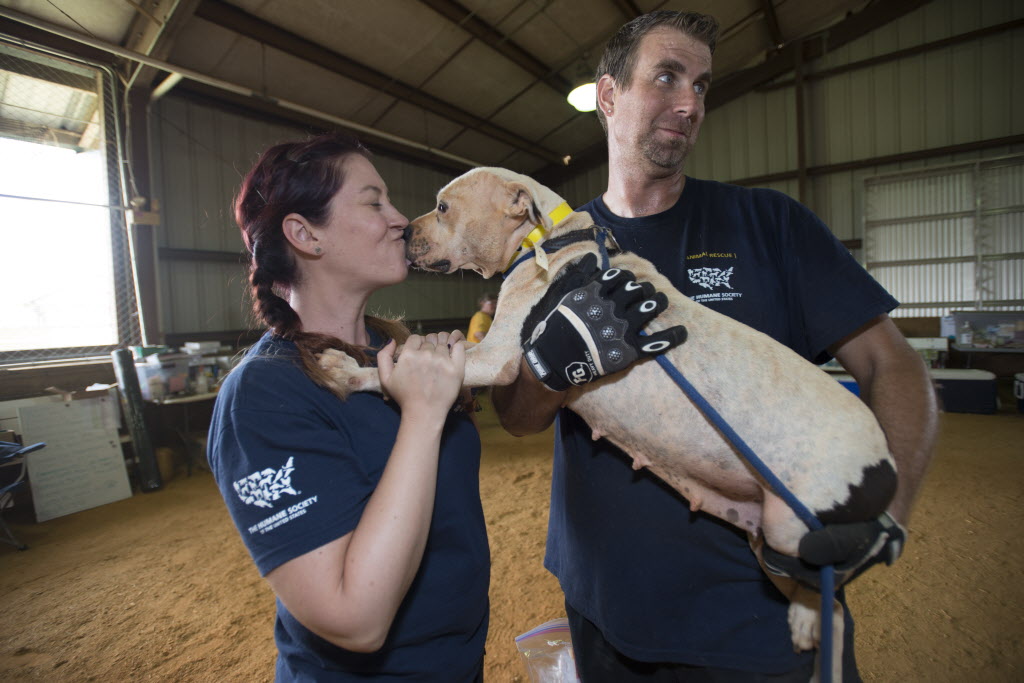 By Devon Sayers and Joe Sterling

(CNN) — The “lowest places in hell” are reserved for people who force animals to fight, an Alabama district attorney said Monday after announcing that more than 350 pitbulls have been rescued from a massive illegal dogfighting ring.

They rescued 367 pit bull terriers in Alabama and Georgia. Authorities arrested 11 people on Friday for violations of the federal dogfighting and gambling statutes.

Warrants were executed and arrests were made in Alabama, Georgia, Mississippi and Texas. The dogs were taken to temporary shelters in undisclosed locations.

“It’s really a sad day to me and a sad day of affairs in the state of Alabama to have to even indulge in this type of criminal activity and prosecution,” said U.S. Attorney George L. Beck Jr.

“I believe if Dante were alive today and were rewriting ‘The Inferno,’ that the lowest places in hell would be reserved for those who commit cruelty to our animals and to our children.” He was referring to “The Divine Comedy,” the epic poem by Dante Alighieri.

The U.S. Attorney’s Office in Montgomery, Alabama; the Auburn, Alabama, police; and the FBI teamed up with the Humane Society of the United States and the American Society for the Prevention of Cruelty to Animals to investigate the dogfighting and free the canines from captivity.

The result, the ASPCA said, was believed to be the second-largest dogfighting raid in U.S. history.

“Today, we ended the torture of hundreds of abused and neglected dogs,” said Matt Bershadker, president and chief executive officer of the ASPCA.

Many of the dogs appeared emaciated, the ASPCA said.

“In one yard, 114 dogs, the majority tethered to heavy chains, sat in 90 degree heat, scratching at fleas, with no fresh water or food visible anywhere on the property. Some appeared to have no access to water at all, and many exhibited wounds, scars and other conditions consistent with dogfighting,” the ASPCA said in a statement.

“Makeshift, filthy doghouses — many improvised from plastic and metal barrels and others made of chipboard with rotting wood floors and rusted metal roofing — provided the only shelter in the sweltering heat and humidity. Some dogs pulled at chains and cables that were tethered to cinder blocks and car tires. A female dog did her best to tend to six puppies, just weeks old, with no food or water, in a pen littered with trash and feces.”

A 30-count federal indictment charges that from 2009 to 2013, the 11 suspects conspired to promote and sponsor dogfighting and to possess, buy, sell, transport and deliver dogs for fighting.

“These dogfighters abuse, starve and kill their dogs for the supposed ‘fun’ of watching and gambling on a dogfight. Their behavior is deplorable, will not be tolerated, and will be punished to the full extent of the law.”